Eriksen was one of five summer signings as United bosses backed the new manager to the tune of almost £250million. The Dane – on paper at least – looks the shrewdest of those acquisitions, signing as a free agent after spending the second half of last season with Brentford.

And Eriksen has instantly shown he is still able to perform at the highest level, a year removed from the on-field cardiac arrest which almost took his life. The 33-year-old has instantly become a regular in Ten Hag’s line-up, starting each of the first six Premier League matches.

That’s in contrast to club captain Harry Maguire, who has been forced to watch from the sidelines after being relegated to the bench. Maguire had started the first two matches of Ten Hag’s reign, but after back-to-back defeats he was ousted in place of a Raphael Varane-Lisandro Martinez partnership.

In his absence, questions over the long-term captain have once again reared their head after reports the dressing room were divided over Maguire’s status last term. Ten Hag confirmed prior to the season getting underway that the England international would remain with the armband, although he has since clarified he uses a leadership group.

“That is a point we have to work on. I work always with a group of leaders, not one in particular. I spoke with the leaders about this issue,” he said last month. “It doesn’t have to be senior players but we have a core group who have to be the example and take the responsibility.”

With Maguire on the substitutes’ bench, Bruno Fernandes has taken on the responsibility of being captain, but former Arsenal midfielder Emmanuel Petit believes Eriksen is a better option. In backing the former Tottenham star, he also ruled out his compatriot Rapahel Varane for the job, claiming he is too introverted to lead. 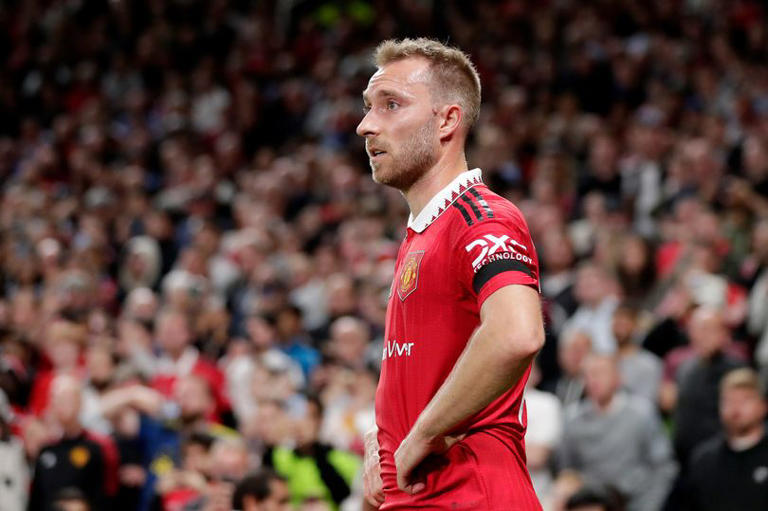 “Raphael Varane has played at a very good level, but he’s very shy and doesn’t have the temper or the personality to be the Manchester United captain,” Petit said, during an interview with LordPing.co.uk.

“The one player that should receive the Manchester United captaincy is Christian Eriksen. He has the personality and the character and he always gives the best version of himself on the pitch.”

For now, the captaincy will be the last thing on Maguire’s mind as he looks to wrestle back a starting place for his club ahead of this winter’s World Cup. But Ten Hag has already warned the £80million-man that just because he is the skipper, he won’t be guaranteed a place in his team.

“It doesn’t mean, when you are captain, you are established to always play, especially when you also have Varane in your squad,” the Dutchman added. “We have options. Varane’s stature is immense and in pre-season we took a decision to build him physically, so he had a bit of a slow start.

“But his profile, his stature and what he won in the past shows that he can really contribute to his team. For the team there is competition, and we need that. We have to cover so many games and we can do that in several constructions.

“We can see from game to game what we need, what can be the construction for Liverpool, but also as in the second-half in Brentford we played with Varane and Maguire in the centre, so there are many options. We have competition internally and that’s good – that’s what top teams need.”