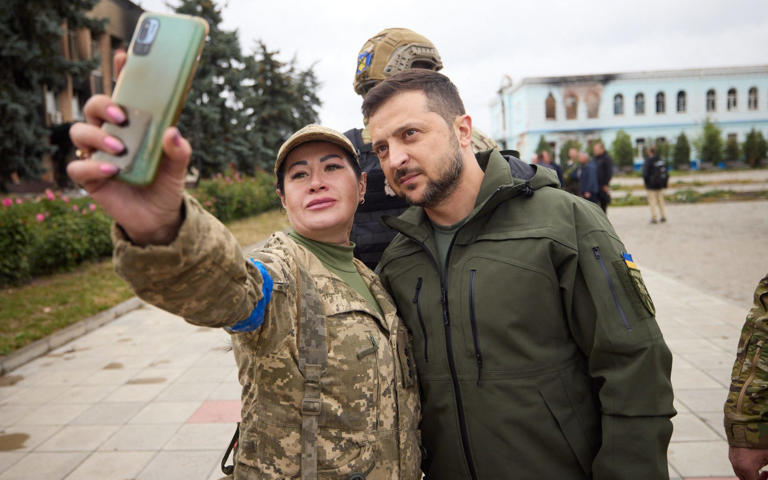 This handout picture taken and released by Ukrainian Presidential press service on September 14, 2022 shows Ukrainian president Volodymyr Zelensky (C) posing for a selfie with a servicewoman in the de-occupied city of Izyum, Kharkiv region. – Zelensky on September 14, 2022 visited the east Ukraine city of Izyum, the military said, one of the largest cities recently recaptured from Russia by Kyiv’s army in a lightning counter-offensive. (Photo by UKRAINIAN PRESIDENTIAL PRESS SERVICE / AFP) / RESTRICTED TO EDITORIAL USE – MANDATORY CREDIT© STR/UKRAINIAN PRESIDENTIAL PRESS SER/AFP via Getty Images

Ukrainian President Volodymyr Zelensky has escaped without injury after he was involved in a car accident on Thursday, his office said.

The president was travelling in a motorcade through Kyiv on Wednesday when a motorist collided with his vehicle.

“In Kyiv, a passenger car collided with the car of the President of Ukraine and escort vehicles,” spokesman Sergiy Nikiforov said in a statement on Thursday morning.

“Medics accompanying the President provided the driver of the passenger car with emergency aid and transferred him to an ambulance,” he continued.

“The president was examined by a doctor, no serious injuries were detected. The law enforcement officers will investigate all the circumstances of the accident.”

No further details of the accident have been provided, though in a nightly address posted shortly after, Mr Zelensky said he had just returned from Kharkiv after making a surprise visit to Izyum.

The region has been the scene of a lightning offensive by Ukraine to reclaim swathes of Russian-occupied land. Ukrainian flags were recently hoisted over towns in the north east for the first time in months.

“In Kyiv, for my 3rd visit since the start of Russia’s war. So much has changed. Ukraine is now an EU candidate. I’ll discuss with Zelensky and [Prime Minister] Denys Shmygal how to continue getting our economies and people closer while Ukraine progresses towards accession,” she said.

Mr Habeck welcomed G7 trade ministers during a meeting at Neuhardenberg Castle in the state of Brandenburg on Thursday, Reutes reported earlier.

According to a UK intelligence assessment, the Russian army has left behind kit which was “essential” to its “artillery-centric” approach to the invasion.

This is said to include one ZOOPARK counter-battery radar and an IV 14 command and control vehicle.

Video footage is appearing online which shows the aftermath of the crash involving Mr Zelensky’s car. He was not hurt according to officials and the wider circumstances are unclear.

Russian forces have largely withdrawn from the area west of the Oskil River, the MoD said in its daily intelligence bulletin on Twitter.

US, EU step up pressure on Turkey over Russia sanctions

The United States and European Union are stepping up pressure on Turkey to enforce Russian sanctions, the Financial Times reported on Thursday.

The United States is focusing on Turkish banks that have integrated into Russia’s Mir payments system, the paper reported citing two Western officials involved in the plans, as Brussels prepares a delegation to express its concerns to Turkish officials directly.

Putin, Xi set to meet on Thursday in Samarkand

The two leaders are in Samarkand to attend a meeting of the Shanghai Cooperation Organisation, a regional security group. They will also hold a three-way meeting with Mongolian President Ukhnaa Khurelsukh.

On Friday, Putin is set to meet the leaders of Azerbaijan, India and Turkey, it added in a statement

Ukrainian President Volodymyr Zelensky on Wednesday promised “victory” on a visit to the strategic city of Izyum that was recently recaptured from Russia.

The visit came at a decisive moment in Russia’s six-month-old invasion, with Ukraine expelling Moscow’s forces from swathes of the east and seriously challenging the Kremlin’s ambition to capture the entire Donbas region.

“Our blue-yellow flag is already flying in de-occupied Izyum. And it will be so in every Ukrainian city and village,” Zelensky said in a statement on social media.

“We are moving in only one direction – forward and towards victory.”

Kryvyi Rih, the largest city in central Ukraine with an estimated pre-war population of 650,000, was targeted by eight cruise missiles on Wednesday, officials said.

“The water pumping station was destroyed. The river broke through the dam and overflowed its banks. Residential buildings are just a few meters away from the river,” Ukrainian legislator Inna Sovsun said.