The Guardian:Invictus Games: Harry and Meghan pay tribute to Ukrainians

The Duke and Duchess of Sussex said everyone is “standing with” the Ukraine team at the Invictus Games during a speech at the opening ceremony in the Netherlands. 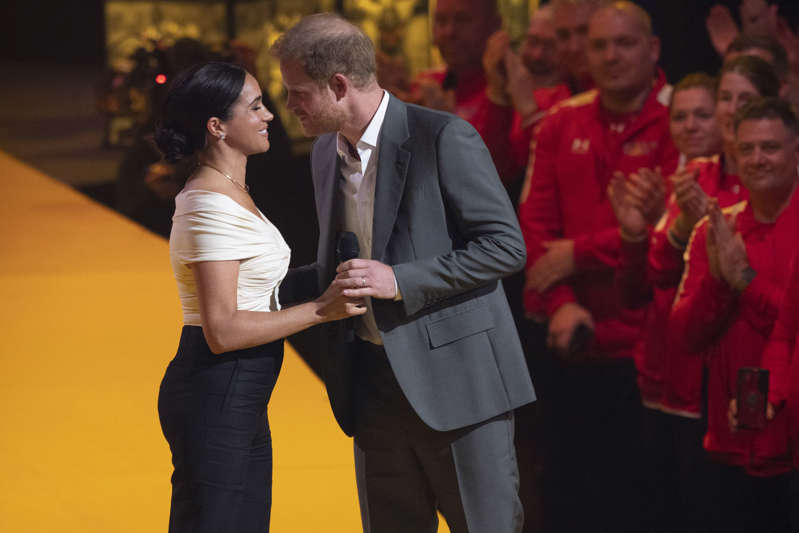 © ASSOCIATED PRESS Prince Harry and Meghan Markle, Duke and Duchess of Sussex, kiss during the opening ceremony of the Invictus Games venue in The Hague, Netherlands, Saturday, April 16, 2022. The week-long games for active servicemen and veterans who are ill, injured or wounded opens Saturday in this Dutch city that calls itself the global center of peace and justice. (AP Photo/Peter Dejong)

The couple addressed the crowd in The Hague, which included members of the Dutch royal family and the Netherlands prime minister Mark Rutte, and paid tribute to the Ukrainian competitors for attending the competition.

The duchess said: “For each team, my husband and I both recognise it’s been a lot to get here, both physically and emotionally. Not least … for the Ukraine team, who we are all standing with.”

The Duke of Sussex also paid tribute to the “bravery” of team Ukraine. He said: “Your bravery in choosing to come, and for being here tonight, cannot be overstated.

“You told me yesterday when you decided to join us despite all odds, you said you came to be on this global stage, not simply to show your strength, but to tell your truth, the truth, of what is happening in your country.

“You know we stand with you. The world is united with you and still you deserve more. And my hope is that these events, this event, creates the opportunity in how we as a global community can better show up for you.”

Prior to the opening ceremony, the duke and duchess joined a junior driving contest where they were driven round a circuit on miniature Land Rovers.

The couple appeared at The Hague’s Zuiderpark after a low-key reunion with the Queen and Prince of Wales in Windsor on Thursday, the duchess’s first trip back to Europe since their exit from formal royal life.

A film crew is accompanying Harry and Meghan at the games as part of the upcoming Netflix documentary Heart of Invictus. It is the first show of their $100m (£76.5m) deal with the streaming firm, and is being produced by Archewell Productions, the royal couple’s recently launched television production company.

The documentary will take a behind-the-scenes look at athletes competing at the Invictus Games, an international sporting event founded by Prince Harry for wounded, injured and sick servicemen and women.

The Invictus Games Ukraine team manager, Oksana Horbach, 39, will appear in the documentary. Horbach, who is in the Ukraine armed forces working with food supply chains in Kyiv, said: “I spoke with Meghan about the importance of having a voice and she totally understood that – be heard, be vocal, have a voice, just tell your own truth, your experience. It’s very important to her.

“And she told me that it is something that they support profoundly, with full heart, to have this platform, Invictus Games platform, for the nations, especially for Ukraine, to be able to have that voice.”

While in the Netherlands, the pair are said to have VVIP status and Dutch police protection. They have cited security concerns as a reason why they were absent from the Duke of Edinburgh’s memorial service in London last month.

Harry is bringing a claim against the Home Office after being told he would no longer be given the same degree of personal protective security when visiting from the US, despite offering to pay for it himself.

The duke wants to bring his children to visit, but he and his family are “unable to return to his home” because it is too dangerous, his legal representative has said.