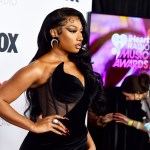 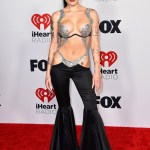 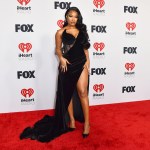 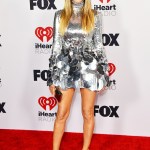 Dare to bare! The ‘I Am Not A Woman, I’m A God’ singer set pulses racing in a Swarovski number which only covered the bare minimum.

Talk about show-stopping! Halsey, 27, knew how to command attention when they arrived at the 9th annual iHeartRadio Music Awards at Los Angeles’ Shrine Auditorium on Tuesday, Mar. 22.

Below the barely-there top, Halsey had on wild, flared pants with evoked flamenco-style flair. Diamond huggies and matching rings added a bit more glitz to the already dazzling look.

Halsey In Sexy Outfits: See Her Hottest Pics Of All-Time 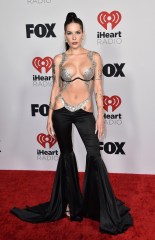 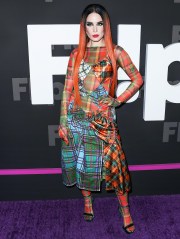 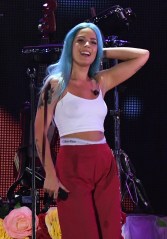 Going bold with their glam, the founder of AboutFace beauty, raked their dark hair back into a high ponytail and played up their eyes with a bit of bright blue shadow. A sharp white manicure and tan lip completed the look.

The talent wasn’t the only one to make an impression on the red carpet. Also attending the event were Megan Thee Stallion, Avril Lavigne, and Dove Cameron. Olivia Rodrigo skipped the red carpet but was seen catching up with Halsey inside as the duo rocked out to Icon Award winner Jennifer Lopez’s performance together.

Halsey’s bold red carpet appearance came after they teased what’s to come with on their next album. Taking to Instagram on Mar. 22, the Manic artist wrote, “Due to personal reasons I will be making a pop album.” They went on, “I have an incredible song that I could put out as a single for radio next but I feel like that’s insane to do bc I haven’t even toured iichliwp [‘If I Can’t Have Love, I Want Power’] yet idk. I actually have a few. Idk what to dooooo.”

Halsey’s last album was significantly darker than her previous ventures. If I Can’t Have Love, I Want Power featured a distinctly industrial influence, produced by none other than Trent Reznor and Atticus Ross of Nine Inch Nails.