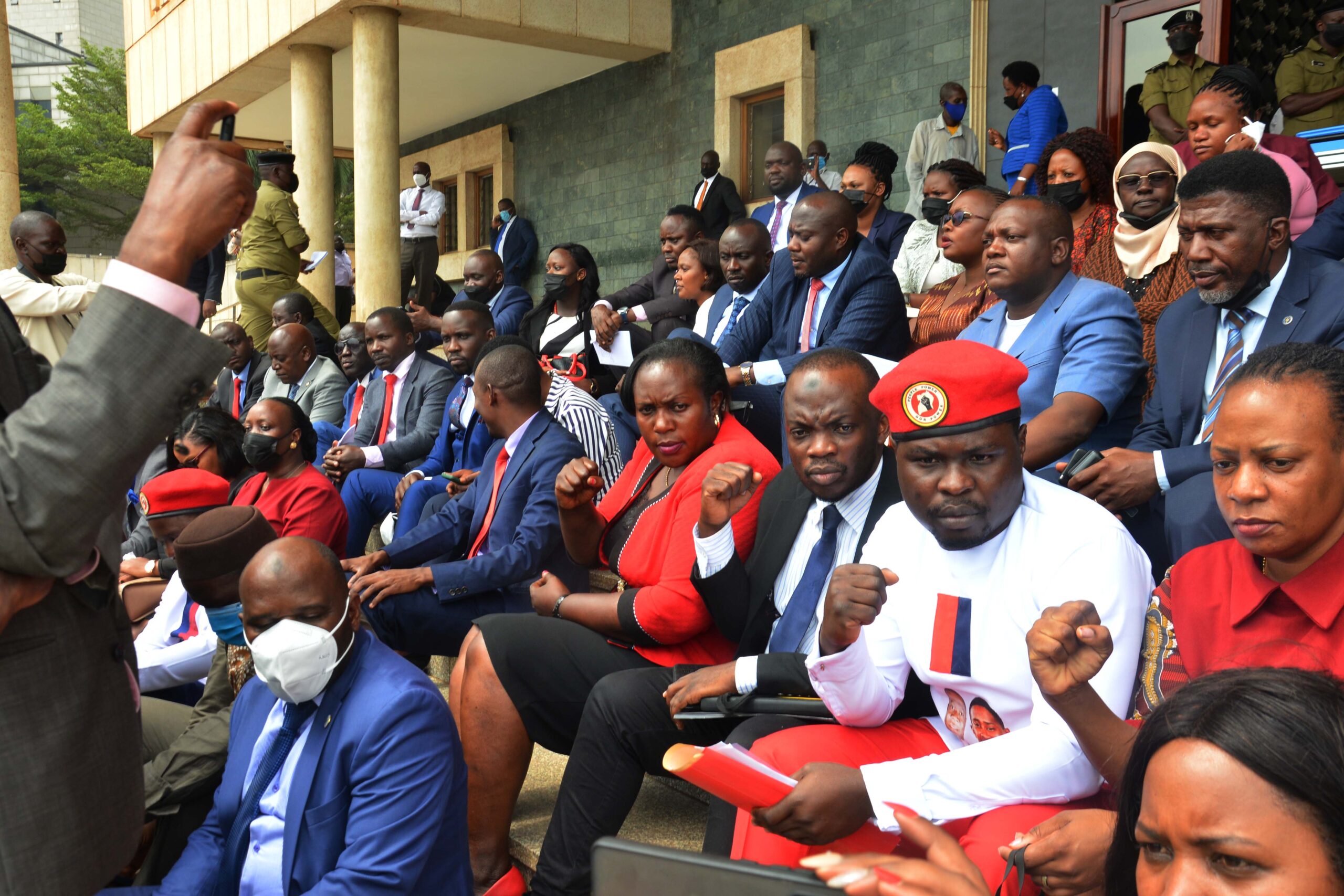 MP Zaake Francis  3rd  from right in a recent Photo where Opposition Mps stormed  out of Parliament  accusing Security Agencies of  increased torture of Ugandans.Photo by Ronald Kabuubi/KMA Updates.

Abdu Katuntu presented a report which recommended that Zaake apologises. Photo by POU. 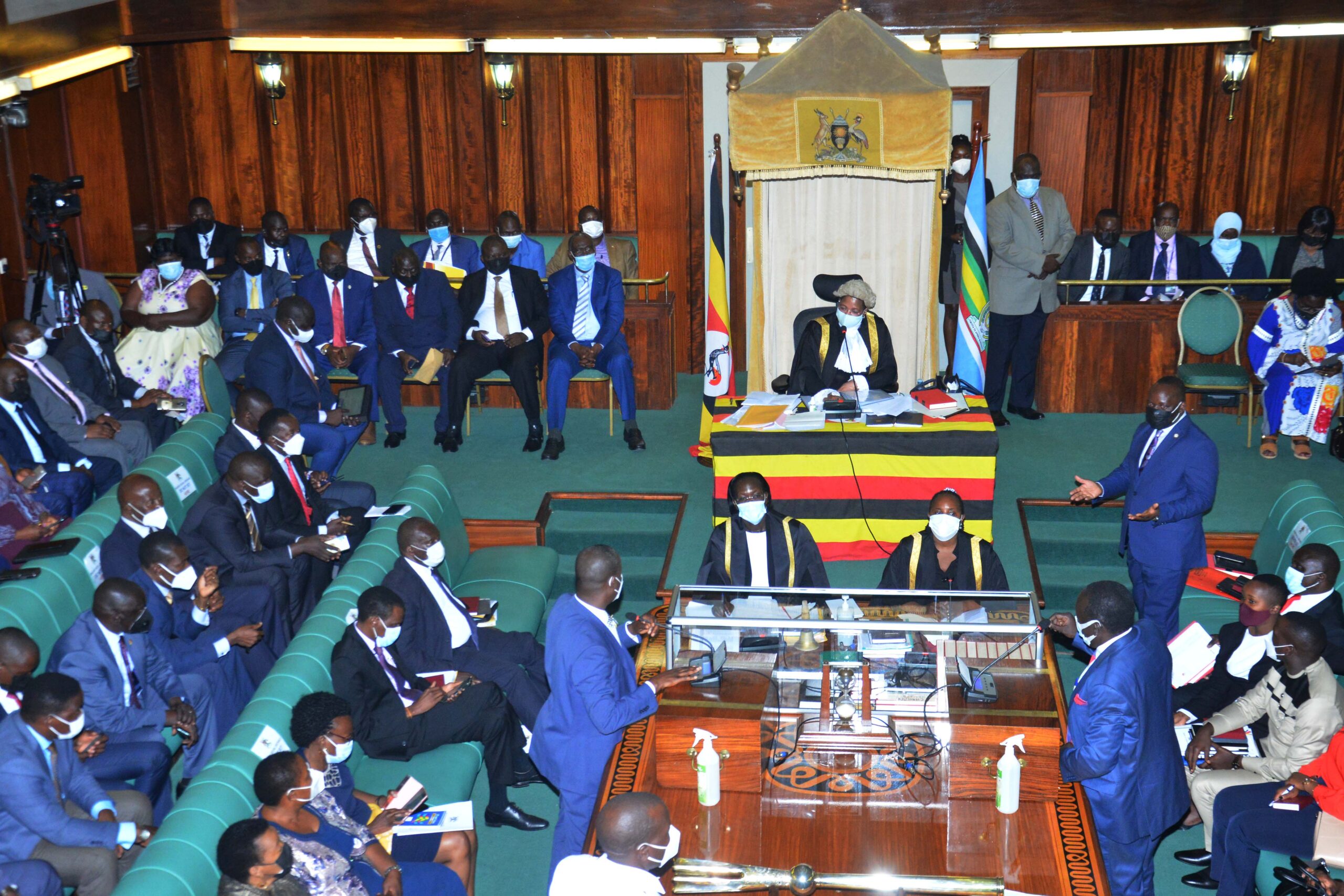 Mityana Municipality Member of Parliament, Hon. Francis Zaake will cease being a Parliamentary Commissioner following a vote on motion moved to have him out on grounds of misconduct.

In a secret ballot conducted out of 161 members of Parliament, 155 MPs voted to remove Zaake from the Parliament Commission while only four MPs voted against the proposal to remove Hon. Zaake. There were two invalid votes registered.
Hon. Zaake’s removal comes after Parliament also adopted the report of the Committee of Rules, Discipline and Privileges with amendments presented by Chairperson, Hon. Abdu Katuntu.

The vote followed debate of the report of the committee that found Zaake in breach of public trust and confidence. Zaake was probed for statements he made on social disparaging the Deputy Speaker, Anita Among.

During plenary sessions to honour Parliament and staff who had participated in the East African Legislative Assembly Games in Arusha, Tanzania the Deputy Speaker said although Zaake was reportedly tortured and had a broken leg, he brought back a gold medal for Parliament. This prompted Zaake to go on social media where he authored the statements for which he was found guilty.

In his report, Abdu Katuntu said that Zaake did not protect the integrity of Parliament but instead his conduct brought the entire Parliament and its leadership into disrepute.

Katuntu said that the statement with undermined the dignity and integrity of the Office of the Speaker.

He added that Zaake’s statements lowered the esteem of the institution of Parliament in the eyes of the citizens who ought to look up to their Leaders.
“Following an evaluation of the submissions and evidence, the committee observes that Hon. Zaake did not take steps as provided in the Rules of Procedure to challenge the words of the Presiding Officer which allegedly led him to post the impugned social media posts. This is clearly so upon examining his statements made to the committee,” he said in his report.

Hon. Aisha Kabanda, the Butambala Woman MP who presented the minority report recommended reconciliation between the parties involved in the matter for smooth running of Parliament and avoidance of unnecessary tension.

Hon Asha Kabanda presented the minority report and called for reconciliation.Photo by POU.

Rukiga County representative, Hon. Ronald Ndyomugyenyi moved an amendment to the majority report to remove Zaake from the Parliamentary Commission saying he had been found guilty of breach of his privilege and also depicted misconduct and general misbehavior.

Ndyomugyenyi moved an amendment to the recommendations to have Zaake removed.Photo by POU.

The Leader of the Opposition, Hon. Mathias Mpuuga proposed that the House handles the report of the committee without the amendment, in vain.

The Minister of Agriculture, Hon. Frank Tumwebaze sought to find out if the implicated Member of Parliament had apologised to the Speaker. 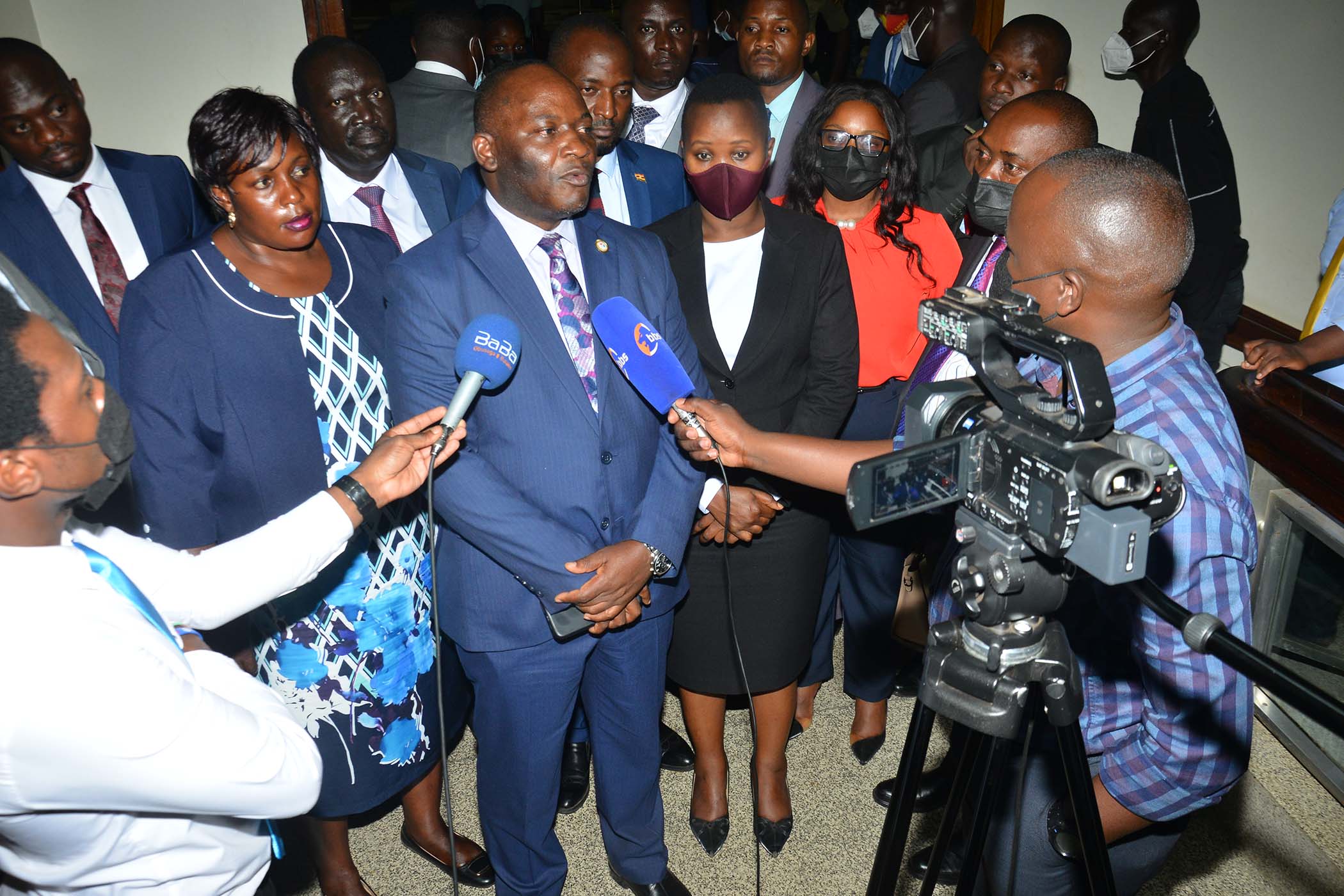 The leader Of Opposition Mathias Mpuuga talks to the Press after his team  protested and walked out  during the  debate.Photo by Ronald Kabuubi/KMA Updates. 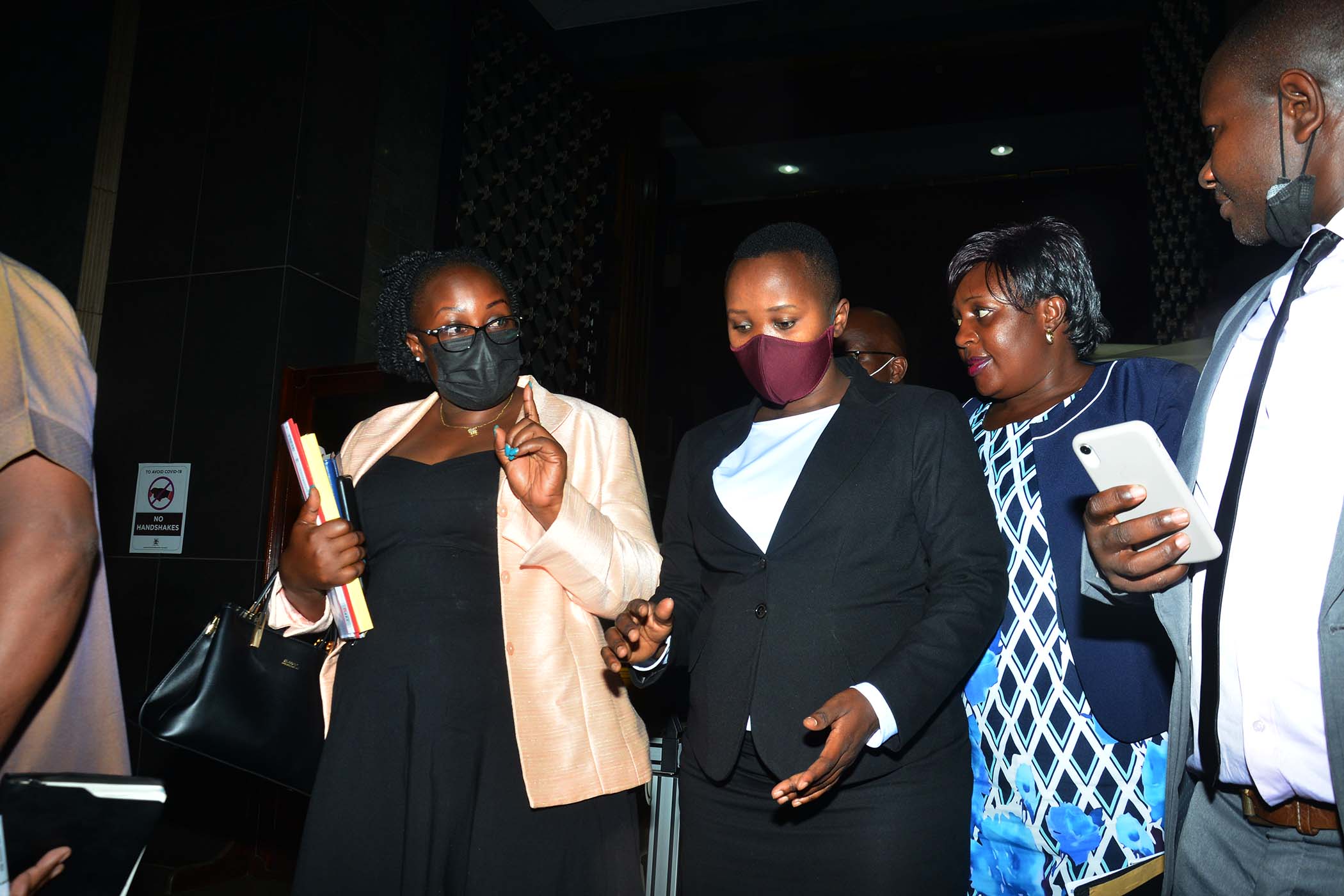 Shamim Malende.Joyce Bagala and others  after walking out in protest  of the debate.Photo by Ronald Kabuubi/KMA Updates. 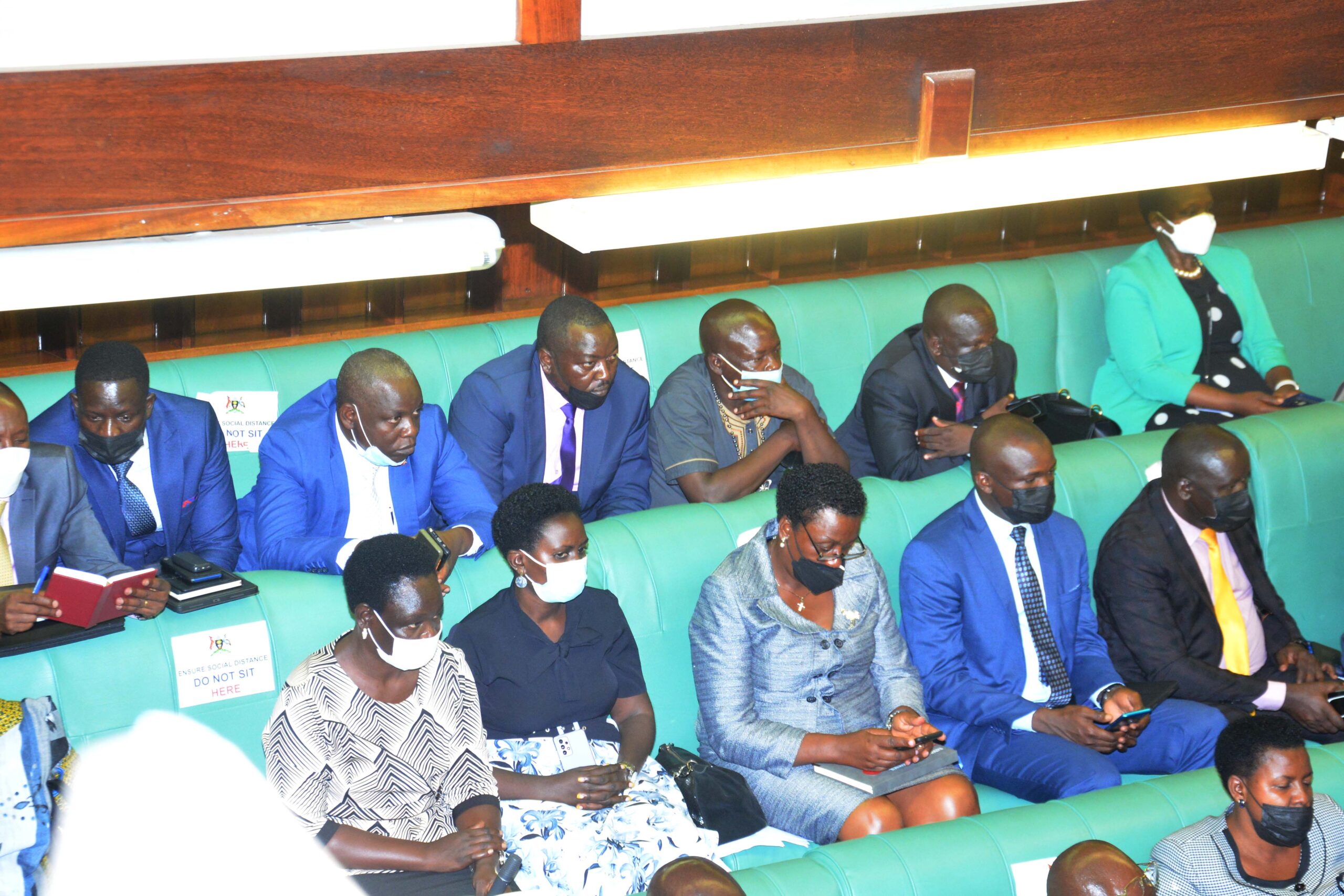 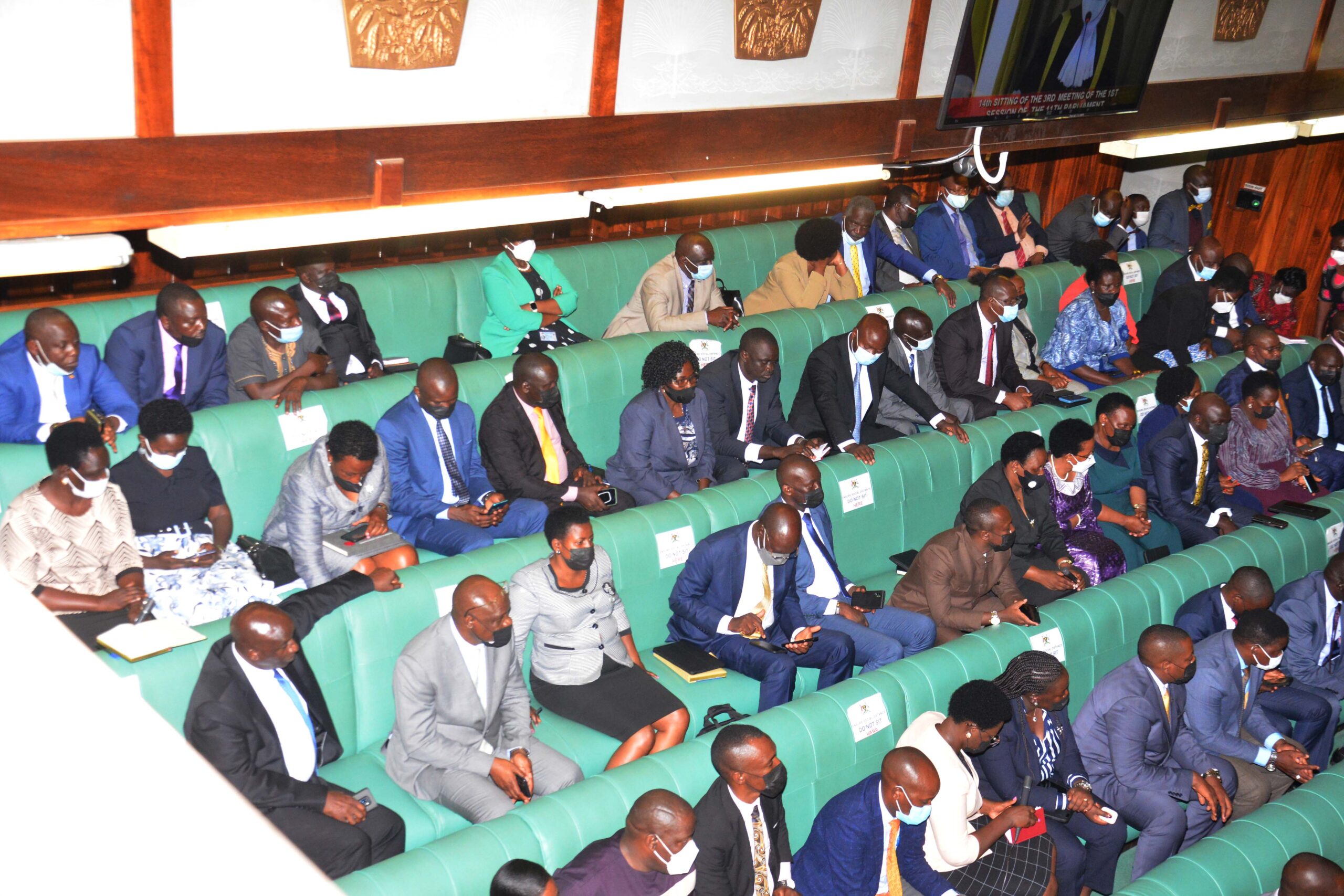 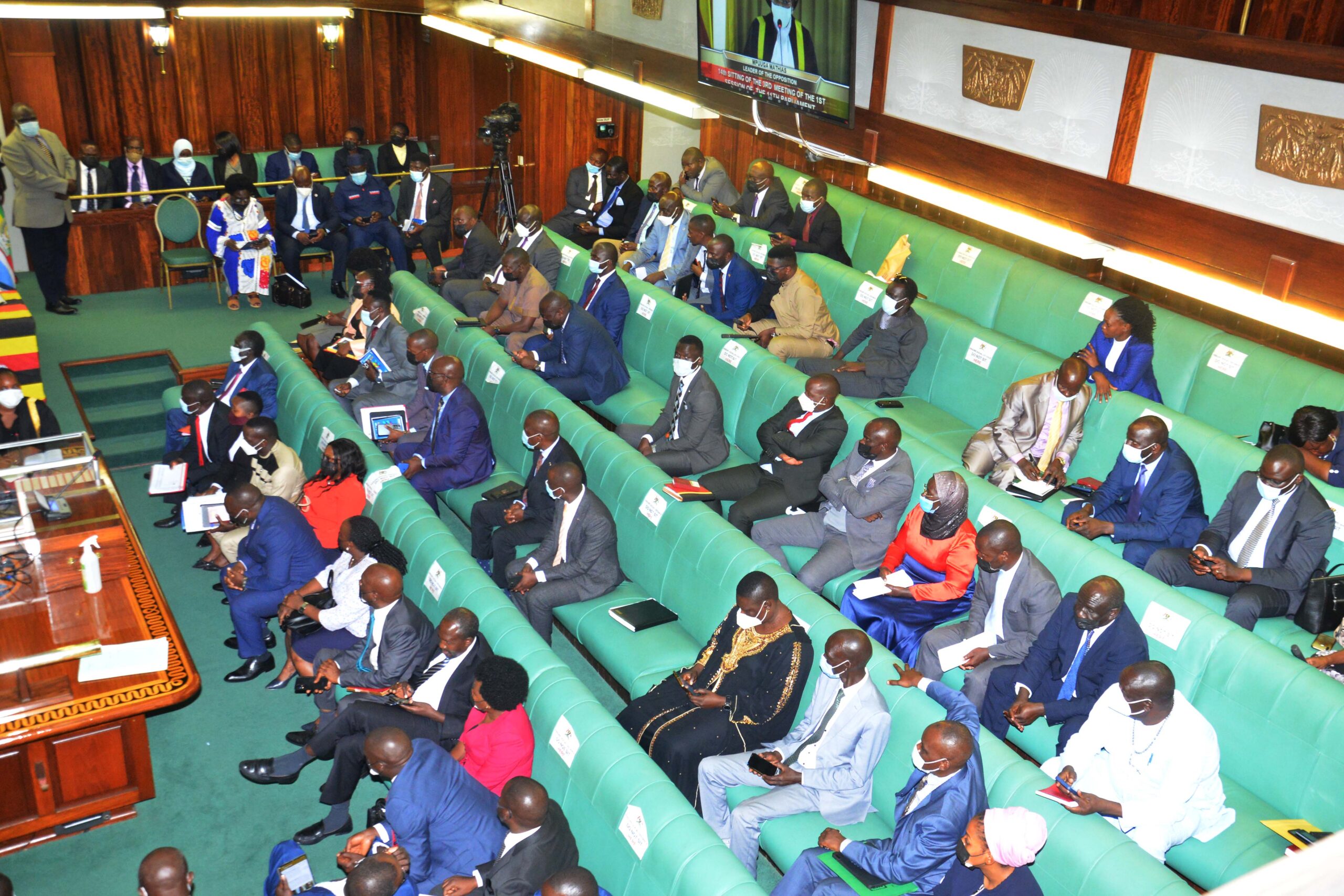 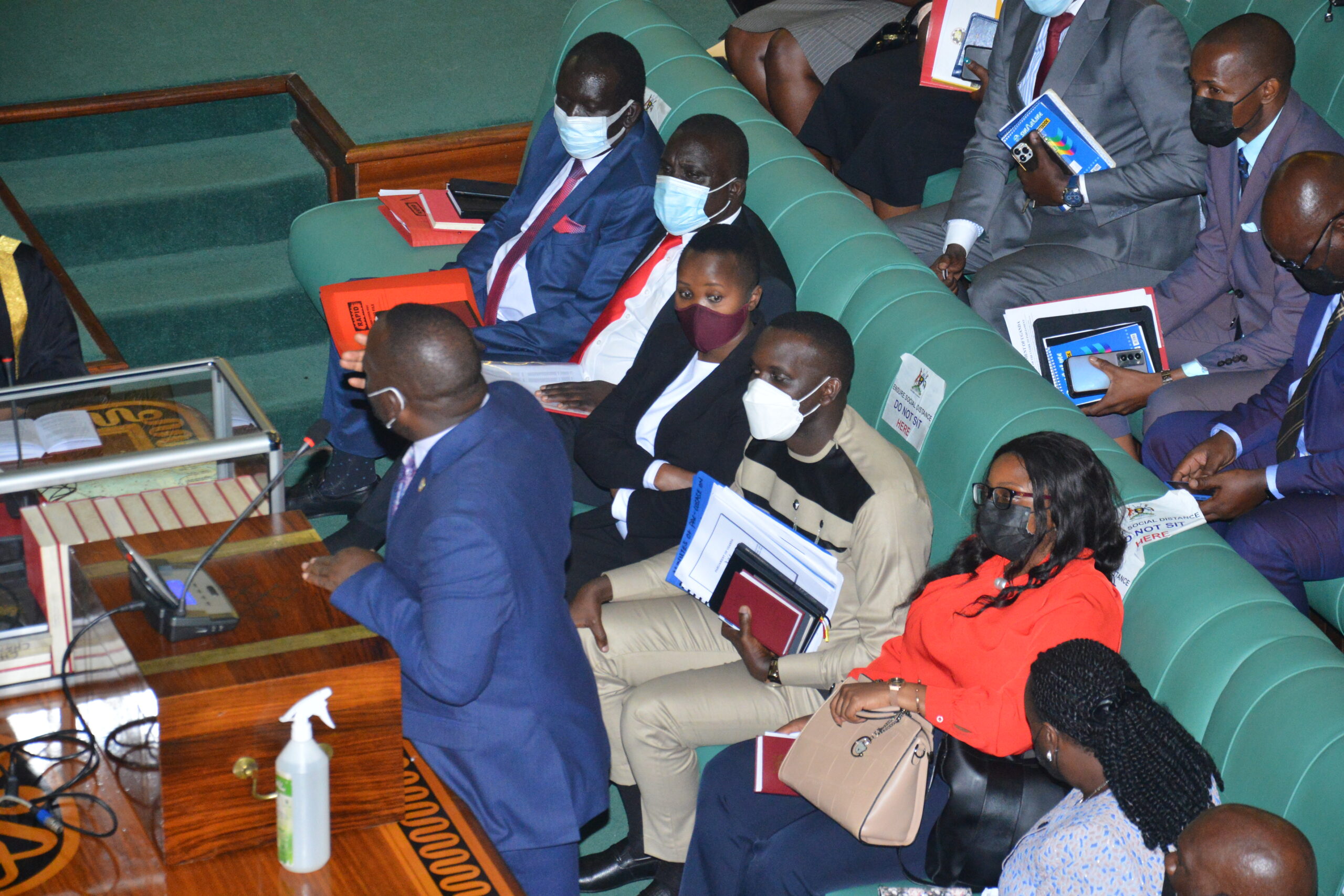 House in Session: Leader of Opposition Mathias Mpuuga submits  as his team of Members of Opposition look on.Photo by Ronald Kabuubi/KMA Updates. 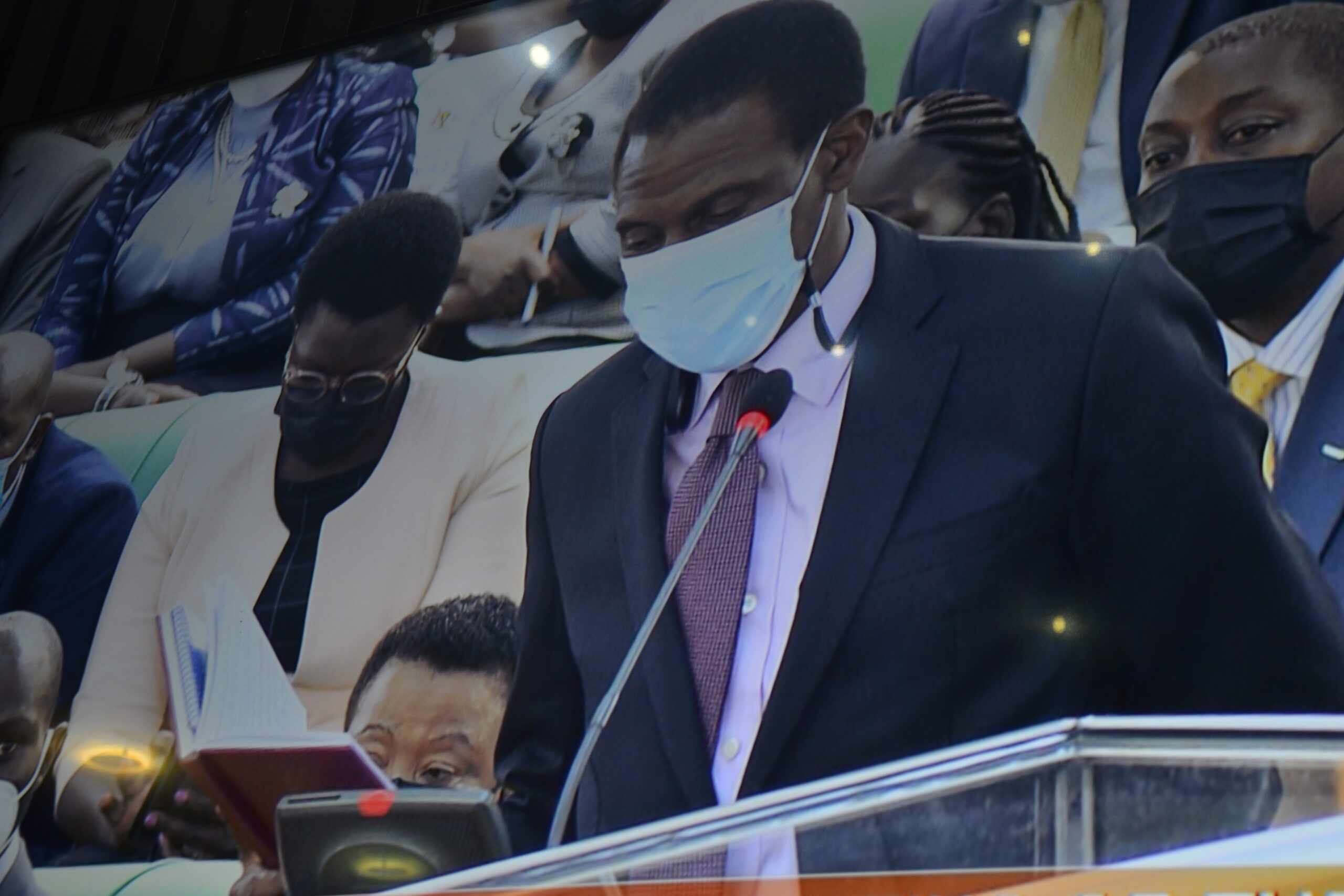 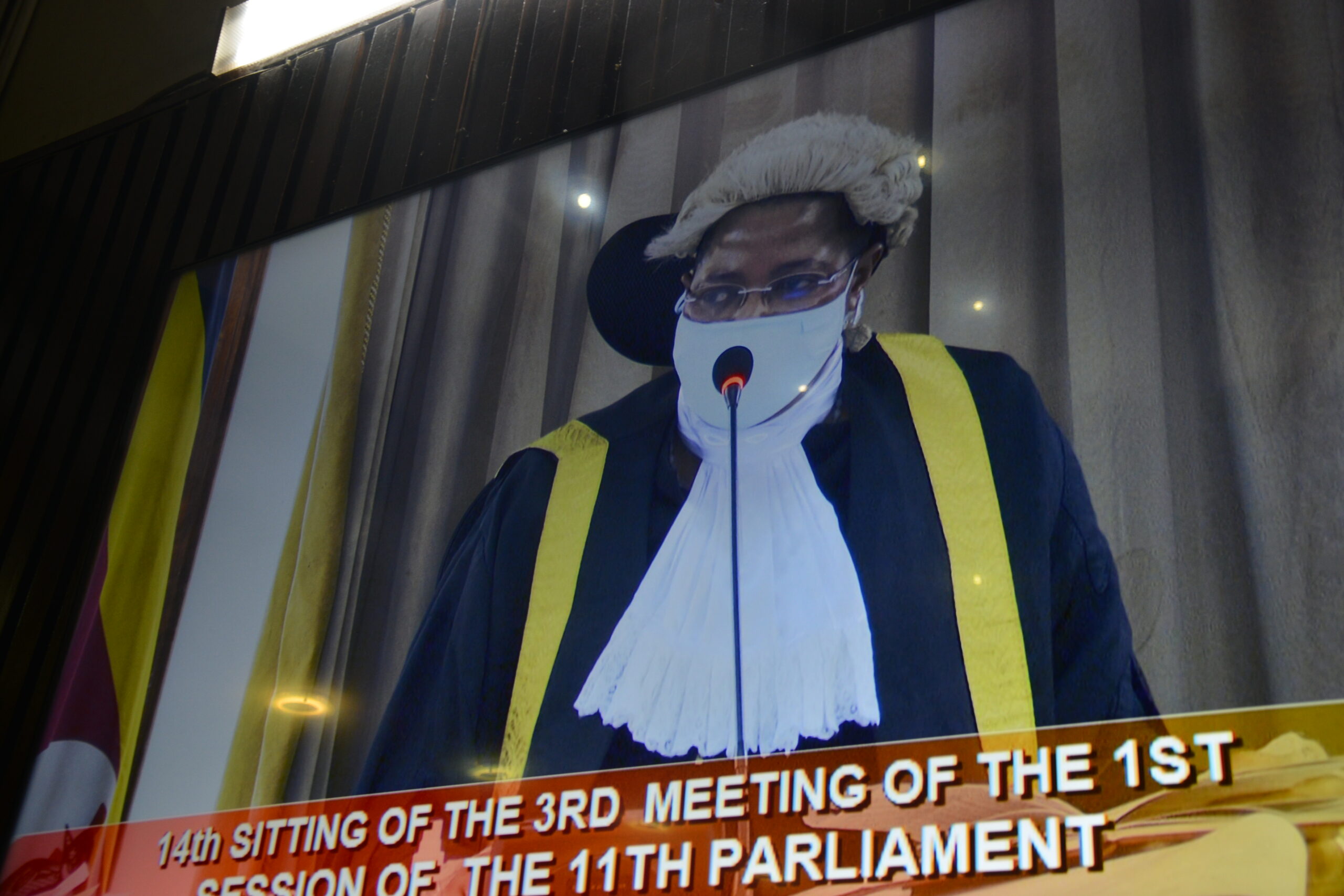 In this file image,Opposition Members Of Parliament  protest against increased torture by Security Agencies to Ugandans recently.

Fort Portal Central Division MP, Hon. Alex Ruhunda also moved a motion to suspend rules for the purpose of allowing the processing of the Ndyomugyenyi motion.
Mpuuga tried in vain to contest the move to suspend the rules calling it an illegality.

Bardege-Layibi Division MP, Hon. Martin Ojara Mapenduzi moved a motion under section 5 of the Administration of Parliament Act to immediately remove Zaake from the Commission. Busia Municipality MP, Hon. Geoffrey Macho seconded the motion saying the removal of Zaake as a commissioner would bring sanity. He says that the removal of Zaake is not because of his political party but of his character.

The Deputy Speaker said Zaake would apologise to the House within one week adding that the Opposition will have to propose another name for the position.

Voting was by secret ballot.Photo by POU.