‘Leave no stone unturned’: how investigators gather evidence of war crimes in Ukraine

Ukrainians fleeing the scenes of destruction and carnage in Ukraine are already being interviewed by investigators in anticipation of a future war crimes trial of Vladimir Putin, along with his top officials and generals.

With well over a million refugees crossing the border, there is an abundance of eyewitness testimony, while the flow of video footage through social media has provided an unprecedented amount of evidence which is being subjected to forensic analysis.

However, the sheer quantity of evidence is not necessarily a guarantee of a successful trial, and experienced war crimes investigators warn there is a long war to go before Putin and his regime are in the dock, in person or in absentia. 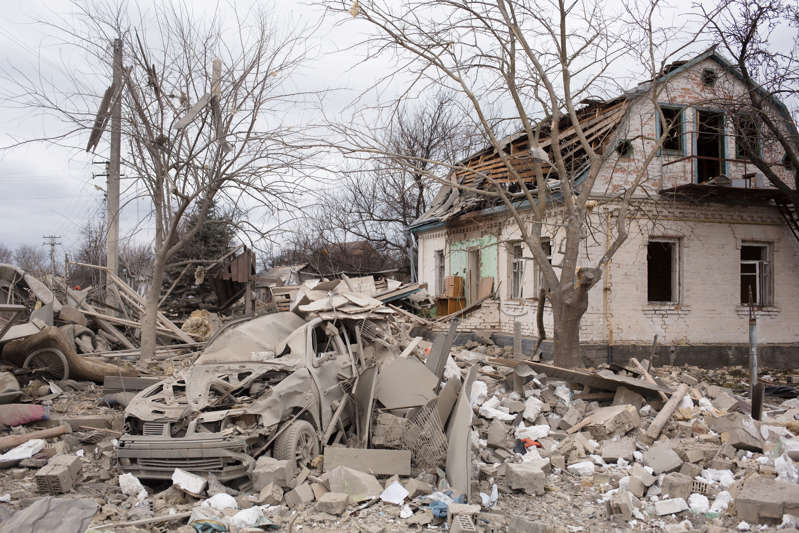 © Photo by Anastasia Vlasova/Getty Images MARKHALIVKA, UKRAINE – MARCH 05: A view of the residential houses which were destroyed by shelling on March 5, 2022 in Markhalivka, Ukraine. Regional police said six people died, including a child, and four were wounded in a Russian air strike on this village southwest of Kyiv. Russia continues assault on Ukraine’s major cities a week after launching a large-scale invasion of the country.

Multiple investigations have been launched at the same time, and it is not clear to what extent they are coordinated, if at all.

The prosecutor of the international criminal court (ICC) in The Hague has opened an investigation, after a petition by an unprecedented 39 member states, and will almost certainly receive the most governmental support.

For example London’s Metropolitan police’s war crimes team has said it will gather evidence from any UK sources. The UN Human Rights Council has established a commission of inquiry, the Organisation for Security and Cooperation in Europe has set up an expert mission. Meanwhile, several governments are helping the Ukrainian judicial system directly in the collection and safeguarding of evidence of atrocities committed on its territory.

The first organisation to start work was the Pilecki Institute, a Polish thinktank studying the nature and impact of totalitarian regimes. It has set up the Raphael Lemkin Centre for the Documentation of Russian Crimes in Ukraine, named after the Polish Jewish lawyer who coined the word “genocide” and drafted the Genocide Convention.

It has already deployed researchers to start interviews in the hotels and community centres in Poland hosting refugees, and is recruiting more Ukrainian speakers.

“The scale of tragedy among civilians will be unbelievable, so every testimony is important, every detail is important,” said Magdalena Gawin, the institute’s director. She added that the centre is also in touch with Ukrainians from inside the country, sending information from the frontlines.

Bill Wiley, a Canadian ex-soldier who worked on both the Yugoslavia and Rwanda tribunals, cautions that the testimony from refugees who have crossed the border recently may have limited use in future war crimes trials.

Wiley now runs the Commission for International Justice and Accountability (CIJA) which has gathered documentary evidence of war crimes in Syria. The archives CIJA amassed helped lead to a life sentence imposed by a German court in January on a former Syrian colonel, Anwar Raslan, for crimes against humanity.

“It’s extremely difficult to build these cases because you don’t know what the attacking force is trying to hit,” Wiley said. “When you’re in a war of movement, it is very, very difficult, because the violence is constantly moving. International humanitarian law makes tremendous allowance – more than people realise – for incidental, or what the media calls collateral damage.”

Wiley predicts the worst, most obvious, war crimes are likely to come if Russian forces manage to subdue and occupy Ukrainian cities.

© Provided by The Guardian Captured Russian soldiers in Kyiv, Ukraine. Experts say it is difficult to link atrocities up the chain of command, but Putin is ‘leaving lots of footprints’. Photograph: Efrem Lukatsky/AP

In previous war crimes cases, it has often been more straightforward to prove who committed an atrocity than to convict the chain of command that ordered it to be carried out.

“The crime base evidence is always the easier part,” said Clint Williamson, a former US ambassador-at-large for war crimes issues. “Linking it back to particular military units, linking it up the chain of command, is always the more challenging part of it.”

David Scheffer, an American lawyer who was first US war crimes envoy, predicted that such challenges could be less daunting in the case of Ukraine, that in other conflicts.

“Command responsibility is difficult to prosecute, but in this case I would expect it to be easier to prove in a courtroom as this is a superpower military with a definite chain of command and an obviously autocratic leader, Putin, who is leaving lots of footprints,” Scheffer said.

Once the evidence is gathered, the question will arise of which court should try the cases. The first two decades of the ICC’s existence have been difficult because the US, Russia and China have refused to join. Under the Trump administration, the US even sanctioned ICC prosecutors in an effort to stop investigations of the conflicts in Afghanistan and the occupied Palestinian territories.

In the case of Ukraine however, the US has offered to supply information to the court. Ukraine has given the ICC jurisdiction to investigate on its territory, so the prosecutor, Karim Khan, can begin to build cases for war crimes, crimes against humanity and genocide.

However, because Ukraine is not a party to the court (its parliament never ratified its membership), and because a Russian veto will stop it ever being referred by the UN security council, the ICC cannot address the crime of aggression. Philippe Sands, a law professor and director of the Centre on international courts and tribunals at University College London, said that is a “big gap” when it comes to accountability for Ukraine.

The crime of aggression, Sands said at a Chatham House discussion last week, “is the only crime which allows those responsible for the totality of the terrible events we are now witnessing to be held to account, to be judged.”

With the support of Ukraine’s foreign minister, Dmytro Kuleba, former UK prime minister, Gordon Brown, among legal experts from around the world, Sands is seeking to persuade governments to fill the vacuum by setting up a special international criminal tribunal to try Putin and his regime for the overarching crime of waging an illegal war.

“If we’re committed to standing up for what is, in my view, a naked lawless act of aggression, we must leave no stone unturned,” he said.