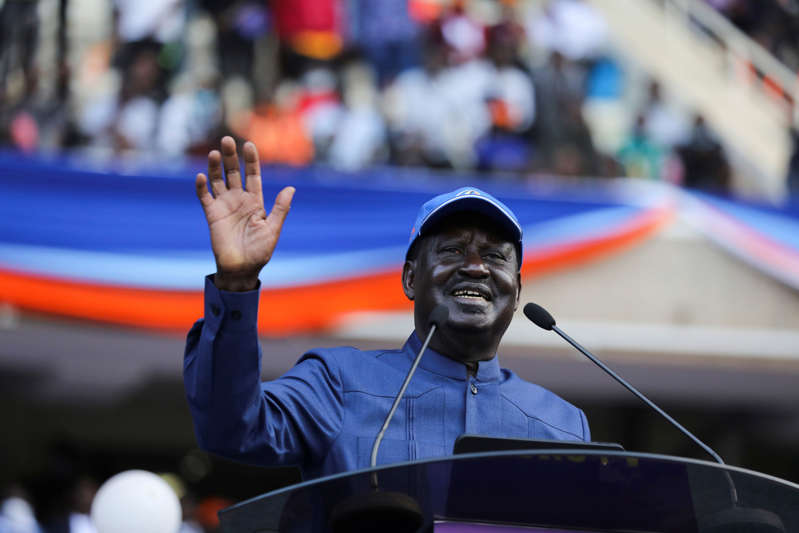 © Thomson Reuters FILE -Kenya’s Opposition leader Raila Odinga delivers his speech during the Azimio la Umoja (Declaration of Unity) rally to unveil his August 2022 Presidential race candidature at the Moi International Sports centre in Kasarani, Nairobi, Kenya December 10, 2021. REUTERS/Baz RatnerThe zones are strongholds in blue, battlegrounds (green) and weak or vulnerable (red), with distinct strategies to be employed in each.The strongholds are regions that Mr Odinga has traditionally enjoyed a lot of support, including Nyanza, Western and Coast. Central, Eastern, North Eastern and Nairobi are categorised as battlegrounds.

They are subdivided into two—fair and real. Fair battlegrounds include Garissa, Wajir, Mandera, Marsabit, Isiolo and Samburu counties. Real battlegrounds are mainly counties in Mt Kenya, parts of Eastern and some regions in the Rift Valley such as Turkana, West Pokot, Narok and Kajiado.

Mr Odinga’s campaign board, made public last week, has already begun working. Its chairman is Laikipia Governor Ndiritu Muriithi while Ms Elizabeth Meyo is the secretary and chief executive.

Daily Nation has been informed that the board met in Naivasha last week and was to hold another meeting at the Odinga campaign secretariat offices in Lavington, Nairobi, on Monday.

“We are finalising our campaign strategies and manifesto. Jakom (Mr Odinga) will chair an ODM National Executive Committee (NEC) meeting on Thursday in which we will brief him on the latest developments,” a member of the board told the Daily Nation.

He added that strongholds, battlegrounds and weak zones have been mapped out, “only that we cannot share much on this”.

“We’re in a battlefield and you cannot show the enemy your strategies,” he said.

The source added that a lot of energy would be put into battleground regions, with the first major rally in Thika, Kiambu county, on January 15.“We want to ensure Raila visits every constituency in Mt Kenya before the election,” an MP allied to the ODM chief said.

The zoning, planners say, will also help identify popular parties under the Azimio la Umoja banner and reach the best decisions on how to field candidates.

The board is also discussing the possibility of crafting a strong team of leaders akin to the ODM Pentagon of 2007.“It should consist of regional kingpins,” a source familiar with the plans said.

Mr Musyoka is a principal of the One Kenya Alliance that projects itself as the force to counter Mr Odinga and Deputy President William Ruto’s influence.

Reached for comment, Governor Muriithi was guarded about the zoning, though he insisted that Mr Odinga’s campaigns would reach all parts of Kenya.“The country is yearning for Azimio la Umoja,” he said.

Kakamega Governor Wycliffe Oparanya said Mr Odinga’s team wants to secure every region.“We have a team that can move around the country even when our captain is not holding any event.

There are quality people on our side to do that,” Governor Oparanya said.Like the rest, ODM Secretary-General Edwin Sifuna said Azimio campaigns will be taken to every corner of the country.“It’s what we’re calling Azimio Mashinani for rural areas and Azimio Mtaani for towns. We want to take this message of unity to constituencies and wards,” Mr Sifuna said.

“For strongholds, the plan is to shore up the number of registered voters. We continue to encourage people to take advantage of the mass voter registration that kicks off on January 17. This will be followed by a get-the-vote-out campaign in August.”

Nominated MP Maina Kamanda said the Azimio teams intend to secure Mr Odinga’s strongholds in Western, Coast and Nyanza and step up campaigns in the battlegrounds.

“Raila normally gets two to three per cent of the Mt Kenya vote. He will be home and dry if he secures 30 to 50 per cent,” Mr Kamanda said.jjochieng@ke.nationmedia.com