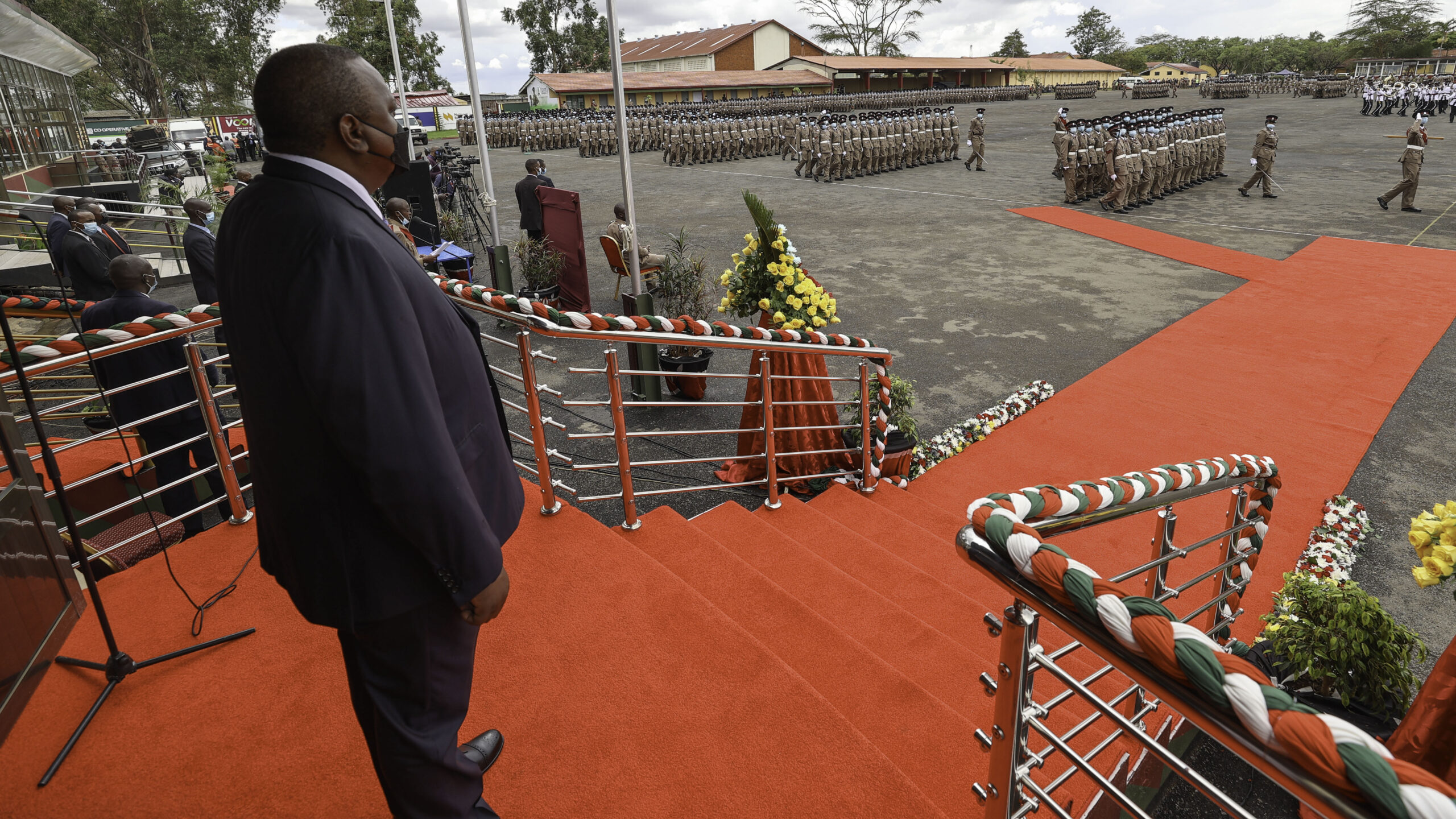 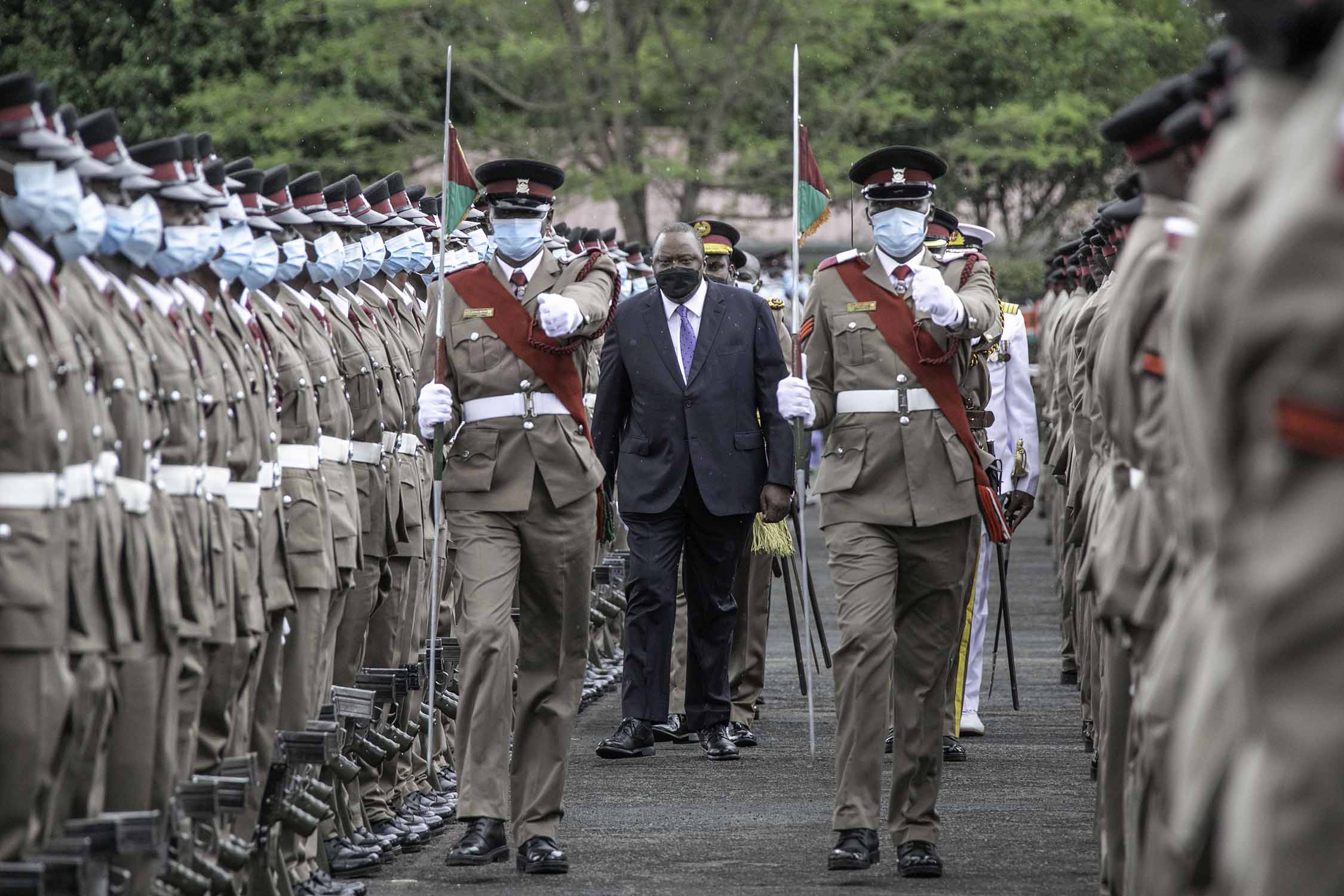 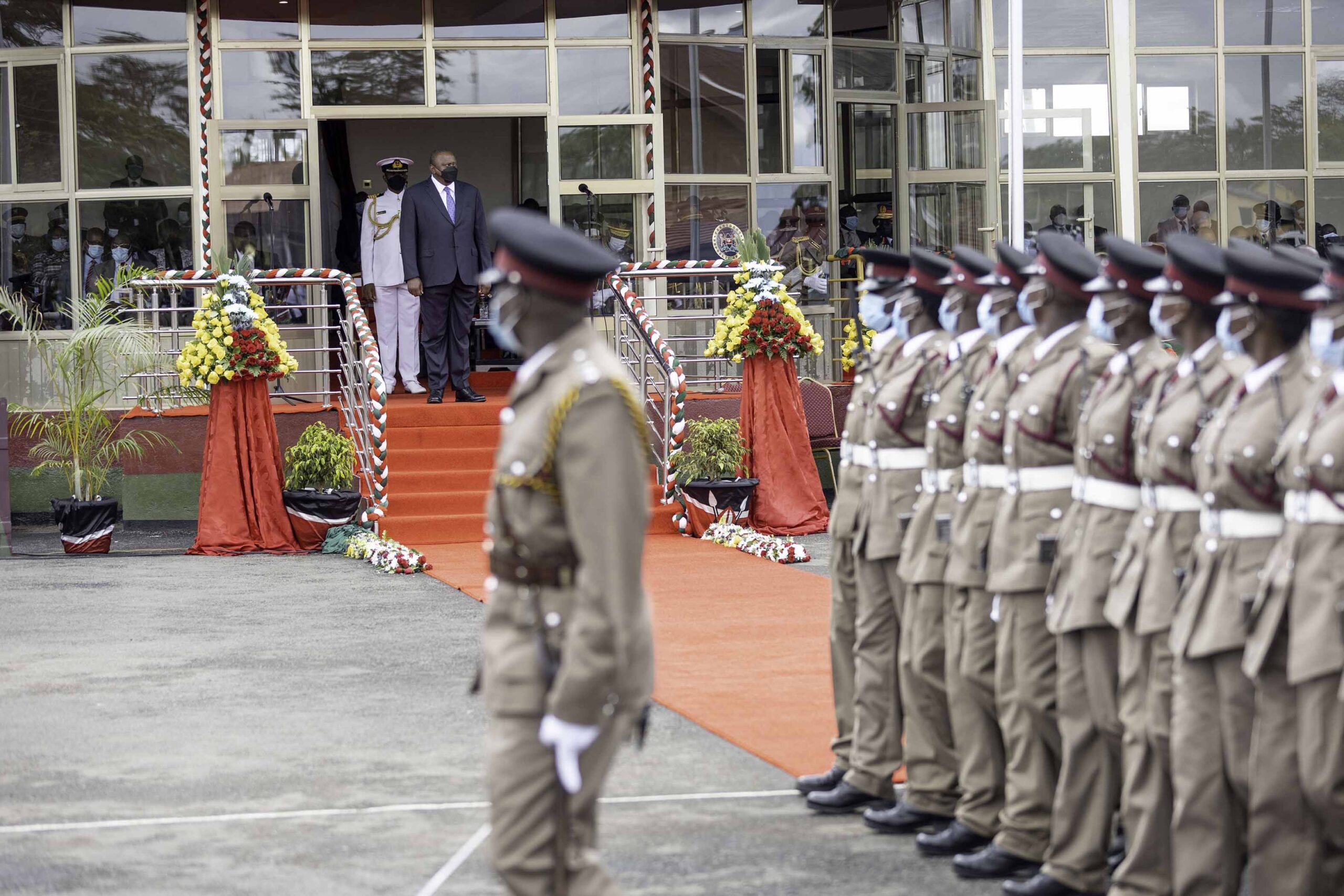 President Uhuru Kenyatta looks on as the parade marches past in slow and quick time during the 57th Passing-out Parade of Administration Police Service Recruits at the National Police College Embakasi A Campus in Embakasi, Nairobi County. 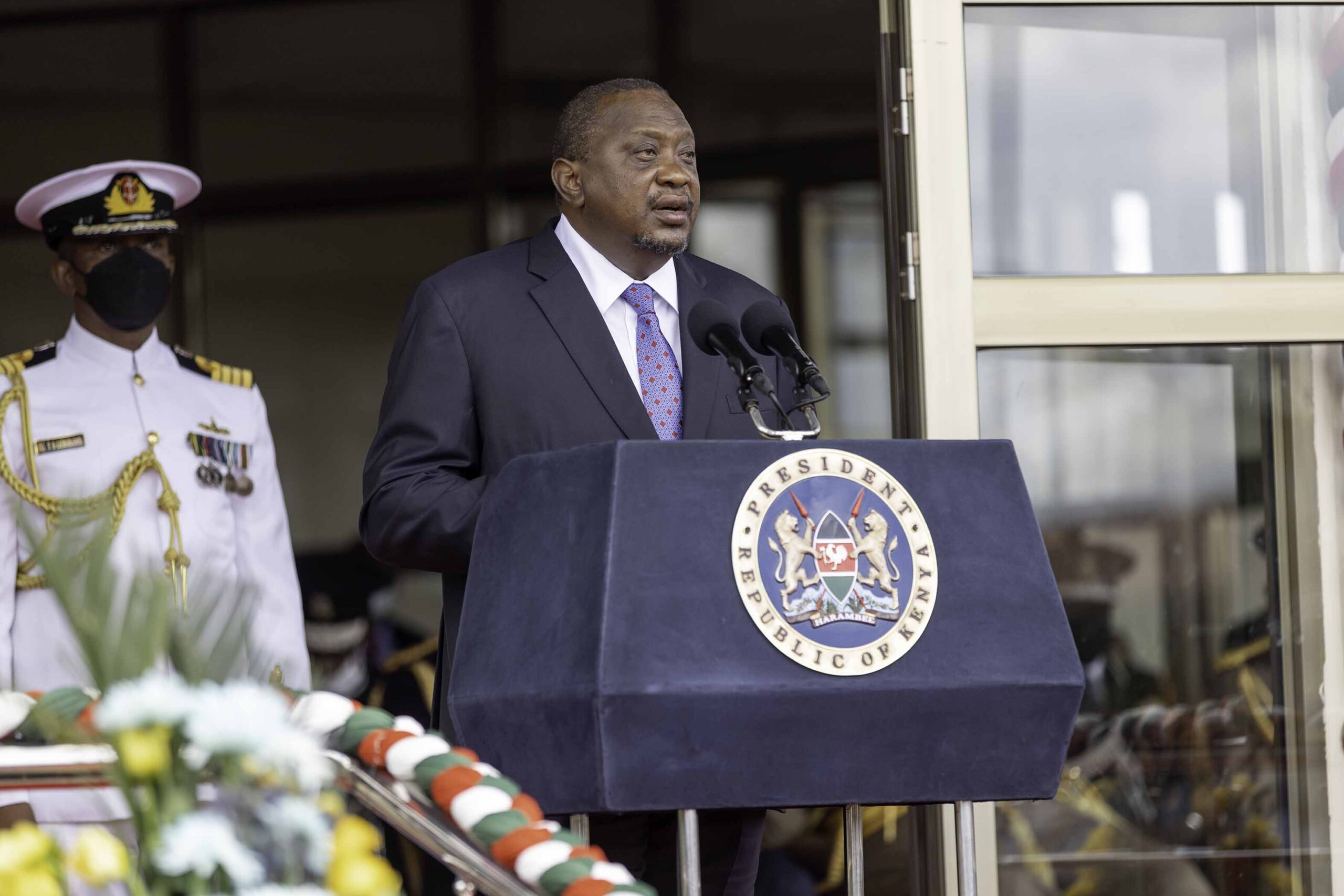 NAIROBI, 29th November 2021, (PSCU)—President Uhuru Kenyatta has commended security sector agencies led by the National Police Service (NPS) for playing a leading role in the containment of the spread of Coronavirus in the country over the last two years.

Despite the enforcement of public health measures not being at the core of NPS’s regular operations, the President said heroic acts by police officers supported by sacrifices made by Kenya’s gallant health workers helped forestall a national catastrophe.

“Over the last two years, the whole world has walked through the valley of the shadow of death as we combated the Coronavirus pandemic.

“However, the firmness of our resolve as a nation helped to contain the surge of infections within our borders. In keeping the invisible enemy at bay, I thank the law enforcement agencies for the role they have played in enforcing the Covid-19 regulations and protocols,” President Kenyatta said.

The Head of State spoke Monday afternoon when he presided over the 57th passing out parade of 2,619 new administration Police officers at their Embakasi A Campus in Embakasi, Nairobi County.

He said the seamless manner in which the NPS adapted to the new demands imposed by Covid-19 is a reminder of the fluid nature of the contemporary law enforcement environment, and urged the new officers to continuously improve their competencies.

“You will be required on occasions to operate in new and challenging operating theatres, and to address dynamic situations that call for new skills and approaches,” President Kenyatta told the new officers that included 2,215 men and 395 women graduates respectively.

Once again, the President reiterated the Government’s commitment to continue with the ongoing NPS reforms noting that since 2013, over 45,000 new police officers had joined the service significantly boosting the entity’s human resource capacity.

Besides growing police numbers, the Head of State said the Government continues to allocate adequate finances, improve staff welfare, build officers capacity in technical and specialized areas as well as expand housing and healthcare provision as part of the comprehensive reforms.

At the same time, President Kenyatta cautioned the new officers against engaging in corruption and other workplace vices, and assured them that the Government’s would shield them from unjust condemnation.

“The Government is committed to continue to uphold the dignity of police officers. So long as you do what is right and in accordance with the law, devoid of corruption and other ills, rest assured that you will be protected from any form of undue harassment or vilification,” he said.

Interior Cabinet Secretary Dr Fred Matiang’i, who also spoke at the colourful ceremony, thanked the President for the Government’s continued investment in the ongoing overhaul of the security sector saying the resourcing had transformed Kenya’s security institutions to be among the best in the region.

Inspector General of Police Hilary Mutyambai and Deputy Inspector of Police incharge of Administration Police Service Noor Gabow also spoke at the event where, as part of the passing out tradition, the President awarded outstanding graduands.