Ghana fans have mocked Luis Suarez by singing a pro-South Korea song immediately after his Uruguay side crashed out of the World Cup on Friday evening.

The Sky Blue were cruising into the last 16 after storming into a two-goal lead against Ghana thanks to Giorgian De Arrascaeta’s brace, with Portugal also beating South Korea which was enough to see Uruguay go through.

However, Korea staged a dramatic comeback as Kim Young-gwon equalised, before Hwang Hee-chan scored in the 92nd minute, meaning the Warriors leapfrogged Uruguay into second place on goals scored.

Uruguay had a matter of minutes to net another goal, but they were unable to beat Lawrence Ati-Zigi for a third time in the game as the Sky Blue were left frustrated in Doha. The results meant Portugal and South Korea qualified for the knockout stages, with Uruguay in third and Ghana rock bottom despite beating Korea on Monday.

To make matters worse, Ghana supporters were chanting “Korea, Korea, Korea” when pictures showed a heartbroken Suarez on the big screen. The former Barcelona star was in tears and couldn’t hold back his emotions as Uruguay were put on the brink of elimination.

Suarez then appeared to storm out of his seat on the bench and onto the touchline, similar to Cristiano Ronaldo in 2016, to fire instructions to his teammates as the score filtered through. Upon the final whistle, Suarez stormed onto the pitch to surround the referee after Uruguay were denied two penalties in the second-half.

Darwin Nunez was brought down by Daniel Amartey in the 57th minute but replays showed the Leicester man got a slight touch on the ball, before Edinson Cavani went tumbling in the box. But the referee ignored both claims, with VAR also agreeing with the on-pitch official – to the distress of the Uruguay players and staff.

There was some added spice heading into the fixture after Suarez’s infamous handball into 2010, which helped Uruguay progress into the semi-finals of the World Cup in South Africa. With the scores level, Dominic Adiyiah’s header was flying towards the back of the net in the 120th minute before Suarez stepped in and handled the ball, preventing Ghana from winning the game. 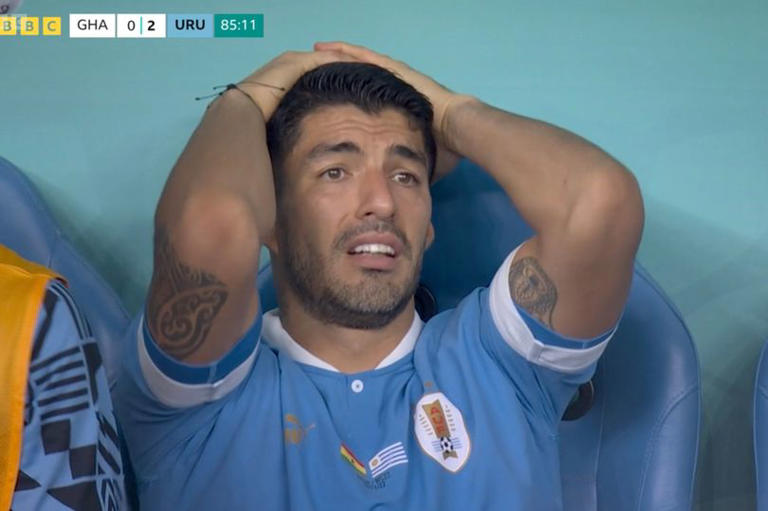 Luis Suarez’s Uruguay crashed out of the World Cup© BBC

Suarez was giving his marching orders and was praying that Fernardo Muslera would spare his blushers as Asamoah Gyan stepped up from the spot. But the former Sunderland forward squandered the chance to give Ghana the win as the game went straight to penalties – and you know the rest. Uruguay went onto win the shootout 5-3 and secure their passage into the last four against the Netherlands.

A Suarez-less Uruguay couldn’t reach the final as they fell to an agonising 3-2 defeat against the Dutch, with Cavani being partnered up front by Diego Forlan. Suarez returned for the third place play-off, although the ex-Barcelona hero couldn’t find the net as Germany ran out 3-2 winners in South Africa.