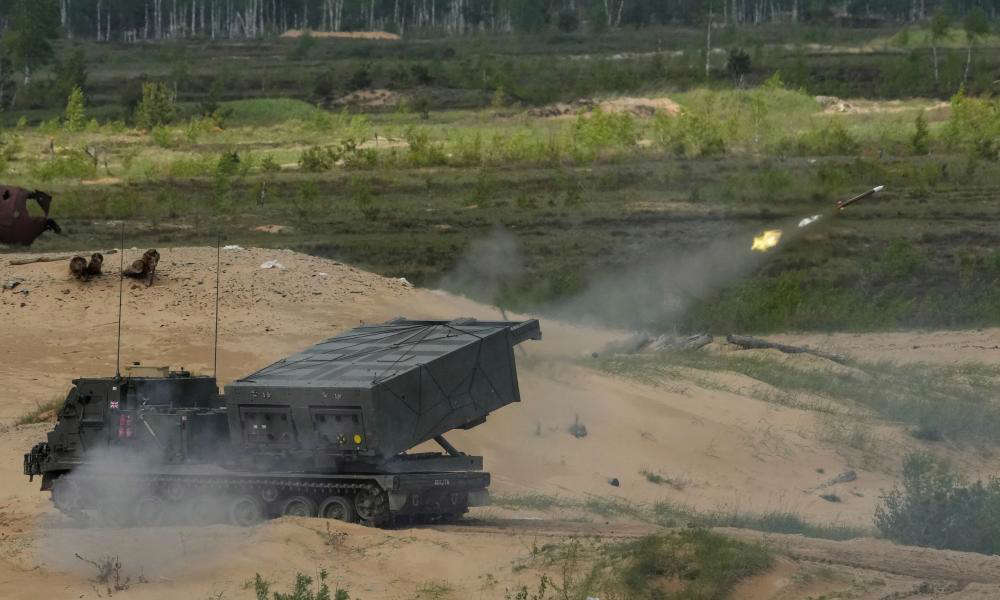 Britain is to supply long-range rocket artillery to Ukraine, despite a threat on Sunday from Russia’s president, Vladimir Putin, to bomb fresh targets if similar weapons from the US were delivered to Kyiv.

The UK will send a handful of tracked M270 multiple launch rocket systems, which can hit targets up to 50 miles away, in the hope they can disrupt the concentrated Russian artillery that has been pounding cities in eastern Ukraine.

Ben Wallace, the UK defence secretary, argued the decision to ship the rocket launchers was justified because “as Russia’s tactics change, so must our support to Ukraine”. The move risks further provoking an already irritated Kremlin.

Before the British announcement, Putin told Rossiya state television that Russia would retaliate further if the US went through with the delivery of Himars rocket artillery that the White House promised last week.

“We will strike at those targets which we have not yet been hitting,” said the Russian leader, who has been closely involved with operational military decisions throughout the three months-plus of the war. He did not specify what those targets were.

It was the first time anywhere in the capital has been hit for over five weeks. One person was hospitalised, and a plume of smoke rose and was visible from high points in the capital.

Five cruise missiles were launched from Tu-95 bombers, one of which was intercepted, Ukraine’s air force said, in an attack that represented a change of approach on the part of Russian forces. Kyiv was last hit on 28 April.

Russia’s ministry of defence claimed it was targeting an arsenal of T-72 tanks that had been delivered from eastern European countries, suggesting it now wants to target the supply of western arms. But Ukrainian officials said the statement was false.

Oleksandr Kamyshin, the chairman of the board of Ukrainian Railways, said: “There are no such tanks at the plant, as well as no military equipment. There are only cars that we repair. These carriages we need for export – these are, in particular, grain carriages.”

The UK, in conjunction with the US and other western nations, began the war by promising only to supply “defensive weaponry” to help Ukraine repel the Russian invasion. But as Russia has made gains in the east and the south of the country, western countries have gradually sent more lethal arms.

London said it had been cooperating closely with Washington. The British announcement comes a few days after the US said it would send four similar truck-mounted Himars systems. The US and UK systems are intended to be complementary. The ranges of both are far greater than any land weapons Ukraine currently has.

Britain did not say how many M270s it was sending, although the number is small and will be comparable to the US decision to send four Himars. Ukrainian troops will be trained on how to use the launchers in the UK, the MoD added, and Kyiv’s forces will be supplied with the appropriate rockets “at scale”.

However, Putin said he believed the west’s goal was to prolong the war in Ukraine, which has now gone on for over three months, after the Russian president launched an unprovoked invasion on 24 February.

“All this fuss around additional deliveries of weapons, in my opinion, has only one goal: to drag out the armed conflict as much as possible,” Putin added.

Ukraine’s nuclear energy company, Energoatom, also warned on Sunday that a Russian cruise missile had come dangerously close to the Pivdennoukrainsk nuclear power plant, in the south of the country, at about 5.30am, apparently heading for Kyiv.

It said the missile “flew critically low” over the site and that Russian forces “still do not understand that even the smallest fragment of a missile that can hit a working power unit can cause a nuclear catastrophe and radiation leak”.

Elsewhere, Britain’s Ministry of Defence said that Ukrainian forces had counterattacked in Sievierodonetsk in eastern Ukraine, “likely blunting the operational momentum Russian forces previously gained” but offered no assessment of whether the effort was pushing the invaders back.

On Saturday, Serhiy Haidai, the Ukrainian governor of Luhansk province, said his country’s forces had regained about 20% of the city in Donbas, which had been under days of attack from concentrated Russian shelling and airstrikes.

Haidai repeated that claim on Sunday, adding that eight Russians had been taken prisoner and that the occupiers had “lost a huge number of personnel”. A humanitarian headquarters in neighbouring Lysychansk had been struck with 30 shells overnight, the governor said.

Ukrainian forces were “successfully slowing down Russian operations” in Donbas and were making “effective local counterattacks in Sievierodonetsk”, said the Institute for the Study of War, a US thinktank, overnight.

The research group, which closely monitors the fighting, said that Russia “may still be able to capture Sievierodonetsk and Lysychansk” and that it appeared that “Ukrainian defences remain strong in this pivotal theatre”.

Britain’s Ministry of Defence said Russia was relying on “poorly equipped and trained” separatist forces from Luhansk to conduct the clearance of the city, a tactic it said had been previously employed by Moscow’s forces in Syria. “This approach likely indicates a desire to limit casualties suffered by regular Russian forces,” it added.

One Ukrainian presidential adviser urged European nations to respond with “more sanctions, more weapons” to the strike on Kyiv – and appeared to criticise the French president, Emmanuel Macron, who had said in an interview on Friday that Russia must not be humiliated in Ukraine so that a diplomatic solution could eventually be found.

Mykhailo Podolyak, an adviser to the head of the president’s office, tweeted: “While someone asks not to humiliate Russia, the Kremlin resorts to new insidious attacks. Today’s missile strikes at Kyiv have only one goal – kill as many Ukrainians as possible.”