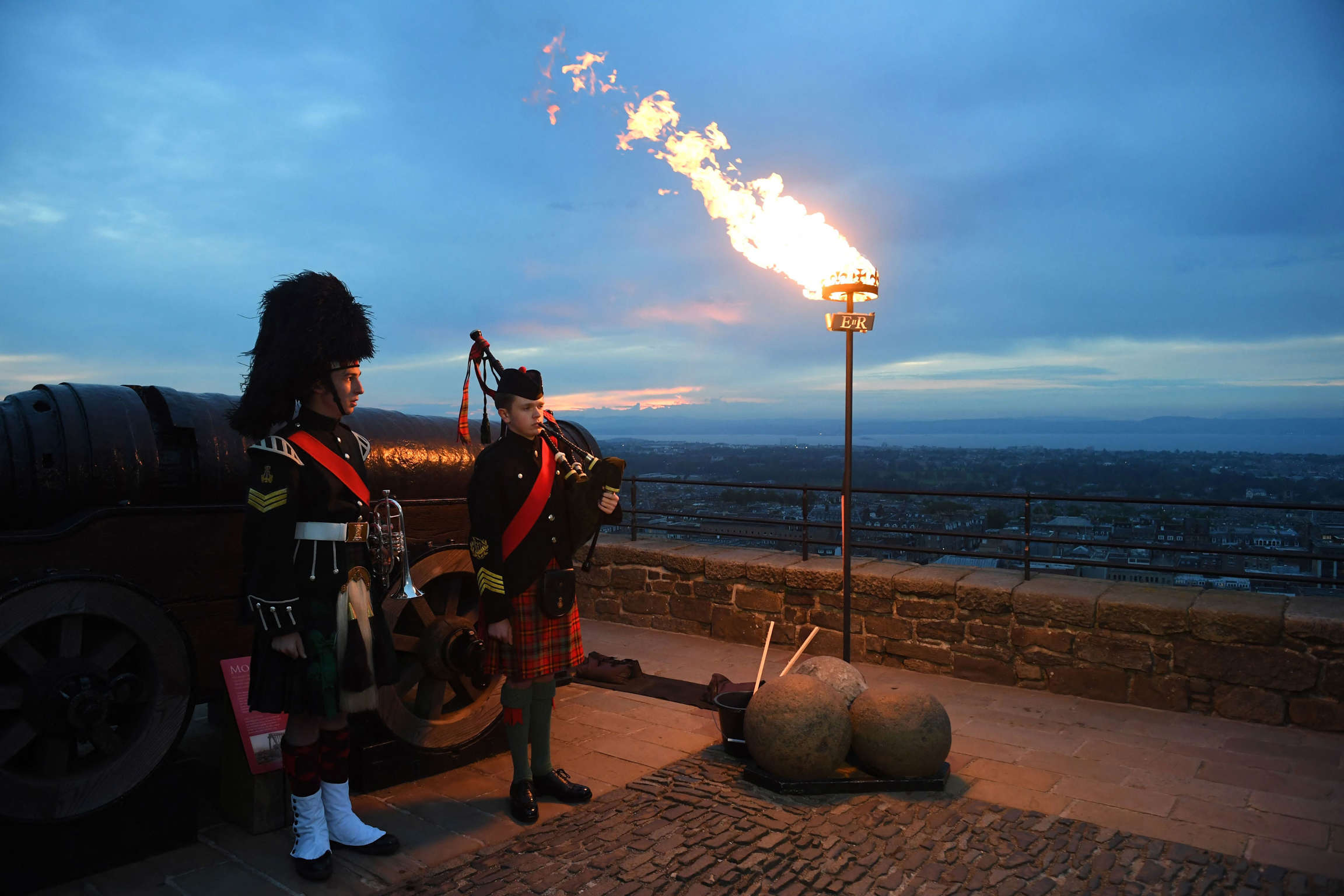 Adelighted Queen led the lighting of the principal Platinum Jubilee beacon on Thursday evening in a spectacular end to the first day of celebrations.

The monarch’s late-night appearance at Windsor Castle capped a busy day of festivities which saw the Queen take to the Buckingham Palace balcony surrounded by her family.

Meanwhile, the Duke of Cambridge was at Buckingham Palace on Thursday night to play his part in the dual ceremony, lighting another beacon in London.

But it was announced that the Queen would not attend a National Service of Thanksgiving at St Paul’s Cathedral in London on Friday after experiencing “discomfort” during Thursday’s events.

The principal beacon is the 69ft tall Tree of Trees sculpture, featuring 350 British-grown trees, which towers over the palace. It was created by British designer Thomas Heatherwick and reflects the planting of more than a million jubilee trees as part of the Queen’s Green Canopy (QGC) initiative.

Pageant master Bruno Peake, who organised the beacons marking the Queen’s diamond and platinum jubilees, said more than 3,500 beacons would be lit around the globe, something the Queen commented on.

After speaking to the monarch he added: “She said, ‘More beacons, every time you do it you have more beacons’ – which is great.

Beacons were lit at sites including the Tower of London, Windsor Great Park, Hillsborough Castle, the Queen’s estates of Sandringham and Balmoral. Beacons were also lit at towns and cities across Northern Ireland including at Titanic Belfast and St Columb’s Cathedral in Londonderry, while in Scotland, a beacon was lit at Edinburgh Castle as a piper played a tune written for the occasion.

Earlier in the day, the Queen took centre stage at her historic Platinum Jubilee celebrations as she greeted crowds from the Buckingham Palace balcony, surrounded by her family.

Huge cheers erupted from the thousands of well-wishers packed onto The Mall in central London as the monarch emerged for the special flypast after Trooping the Colour.

Wearing sunglasses, the 96-year-old sovereign looked joyful as she surveyed the patriotic scenes, giving broad smiles as she enjoyed the aircraft display.

It was the second of two appearances from the monarch on the balcony on Thursday – the start of the special extended Jubilee weekend marking her 70-year-reign.

Earlier, she joined her cousin the Duke of Kent on the famous frontage to take a salute of her soldiers returning from Trooping the Colour, after the Prince of Wales deputised for her on the parade ground. 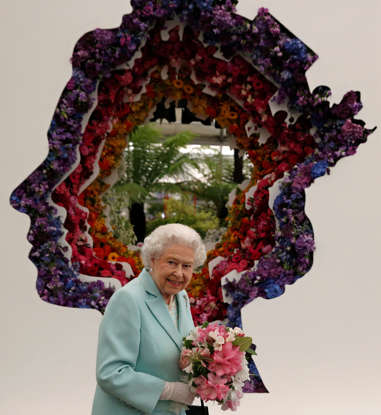 The Queen has attended Chelsea Flower Show 2022, arriving at the event held on the grounds at Royal Hospital Chelsea at 5.35pm. She was taken on a tour of 10 gardens in a buggy, with Buckingham Palace confirming that ‘adjustments have been made for the Queen’s comfort’.

The world-famous gardening event, this year sponsored by The Newt in Somerset, returns with its usual spring show for the first time since the pandemic, opening to the public from 24th-28th May 2022.

The 96-year-old monarch, who is Patron of the Royal Horticultural Society, has been experiencing mobility issues and skipped several official engagements as of late, including the State Opening of Parliament, but recently attended the Royal Windsor Horse Show.

Arriving at Chelsea, the Queen was taken The Queen has been a regular visitor to the garden show with her parents as a child, and has attended more than 50 times during her 70-year reign.

The Queen and other members of the Royal Family usually tour the gardens and floral displays on Press Day before the show officially opens. Taking place on Monday 23rd May this year, it’s a day reserved for celebrities, other VIPs and members of the media. For the 2022 show, other royals expected to attend include Prince Edward, Sophie Wessex, Princess Beatrice, the Duke and Duchess of Gloucester, the Duke of Kent, Prince and Princess Michael of Kent and Princess Alexandra.

With the Queen’s Platinum Jubilee this year, it is a particularly special occasion. The RHS will honour the Queen with tributes featuring several decorative floral and plant displays to reflect her long-standing support for the charity, as well as her love of flowers and gardens.

Her Majesty became Royal Patron of the RHS in 1952 following the death of her father, carrying on the dynastic association with the RHS which had begun in Victorian times. She performed the role alongside HM Queen Elizabeth, The Queen Mother, who was Patron of the RHS for 65 years until her death in 2002.

Eighteen royals including the Queen stepped out to watch the high-profile flypast, with the Prince of Wales, the Duchess of Cornwall, the Duke and Duchess of Cambridge and their three children Prince George, Princess Charlotte and Prince Louis flanking the monarch. The Queen leaned over to chat animatedly with her four-year-old great-grandson Louis, who at one stage covered his ears, and reacted with his mouth wide open and eyes tightly shut as the aircraft thundered overhead.

He was also spotted resting his chin on his hand and waving towards the sky.

The six-minute flypast of more than 70 aircraft, including Apache helicopters, Typhoons and The Red Arrows, flew over the Palace.

Fifteen RAF Typhoons paid a special tribute to the monarch’s record-breaking reign, flying in the formation of the number 70, prompting smiles from the Queen. Dressed in a dusky dove blue Angela Kelly coat which she wore for her official Jubilee portrait, and matching hat, the Queen was holding a walking stick and wearing the Guards’ Badge on her coat.

The Duke and Duchess of Sussex were among the guests who earlier watched Trooping the Colour at Horse Guards from inside the Duke of Wellington’s former office, overlooking the parade ground.

They joined a host of more than 30 royals including Camilla and Kate and the Queen’s extended family including all of her grandchildren. It is believed to be the first time Kate and Meghan have met in person since the Sussexes left in 2020 for a new life in America.

The crowds were earlier treated to the sight of George, Charlotte and Louis with proud parent Kate and their step-grandmother Camilla in a carriage procession.

As the spectators waved at the young royals the trio waved back in their first major public outing for a Jubilee and first carriage procession.

The monarch, who has mobility issues, deputised her usual role to future king, the Prince of Wales, who inspected the Guardsmen in their scarlet tunics and bearskins and acknowledging their salute.

But she passed a watchful eye over the servicemen, with the Duke of Kent by her side, on the balcony after their return from their display of procession marching. The nation is embracing the special extended bank holiday weekend of pomp, pageantry and star-studded festivities, which will see celebrities and the public gather in their millions in tribute to the monarch.

Thousands of wellwishers draped in Union flags, party hats and plastic tiaras flocked to London for the spectacle.

The Queen limited those on the balcony for the flypast to working members of her family, her Cambridge great-grandchildren and two youngest grandchildren – a move she took after “careful consideration” the Palace said.

It meant there was no place for the Sussexes, who caused a royal crisis by quitting as senior royals, nor her disgraced second son the Duke of York.