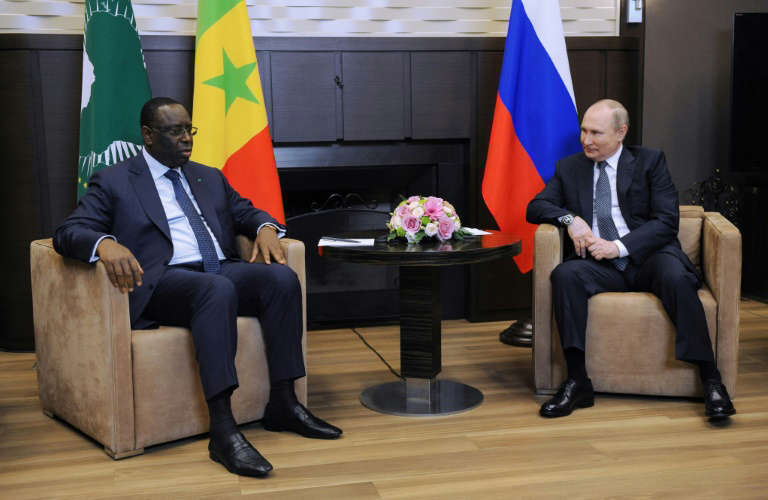 On Friday, Senegalese President and African Union Chair Macky Sall strode into a meeting and shook a smiling Vladimir Putin’s hand before taking a seat next to him to discuss the war in Ukraine.

In a notable reversal of typical roles, Sall led an African delegation to Russia to hold talks with the Russian president over the European war.

The apparently cosy scene — which took place in the southwestern city Sochi on the 100th day of Russia’s invasion of Ukraine — marked a significant step forward in Sall’s efforts to boost Africa’s global political standing.

“A large part of humanity is very attentive to what is happening” in Ukraine, Sall said, raising the need to free up cereal and fertiliser stocks for export.

“I came to see you to ask that you be aware that our countries, though they are far from the theatre [of war], are the victims of this crisis on an economic level,” he said.

© SEYLLOUSall wipes a tear after a public hospital, where 11 newborns died in a fire

Moscow’s military campaign in Ukraine and a barrage of international sanctions on Russia have disrupted supplies of fertiliser, wheat and other commodities from both countries.

Cereal prices in Africa, the world’s poorest continent, have surged, sharpening the impact of conflict and climate change and sparking fears of social unrest.

Four months into Sall’s one-year term as AU chair, the diplomatic mission to Russia is just one of several ambitious campaigns the Senegalese leader has launched on the world stage.

© Tupac POINTUMap of Senegal locating the city of Tivaouane, where 11 newborn babies died in a hospital fire in May

He has also called for two permanent African seats on the UN Security Council, advocated for the AU to join the G20 and demanded OECD reform to permit longer loan periods to African countries.

“It is good leadership, making sure that the voice of the African continent is heard, and heard loud and clear in today’s world,” said Alioune Tine, the founder of the Dakar-based think tank Afrikajom Center.

He described Sall’s mission to Europe as “completely unprecedented.”

“It is Europeans normally who get involved in African wars; now if Africans do mediation, it’s an excellent thing,” he said in French.

A dozen African countries, including Senegal, rely on Russia and Ukraine for at least half of their wheat imports, according to the UN’s Food and Agriculture Organisation.

Many countries are feeling the combined effects of delayed grain exports and rising fuel prices.

In a recent joint press conference with German Chancellor Olaf Scholz, Sall said African countries were “deeply divided” on the Ukraine conflict. He repeated calls for a ceasefire.

“For Africa, we want peace … We want peace even if we condemn the invasion,” he said, though he himself has shown reticence to clearly condemn Russia’s aggression.

Senegal on March 2 abstained from a UN General Assembly vote to demand “that Russia immediately cease the use of force against Ukraine.”

It did vote for a second resolution on March 24 demanding that Russia stop the war immediately.

Nearly half of the African countries abstained or did not vote in both votes.

Russia has been making inroads in Africa in recent years through military alliances and arms deals. In 2019, Putin hosted dozens of African leaders in Sochi in a bid to reassert Russia’s influence on the continent.

Sall, who had been invited Friday by Russia, also spoke by phone with Putin on March 9. On April 11, he held a call with Ukrainian President Volodymyr Zelensky.

On Saturday, Sall will join an ECOWAS summit in Accra to discuss the putsches in neighbours Mali, Guinea and Burkina Faso.

He has also been invited to this month’s G7 summit in Germany.

“President Macky Sall’s objectives are quite lofty … but he can’t reform the UN, the G20, and the OECD in six months,” said Ibrahim Nyei, a Liberia-based fellow with the Centre for Democracy and Development.

“I think the African Union should confront these issues step-by-step and prioritise them, and the greatest international organisation where you’re going to influence would be the UN Security Council.”

In a recent speech to young African leaders, Sall said he wants two permanent African members on the Security Council — or a reform of the rules so that one country alone cannot veto decisions.

He estimated African issues make up 70 percent of the council’s business.

“Africa must have a say,” said Mbaye Babacar Diop, a Dakar-based consultant. “We have more than one billion people.”

With strong ties to France and the US, as well as relations with China, Israel, Iran and Saudi Arabia, Senegal has one of the broadest diplomatic policies in Africa.

“Senegal has always been a great country of diplomacy,” dating back to the first president, Leopold Sedar Senghor, said Tine.

But, analysts say, in order to maintain legitimacy abroad, Sall must ensure his own house is in order.

Senegal has faced a number of domestic crises in the four months since he took the AU reins.

Sall had to rush back from an AU summit in Equatorial Guinea.

Meanwhile, critics fear he will exploit constitutional changes approved in 2016 to argue that a two-term presidential limit does not apply, in order to run for a third term in 2024.

Those fears contributed to Senegal’s worst protests in years in 2021.

He has said he will announce his decision after legislative elections in July.

AU chair Sall aims to shake up African relations with the West (msn.com)