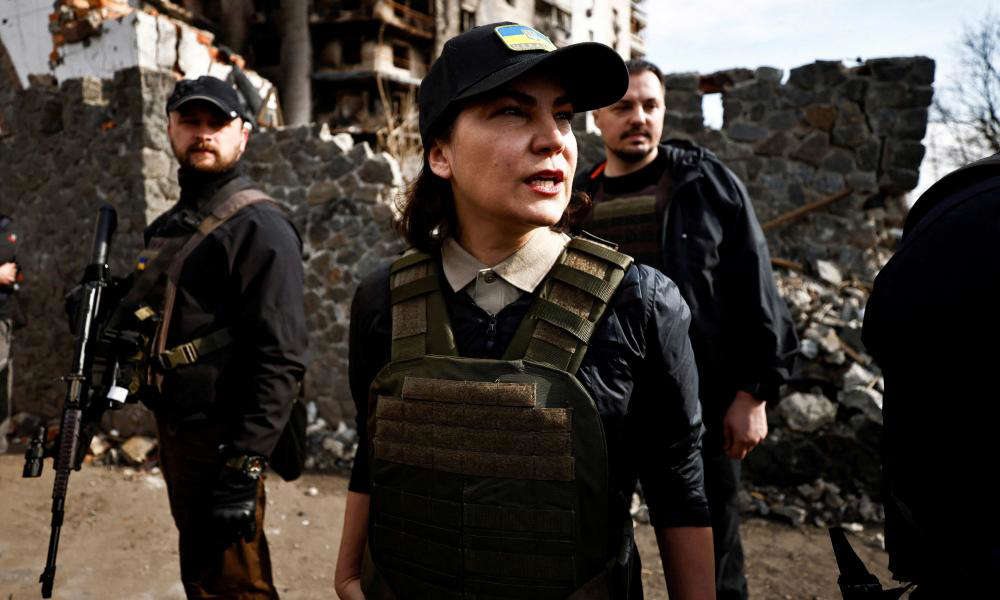 On the third day of the Russian invasion of Ukraine, the mayor of the city of Kupyansk received a call from a Russian army commander suggesting they talk.

Russian forces were already on the outskirts of the city, in the north-eastern Kharkiv region. Mayor Gennady Matsegora released a video address explaining that he had accepted a Russian offer.

“I took the decision to take part in negotiations to avoid loss of life,” he said. Matsegora handed over the city to Russian control without a fight. Later, he allegedly provided Russian soldiers with transportation, housing, fuel and food.

Now he is one of hundreds of Ukrainian citizens accused of collaborating with the invading army, and could face up to 15 years in prison. Kupyansk is still under Russian occupation, so Matsegora has not been arrested, but in places where the Russians have been pushed back, Ukrainian authorities have already made arrests of those suspected of collaboration.

Ukraine’s prosecutor general, Iryna Venediktova, said at the beginning of May that there were more than 700 treason cases open against Ukrainian citizens, and another 700 cases of collaboration. In the besieged Kharkiv region alone, prosecutors said they had now opened 50 cases, including against seven police officers, five mayors and a judge. They all stand accused of paving the way for Moscow to occupy villages and kill dozens of people.

“Out of those 50 people, half have been arrested. The others, unfortunately, remain in the occupied territories and haven’t been arrested yet,” said Oleksandr Filchakov, the chief prosecutor for the Kharkiv region.

The governor of the region, Oleh Synehubov, said there were various forms of collaboration, such as handing over information. “It can include giving the Russians lists of those locals who are in the military, the families of military people, or the people who are veterans of the [Donbas] war,” he said.

Filchakov claimed there were cases of collaborators handing the Russians lists of wealthy local people. “They explained to the occupiers where they live and what kind of riches they possess. So later the Russian soldiers came to those houses together with the collaborators and were stealing their possessions.”

In the village of Pivdenne, the chair of the council was arrested for attempted collaboration. Prosecutors said they found evidence that he had been in touch with Russian agents.

“He was making preparations for the occupation. But the Russians never arrived there and we arrested him a few days after the invasion,” said Maksym Klymovets, a district prosecutor in the Kharkiv region.

For the Ukrainian authorities, it is important to show that punishment for those who helped the Russian invasion will be swift and stern. But at the same time, the process comes with lots of tricky questions.

These include whether Ukraine’s prosecutors and judges, who for years have battled accusations of corruption and nepotism, can be trusted not to abuse the process. Numerous high-ranking officials may also be asked questions about negligence at the beginning of the invasion, or even treason.

On Sunday the president, Volodymyr Zelenskiy, showed that accusations of negligence or worse could extend right to the top of government structures when he fired the head of the SBU security service in Kharkiv during a visit to the city. Zelenskiy accused the man of “thinking only about himself” instead of helping to defend the city during the initial days of the war. “The law enforcement organs will look into what his motives were,” Zelenskiy said.

Ukrainian prosecutors face a particularly tricky task in the occupied areas of southern Ukraine, which were taken by the Russians at the start of the war. There, Russian officials are busy attempting to impose Russian rule over everyday life, such as by moving Ukrainian schools to the Russian curriculum.

If Ukraine regains control of these territories, there could be thousands of people who have committed acts that fall under the technical definition of collaboration, such as teachers who continued to work under the new curriculum. But many feel prosecutors should be lenient when it comes to such cases.

“This is a very difficult and painful question,” said Sergii Gorbachov, the education ombudsman of Ukraine. “It’s very difficult to decide where the line is. I don’t think you can demand heroism from unarmed civilian people. The most important thing is not to voluntarily collaborate. When we get the occupiers off all our land, I expect big problems over how we decide on this question.”

Volodymyr Ariev, an MP with the European Solidarity party headed by Ukraine’s former president Petro Poroshenko, said he hoped parliament would draft a new law on collaboration that would allow for swift and effective punishment but also prevent abuse and rank cases in order of seriousness.

‘A difficult and painful question’: Ukraine ponders how to punish collaborators (msn.com)