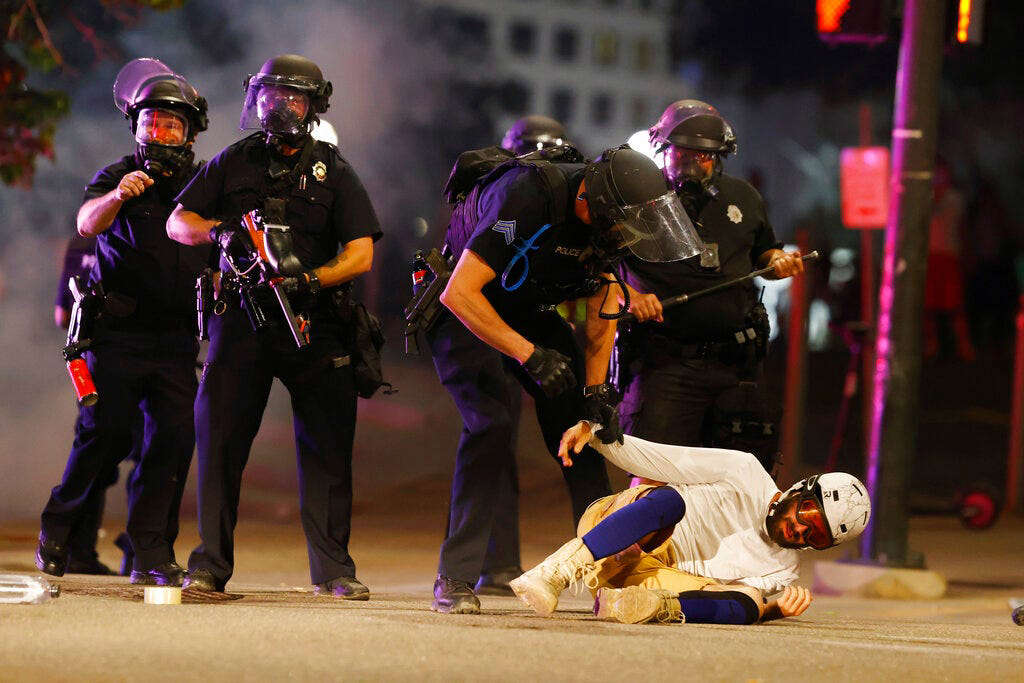 With the Floyd family present, Biden said that in signing the measure, he sought to “address profound fear and trauma, exhaustion” that Black Americans in particular have experienced and to “channel that private pain and public outrage into a rare mark of progress.”

“The message is clear: enough. Just enough,” Biden said of protests across the nation in the wake of Floyd’s death.

Biden’s order requires all federal law-enforcement agencies to limit the use of force, ban the use of chokeholds unless deadly force is authorized, restrict the use of no-knock entry warrants and require the activation of body-worn cameras during arrests and searches.

The order also calls for national accreditation standards for policing and the creation of a national database that will include records of officer misconduct. It also will restrict the transfer or purchase of surplus military equipment to local police and require annual anti-bias training.

“As divided as this nation can feel, today we’re showing the strength of our unity,” Biden said. “This executive order is going to deliver the most significant police reform in decades.”

Biden signed the order at a White House ceremony on the two-year anniversary of the death of Floyd, an unarmed black man who died in Minneapolis police custody on May 25, 2020, after a white officer used his knee to pin Floyd to the ground.

Floyd’s relatives attended the ceremony, along with the families of other people killed by police, including relatives of Breonna Taylor, who was shot and killed in her Louisville, Ky., home on March 13, 2020, by police officers who broke down her door to serve a search warrant.

Biden’s order, which will impact more than 100,000 federal law-enforcement officers, follows the collapse last September of an effort in Congress to pass legislation aimed at holding police accountable for violence in the line of duty.

In the months that followed Floyd’s killing, protesters took to the streets in Minneapolis and around the country to protest police brutality and racism. Some of that unrest was violent.

When four officers were convicted last year for killing Floyd, Biden urged Congress to pass legislation to reform police by the anniversary of his death. A bipartisan group of lawmakers met for months behind closed doors but was unable to agree on how to bolster transparency within police departments and collect data on use of force.

With Congress deadlocked, Biden promised to use the limited powers of his office to order change.

He said Wednesday that he did not act until now because he worried “it would undercut” the bipartisan effort to get policing legislation passed. When those efforts stalled, Biden said he began working on an executive order.

“I sincerely thank you all for your tireless efforts,” he told lawmakers who were part of the negotiations. “But they’re not over.”

Vice President Kamala Harris, who was a lead sponsor of the George Floyd Justice in Policing Act when she was in the Senate, said at the Wednesday event that Biden’s executive order is not a substitute for the legislation and pushed lawmakers to revisit the bill.

Harris said in remarks before Biden’s that families whose relatives died while in police custody should have not have to mourn the loss of a loved one.

“You should never have had to mourn in order for our nation to feel your pain and to understand what is wrong and to agree that something must be done,” Harris said.

Biden gave Harris the pen he used to sign the executive order, in recognition of her work on the issue. But the vice president gave it to Floyd’s daughter, Gianna, whom she invited to the stage near the end of the event.

The president led the room in a round of applause for Floyd’s daughter, whom he told as she approached him, “You’re getting so big.”

Biden’s executive order was lauded by from some groups pushing for greater police accountability, but they stressed that more needs to be done.

“We know full well that an executive order cannot address America’s policing crisis the same way Congress has the ability to, but we’ve got to do everything we can,” said Derrick Johnson, president of the NAACP. “There’s no better way to honor George Floyd’s legacy than for President Biden to take action by signing a police reform executive order.”

But, “it is still imperative that Congress pass national police accountability legislation to address the killings of Black women, men, and children around the country by law enforcement,” as well as the deaths and mistreatment of people of color by police more generally, Hewitt said.

Biden said Wednesday that he and Harris would continue to push Congress to pass meaningful police reform legislation that affects other law enforcement agencies.