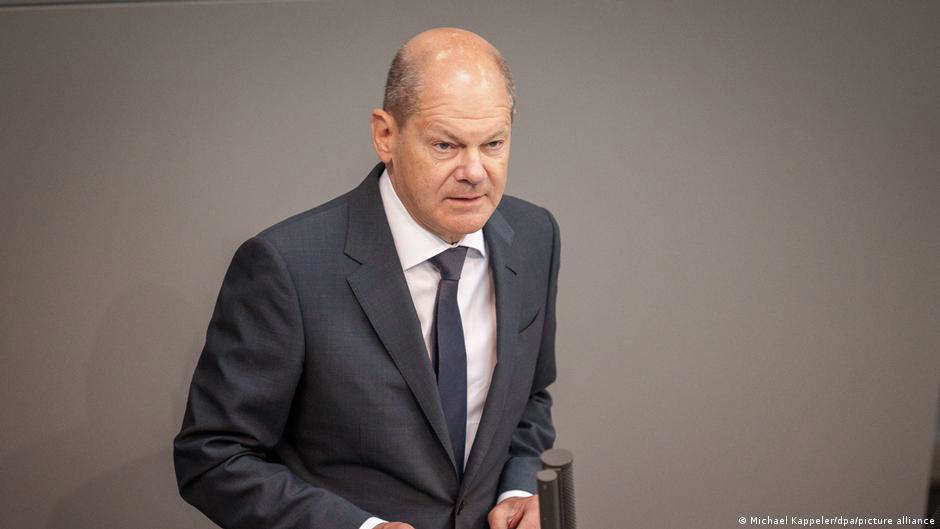 Scholz addressed Germany’s lower house of parliament, the Bundestag, on Thursday ahead of an extraordinary EU summit on Ukraine later this month.

The German chancellor was widely expected to use the speech to outline his policy surrounding the conflict, which has now raged for nearly three months.

Scholz has faced heavy criticism over his response to the war, perceived by some critics as weak and over-cautious.

Berlin has been criticized for a delay in sending heavy weapons to Ukraine and, unlike many other European leaders, Scholz has still not visited Kyiv.

What did Scholz say about the war in Ukraine?

Scholz called the war in Ukraine the greatest crisis facing the EU in its history. But said that European solidarity was the counterweight to autocracy in Vladimir Putin’s Russia.

“Peace is only something we can take for granted if we are prepared to defend it. This is the lesson that we have learned from the brutal Russian attack on Ukraine.”

Scholz described the Ukraine war as a “turning point in history.” He said that EU member states would, as in other crises, confront it with solidarity.

“The greater the pressure from the outside, the more we join forces as the European Union and act together.”

“We all share one goal, Russia must not win this war, Ukraine must prevail,” Scholz said.

This is why, he explained, Germany has been supporting Ukraine with aid and even heavy weapons, as well as taking in Ukrainian refugees.

“A brutally attacked country needs help in defending itself and doing so cannot be termed escalation.”

“Friends in Sweden and Finland, you are most cordially welcome, with you on our side NATO will become even stronger and Europe even safe,” the Chancellor said in reference to the bids launched by the two Nordic countries on Wednesday.

“We as the European Union must pave the way for a solidarity fund fed by membership fees from the European Union and our international partners. That way we will help the Ukrainians to clear the destruction and to rebuild,” he said.

Ukraine remains part of our “European family” Scholz said, adding that Ukraine needs long-term support while it requests to join the EU, something for which there is no “shortcut.”

The chancellor pointed to the Western Balkan countries that have been seeking EU membership for years, saying they should not be overlooked. He will visit the candidate countries ahead of the EU summit.

Bringing up the energy crisis, he said “our aim is clear, we want to ensure that we increase Europe’s sovereignty with regard to energy and achieve our climate goals together.”

“It is my firm conviction that we will overcome the impacts here in Europe and across the globe, because we here are a strong country, we have strong partners and strong alliances,” Scholz said in his concluding remarks. “But also, because we know what we are defending: peace, liberty, and rule of law.”

What is the special summit about?

The extraordinary EU summit on May 30 and 31 is expected to focus on the war in Ukraine and its consequences.

Possible topics for heads of state and government who are to meet in Brussels are a planned oil embargo against Russia and the EU Commission’s longer-term plan to wean the bloc off Russian fossil fuels.

They could also discuss the prospect of Ukraine joining the EU, although a decision on the country’s candidate status is to be made in June at the earliest.

Marathon session of debates and votes

The statement was scheduled ahead of a debate lasting just under two hours, expected to address the same themes.

The Bundestag was also set to discuss and vote on numerous other bills on Thursday as part of a marathon 14-hour session. They included a new coronavirus relief package, the enforcement of Russia sanctions, funding for the cheaper public transport, and accelerated construction of liquefied natural gas terminals.