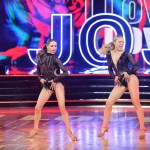 The ‘Dancing With the Stars’ season 30 finale crowned a new champion! The first and second place pairs made ‘DWTS’ history. So, who took home the mirrorball trophy?

After weeks of competition, it’s all led to this. Amanda Kloots, Iman Shumpert, Jojo Siwa, and Cody Rigsby are hitting the dance floor in hopes of being crowned the new Dancing With the Stars champion. The previously eliminated contestants join the finalists and the pros for an epic group performance to the BTS hit “Dynamite.” Tyra Banks reveals that Julianne Hough has joined the judges’ panel after her brother, Derek Hough, was diagnosed with a breakthrough case of COVID-19.

The final 4 couples will be performing twice during the finale. Amanda and Alan Bersten kick off the finale with a Viennese waltz and Paso Doble fusion to “Never Tear Us Apart” by Bishop Briggs. Julianne notes that “consistency” has been Amanda’s strength all season long. Bruno Tonioli says the chemistry between Amanda and Alan was “sizzling.” Carrie Ann Inaba points out a “little stumble” Amanda had right at the end. Amanda and Alan’s scores: Carrie Ann = 9; Len = 10; Julianne = 9; Bruno = 10. Total Score = 38 out of 40.

Amanda Kloots and Alan Bersten during the ‘DWTS’ finale. (ABC)

Next, Cody and Cheryl Burke tackle a Paso Doble and cha-cha fusion to “Free Your Mind” by En Vogue. Carrie Ann has to rave over how far Cody has “truly come” since the beginning of the season. She adds that this performance was “so strong.” Len has one small critique of the performance but says Cody has been “brilliant” overall this season. Cody and Cheryl’s scores: Carrie Ann = 9; Len = 9; Julianne = 9; Bruno = 9. Total Score = 36 out of 40.

Jojo and Jenna Johnson wow their Tango and cha-cha fusion to “I Love It” by Icona Pop featuring Charli XCX. Carrie Ann is stunned by the performance and says she has witnessed a “woman transformed” this season with Jojo. Len says Jojo proves it doesn’t matter if it’s a girl dancing with a girl or a guy dancing with a guy, if the “dancing’s great, magic happens.” Bruno stands up and yells that the performance was “freaking awesome.” He admits he was analyzing every aspect of the performance, and it was all “perfection.” Jojo and Jenna’s scores: Carrie Ann = 10; Len = 10; Julianne = 10; Bruno = 10. Total Score = 40 out of 40.

Iman and Daniella Karagach hit the dance floor with their cha-cha and foxtrot fusion to “September” by Earth, Wind & Fire. Len raves that there was “no confusion in the fusion” with this performance. Julianne admits that she’s never thought Iman was the underdog whatsoever. Bruno declares that the “eagle has risen to new heights” and Iman is now “king of the ballroom.” Iman and Daniella’s scores: Carrie Ann = 10; Len = 10; Julianne = 10; Bruno = 10. Total Score = 40 out of 40.

Cody Rigsby and Cheryl Burke during the ‘DWTS’ finale. (ABC)

The first freestyle of the night is from Cody and Cheryl. They dance to a medley of “Beethoven’s Fifth” and “Nails, Hair, Hips, Heels (Just Dance Version)” by Todrick Hall. Julianne admits she feels “more alive” and more “free” after watching this performance. Carrie Ann raves this was the “most flamboyant freestyle we have ever seen.” Len says the performance was “wild, it was wacky, and it was wonderful. Cody and Cheryl’s scores: Carrie Ann = 10; Len = 10; Julianne = 10; Bruno = 10. Total Score = 40 out of 40.

Amanda and Alan hit the ballroom one last time for a joyous freestyle to “A Sky Full of Stars” by Coldplay. Bruno gushes that he’s witnessed a “star reborn” in front of his eyes. He tells Amanda to “keep that light alive.” Carrie, who begins to tear up, says, “You are hope and resilience personified.” Amanda and Alan’s scores: Carrie Ann = 10; Len = 10; Julianne = 10; Bruno = 10. Total Score = 40 out of 40.

Iman and Daniella are the final couple to perform their freestyle. They light up the house to “Lose Control” by Missy Elliott featuring Ciara & Fat Man Scoop and “Bounce” by DJ Clent. Julianne’s jaw is basically on the floor. She declares, “That was my favorite freestyle I have ever seen in 30 seasons.” Bruno admits Iman’s Chicago-style footwork blew his mind. Carrie Ann admits that the performance was “sick” and loved that he showcased Daniella. Iman and Daniella’s scores: Carrie Ann = 10; Len = 10; Julianne = 10; Bruno = 10. Total Score = 40 out of 40.