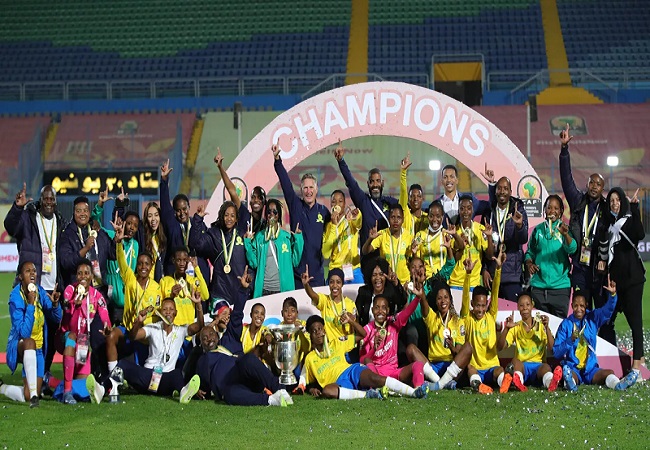 The South African side took the game to Hasaacas Ladies in the opening exchanges and came close to going ahead from a set-piece in the 15th minute after Lerato Kgasago’s dipping strike sailed just over the crossbar.

Banyana Ba Style had a scary moment in the 24th minute after Rahama Jafaru went down from a challenge inside the box, with the Video Assistant Referee (VAR) reviewing the incident but did not spot any infringement.

However, Sundowns eventually broke the deadlock in the 33rd minute from a slick attacking move, as Mgcoyi went through on goal on the right side of the box and played a square pass that was tapped home by Chuene Morifi at the far post.

Sundowns held Hasaacas in their own half,. But Letona Daweti had a glorious chance just before the hour-mark after going through one-on-one with goalkeeper Grace Buoadu. But she miscued her lobbed effort.

Mgcoyi eventually doubled the lead for Banyana Ba Style in the 65th minute with a composed strike past Buoadu in one-on-one situation after a delightful through ball from Nonhlanhla Mthandi.

Hasaacas had a chance to pull a goal back in the last 12 minutes from a free-kick just outside the box but Perpetual Agyekum saw her free-kick palmed over the crossbar by Sundowns shot-stopper Andile Dlamini.

Sundowns Ladies were did finish the game with a player less after Regina Mogolola, who had just come on, was sent off after for a lunging tackle following a VAR review. But Banyana Ba Style were out sight and were crowned African champions.

With the Sundowns Ladies having won the CAF Women’s Champions League, they have successfully completely a double feat for the club, which has since seen both their women’s and men’s side win their respective competitions. The men’s side lifted the competition’s trophy under the tutelage of now Al Ahly coach Pitso Mosimane in 2016.