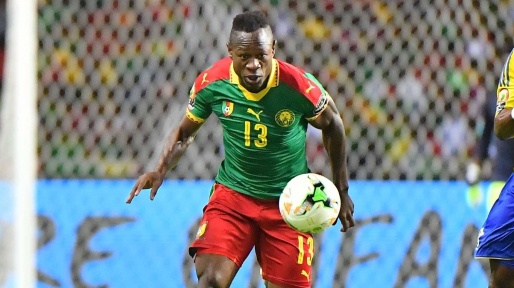 The Indomitable Lions of Cameroon eased past 10-member Flames of Malawi 4-0 in South Africa on Saturday afternoon to lead Group D of the World Cup qualifiers.

Cameroon assumed leadership of the group with 12 points from five games, displacing temporalily Ivory Coast who go into their home match against bottom-placed Mozambique later on Saturday night trailing by two points.

Malawi remain on third place in the group with three points from five games and are out of the qualification race alongside the Mambas of Mozambique who have a mere one point.

During the match on Saturday, Malawi suffered a numerical setback as midfielder John Banda was shown a straight red card after using his left arm to block Aboubacar’s goal-bound shot.

Apart from the red card, the referee awarded Cameroon a penalty which Aboubacar converted after sending Munthali the wrong way in the 21st minute.

With four minutes to half-time, Cameroon added the second goal when Nguissa volleyed past Munthali at the near post via a slight deflection.

In the second half,  Bassogog turned Malawi left-back Francis Mlimbika inside out before drilling the ball past Munthali with five minutes to full-time.

Malawi coach Meke Mwase had started with goalkeeper Munthali who has replaced Richard Chipuwa who started in the last match which Malawi lost 3-0 to Ivory Coast.

Mlimbika has also earned his return to action after a four-year absence from the national team. He has been recalled due to the long-term injury of Precious Sambani.

Upfront, the Flames were without talisman Gabadinho Mhango.