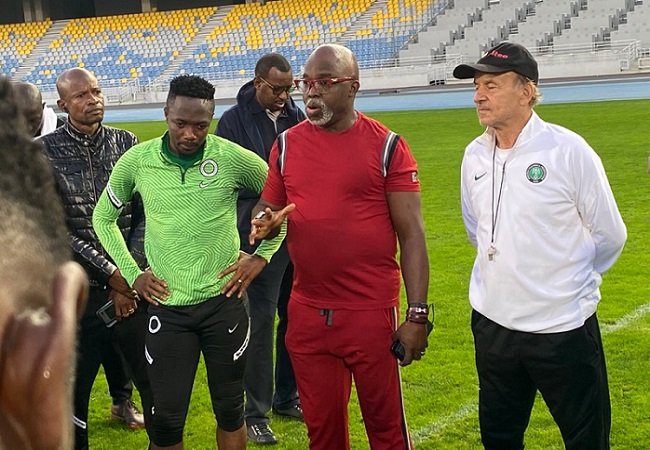 President of the Nigeria Football Federation (NFF), Mr Amaju Melvin Pinnick has told the Super Eagles to leave no room for errors when they square up against the Lone Star of Liberia in their penultimate match of the group phase of FIFA World Cup Qatar 2022 qualifying race in Tangier on Saturday evening.

Speaking to the players after Friday’s official training at the impressive Grand Stade de Tangier, Pinnick charged the players to work assiduously as a team to earn the win that would lift the pressure off their shoulders going into the final group phase encounter against Cape Verde’s Blue Sharks in Lagos on Tuesday.

“I have seen the training. And I am impressed by the level of seriousness, fitness and commitment. The spirit is great. And I believe you will do the job tomorrow. Let us leave very few room for mistakes. In fact, no room for errors at all. I don’t need to start telling you how much Nigerians from all walks of life are looking forward to you picking up the three points here. The three points are important. And we should put them in our bags as we fly back to Nigeria tomorrow night.”

Victory in Saturday’s game, and failure by Cape Verde to amass all three points against Central African Republic on the island of Mindelo, will send the Super Eagles to the knockout round of the qualifying series with a game to spare.

Nigeria are on nine points, two more than Cape Verde, meaning another three points. And any form of stumble by the Blue Sharks will make the Super Eagles unassailable going into the final match on Tuesday.