It’s the return of the Queen. In Beyoncé’s new song from the ‘King Richard’ soundtrack, the icon celebrated Black excellence and how hard women have to ‘fight’ to make it.

After maintaining a low music profile for most of 2021, Beyoncé decided to close out the year by dropping “Be Alive,” a new song featured in King Richard, the Will Smith-starring biopic covering the rise of Venus and Serena Williams from the perspective of their father, Richard (played by Will.) Being that this movie covers not just the Williams’ controversial father but the sisters’ rise to being tennis icons, it’s fitting that Beyoncé’s track is about Black female excellence.

Ahead of King Richard’s Nov. 19 debut in theatres and on HBO Max, there were rumblings of new music from Bey. Insider called “Be Alive” one of “the most emotional moments” in the movie, describing the track as having a “powerful, drum-heavy rhythm quality” like “Freedom” from Bey’s 2019 album, Lemonade. “I got all my sisters by my side / I couldn’t rub this Black off even if I tried,” Bey sang. Variety also noted that the song had backing singers intone, “It feels so good to be alive, that’s why I live my life with pride,” while Beyonce’s voice “soars” with, “Do you know how much we have pride / How hard we have to try?”

Beyoncé’s “Be Alive” is her first new original song since the surprise release of “Black Parade” on Juneteenth 2020. The track went on to win the 2021 Grammy for Best R&B Performance. It was also nominated for Record of the Year, Song of the Year, and Best R&B Song. Beyoncé was the most nominated artist that night, with nine nods. She also took home Best Rap Performance and Best Rap Song for her “Savage” remix with Megan Thee Stallion and one for Best Music Video (which also gave her daughter Blue Ivy Carter her first Grammy.) Beyoncé ultimately passed by Alison Krauss to take the record for most Grammys ever won by a singer, male or female, with 28. However, the Los Angeles Times noted that out of those 79 nominations, the Grammys have only given Bey one award in the major categories – Song of the Year, for “Single Ladies” in 2010 – while denying her Record of the Year, Album of the Year, and Best New Artist. 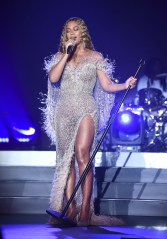 In September, Bey did cover “Moon River” as part of a Tiffany’s campaign. The song was the one Audrey Hepburn famously sang in 1961’s Breakfast at Tiffany’s, per Pitchfork.

Bey spoke about the possibility of new music in an August 2021 interview with Harper’s Bazaar. “With all the isolation and injustice over the past year, I think we are all ready to escape, travel, love, and laugh again. I feel a renaissance emerging, and I want to be part of nurturing that escape in any way possible,” she said. “I’ve been in the studio for a year and a half. Sometimes it takes a year for me to personally search through thousands of sounds to find just the right kick or snare. One chorus can have up to 200 stacked harmonies. Still, there’s nothing like the amount of love, passion, and healing that I feel in the recording studio. After 31 years, it feels just as exciting as it did when I was nine years old. Yes, the music is coming!