ELDORET, Uasin Gishu County, 5th November 2021 (PSCU)—President Uhuru Kenyatta has challenged the new Kenya Defence Forces (KDF) soldiers to be outstanding in their service and conduct in line with the long tradition of excellence associated with the Kenyan military. 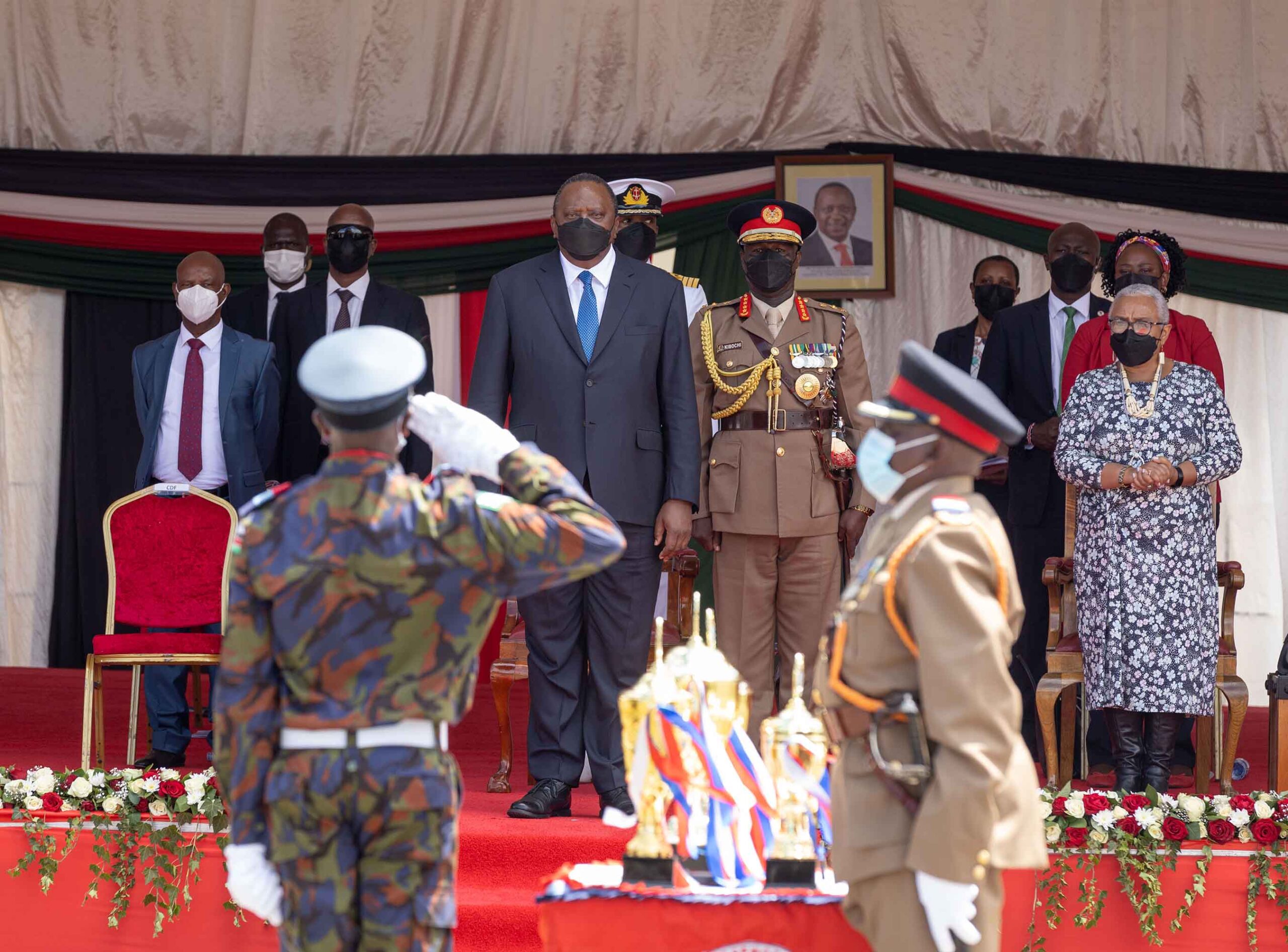 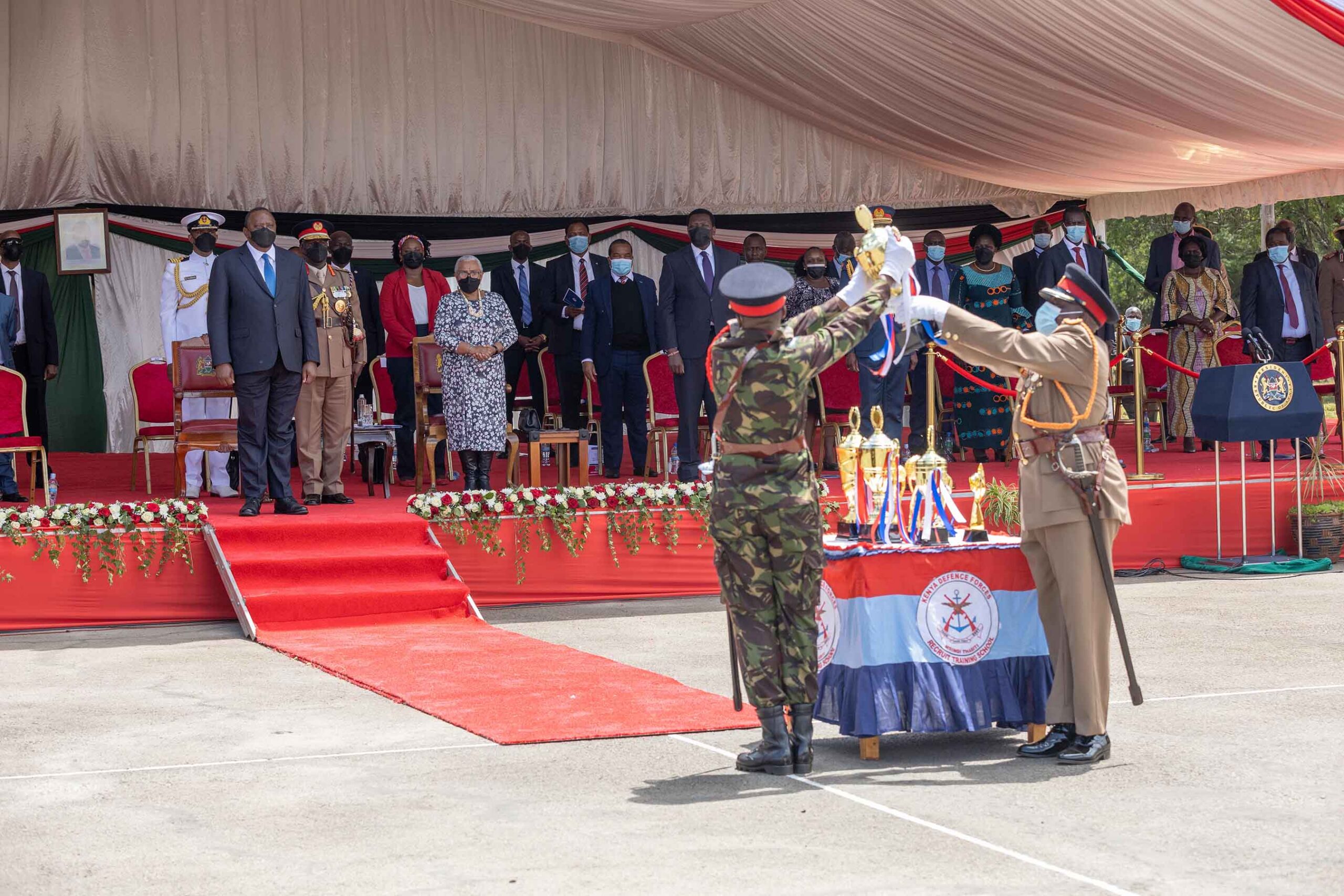 Speaking when he presided over this year’s KDF recruits pass-out parade at their training school in the outskirts of Eldoret town, the President, who was accompanied to the colourful ceremony by First Lady Margaret Kenyatta, advised the soldiers to be model soldiers worth emulation, in and outside their camps. 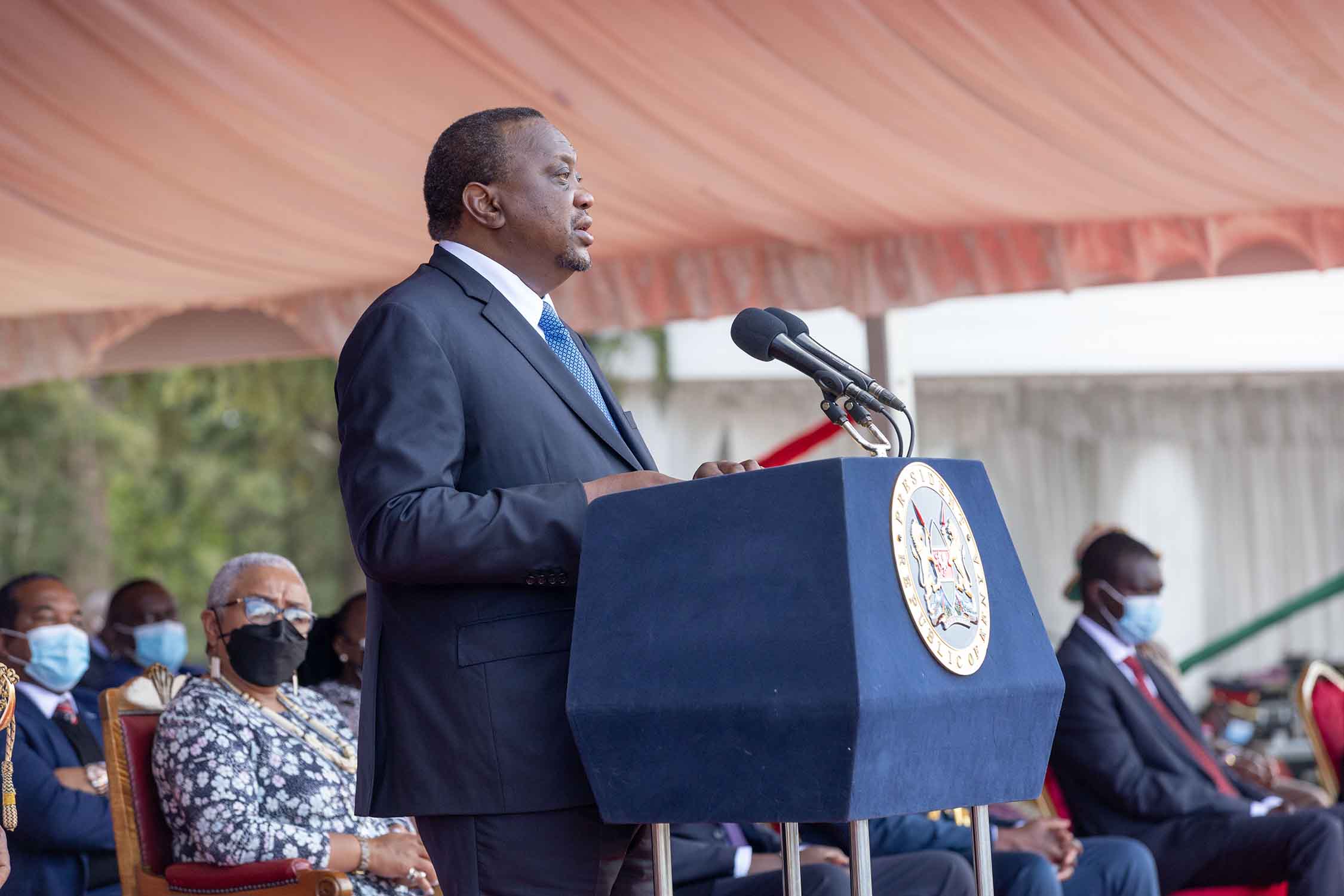 “You must always distinguish yourselves by carrying out your duties with discipline and deference to authority. You must adhere to every norm, rule, and law that governs your operations. You must be loyal to our nation, our values, and our institutions. In everything you do, whether in or out of uniform, whether on duty or off-duty, you must be above reproach and the model soldier,” he said. 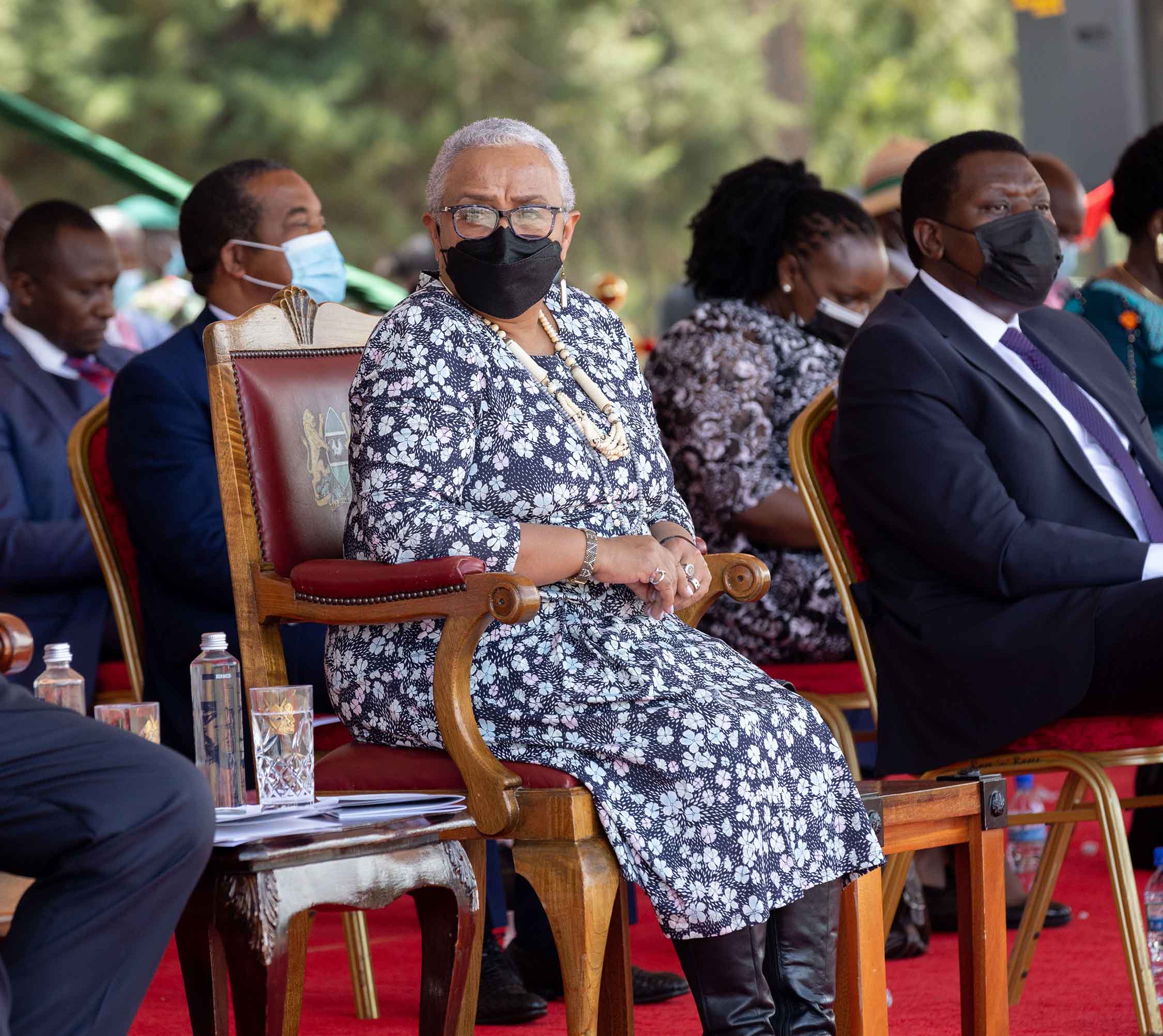 President Kenyatta noted that KDF had a tradition of excellence, honour, duty, and professionalism which places the Kenyan military way above its contemporaries. 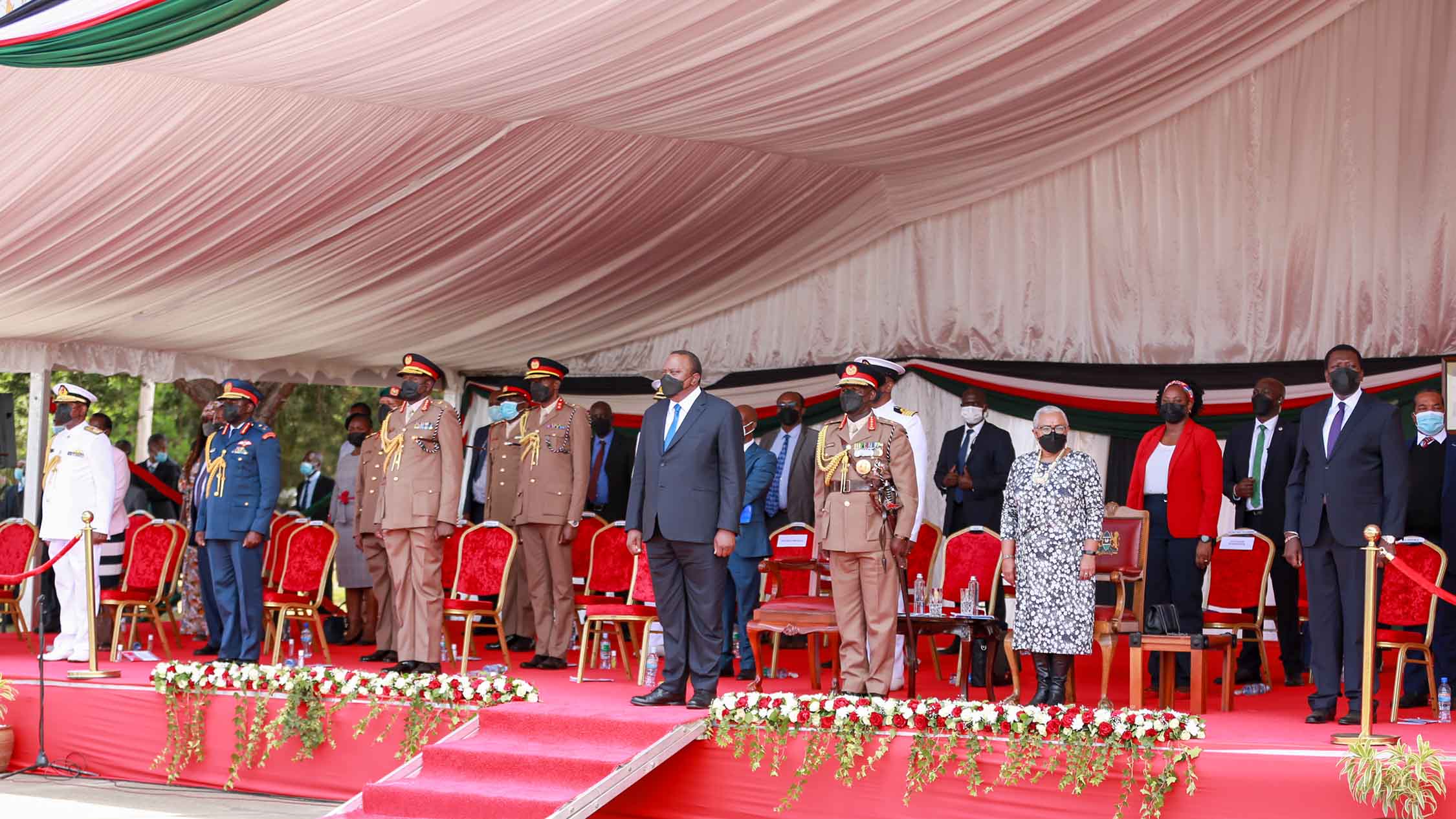 President Uhuru Kenyatta and First Lady Margaret Kenyatta with Cabinet secretary for Defence Eugene Wamalwa, Chief of Defence Forces General Robert Kibochi and service commanders during a march-past by the graduating contingent of the Kenya Defence Forces at the Moi Barracks Recruits Training School in Eldoret during this year’s passing-out parade ceremony.

“This is the proud history, culture, and heritage that today’s graduands are so privileged to join…You must wake up every day committed to going to bed a better soldier than when you woke-up. Have a passion for your profession; and take pride in your work. Be the soldier that future graduands look up to and seek to model their behaviour on,” he said.

While congratulating the graduands for the successful completion of the basic training course, the President said their admission into KDF was significant because they were joining the service at a time when Kenya is facing external threats.

“I congratulate you all for successfully completing your basic training. You are joining the ranks of our defence forces at a consequential time in our nation’s history; a time when our sovereignty and the inviolability of our borders are subject to unprecedented threats,” he said.

“We have invested heavily in upscaling our aerial, maritime, and land equipment; added new bases; bolstered the size of our forces by additional recruitment; improved the remuneration and benefits of personnel; and adopted the training and operational practices demanded by a fluid security environment.

“As a result, Kenya boasts a highly capable, well equipped, and superbly trained military that can deliver superlative results across a variety of missions. Whether it is in international peacekeeping operations, or in defending our borders, or in assisting civilian agencies in humanitarian disaster response, or in collaborating with other concerned agencies within the security and intelligence sectors; KDF serves with unflinching duty and admirable purpose,” he said.

The President urged Kenyans to cooperate with security agencies at all times and to always report threats to the country’s peace and security.

“I urge every Kenyan to work together in unity of purpose; and to actively cooperate with our Security Agencies.   Kenyans we must have the courage to report any threat to our nation that may come into their knowledge,” said the President.

At the ceremony, also attended by several senior Government and military officials led by Defence CS Eugene Wamalwa, Uasin Gishu Governor Jackson Mandago and Chief of the Defence Forces Robert Kibochi, graduands who excelled in different aspects of their training were awarded by President Kenyatta.

Meshack Kiptanui and Josphat Kamau Gatheca, both of Kenya Army were awarded for being best and second best recruits respectively while Braxildah Chepkorir of Kenya was honored for emerging the best female recruit. The award for the best combat marksmans was won by Yaasini Ahmad Hausi of Kenya Navy.