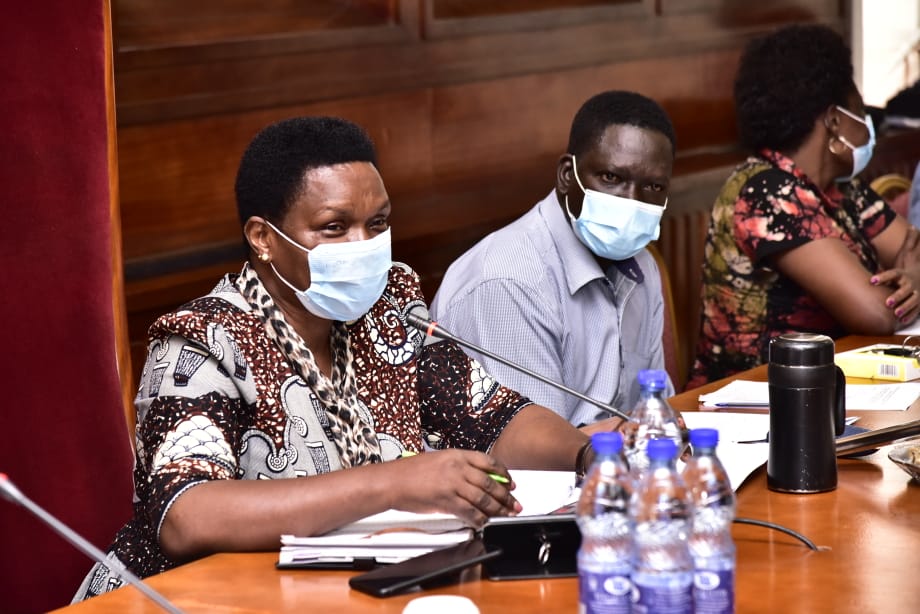 Hon. Okori-Moe Janet (left), the Chairperson of the Committee on Agriculture, Animal Industry and Fisheries

The Committee on Agriculture, Animal Industry and Fisheries invited the MPs as stakeholders to scrutinize the Fisheries and Aquaculture Bill 2021 on Friday, 5 November 2021 at Parliament.

Speaking on behalf of the Parliamentary Forum on Fisheries, Hon. Robert Migadde (NRM, Buvuma Islands County) told the Committee that for the Bill to stand the test of time, issues such as fishing methods, equipment, fishing jurisdictions, taxation and preservation methods would need to be harmonised.

The legislators sought to have a number of amendments in the Bill most notably restricting a member of the surveillance unit on improper fishing to exercise their powers of entry and mounting a search only in the presence of an LC 1 representative.

They demanded that Chief Fisheries Officers publish the maximum allowed fishing effort in a fishing area as opposed to determining the maximum limit without public disclosure.

“We want to encourage transparency among these technocrats, promote proper monitoring by the local government and prevent abuse of these powers,” Migadde said.

Migadde proposed that the Chief Fisheries Officer prepares and publishes the minimum hygiene requirements as prescribed in the code of practice of safety and quality assurance in the artisanal fisheries subsector, contrary to the Bill proposal that negates publication of the aforementioned requirements.

Migadde argued that, “most of these people barely get by and therefore the proposed fine is too steep for many of them to meet because they do not reap much from fish farming.”

For Clauses 108 and 109 of the Bill that fail to clearly state the unlawful fishing methods and fishing size, the MPs proposed that the Bill clearly stipulates the acceptable dimensions for the fishing gear and recommendable size of the various fish species.

The MPs also demanded that a provision is created in the Bill catering for people who may not have licenses but fish for consumption instead of commercial purposes.

The Committee Chairperson, Janet Okori-Moe, promised the MPs that they would reach out to all stakeholders before forwarding the Bill to Parliament.