HomeAfricaHolders Manchester City were knocked out of the Carabao Cup after West...
AfricaBreaking NewsEast Africa

Holders Manchester City were knocked out of the Carabao Cup after West Ham United won 5-3 on penalties in front of an ecstatic sell-out crowd at London Stadium. 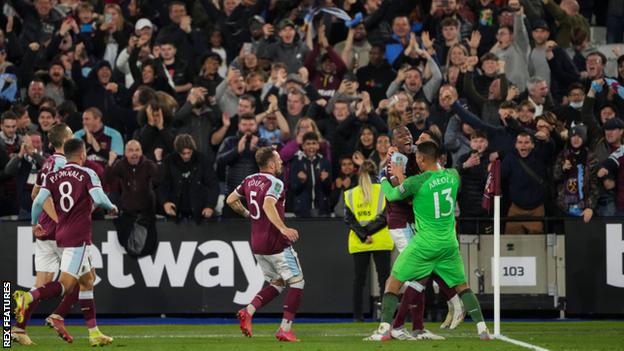 Holders Manchester City were knocked out of the Carabao Cup after West Ham United won 5-3 on penalties in front of an ecstatic sell-out crowd at London Stadium.

The fourth-round tie had ended goalless after 90 minutes before Said Benrahma scored the decisive spot-kick.

Phil Foden fired his penalty wide to give the Hammers the advantage in the shootout.

It is the first time since 2016 City, who have won the competition for the past four seasons, have been eliminated.

Pep Guardiola made nine changes to his side but City finished the 90 minutes with substitutes Foden, Gabriel Jesus and Jack Grealish on the pitch as they searched for a winner in normal time.

Despite peppering West Ham’s goal with 25 attempts, they could not find a breakthrough as the hosts claimed a famous win to advance to Saturday’s quarter-final draw.

“It’s been an incredible run,” said Guardiola after his hopes of winning the competition for a fifth straight season ended.

“On penalties they were better, congratulations to West Ham and we’ll be back next year.

“Unfortunately Phil missed it, but it’s experience and when you get this kind of experience, next time he will be better.”

Nathan Ake should have headed City ahead in the first half before Ilkay Gundogan missed another chance from an angle.

Such has been City’s dominance in the competition that this was the first time they have been knocked out of it since losing to Manchester United at Old Trafford five years ago.

West Ham scored all five of their penalties and have now knocked out both Manchester clubs on their way to the last-eight after winning at Old Trafford in the third round.

Their season continues to gather momentum under David Moyes.

Sitting fourth in the Premier League, they have won all three Europa League group games and now find themselves in the last eight of the Carabao Cup.

Guardiola added: “They are doing well in the Premier League, the Europa League and now they are in the quarter-finals of the Carabao Cup. A fantastic team, a fantastic manager.”

Moyes made eight changes against City but his side dug deep to frustrate the visitors and have now kept four successive clean sheets.

“The players deserve all the credit, while the manager drives this club on a daily basis. He’s done a wonderful job at this club,” he added.

Shots on Target
Home2
Away7