Cristiano Ronaldo’s soaring header completes STUNNING comeback for Manchester United against Atalanta at rocking Old Trafford, after Solskjaer’s side went 2-0 down in woeful first half

By MARTIN SAMUEL FOR THE DAILY MAIL

Well, they did it again. Coming into the 53rd minute, Manchester United were 2-0 down and bottom of Group F. Coming out of the 81st minute they were 3-2 up, and top.

It was that man again of course, Cristiano Ronaldo, with the winner. One has every right to ask, mind, how a team with him, and Marcus Rashford, and Bruno Fernandes, and Paul Pogba, Jadon Sancho and Edinson Cavani coming on from the substitutes’ bench, can end up needing to chase a home game against Atalanta so desperately?

Their resilience is always to be admired, but why is it required so often? Manchester United were outstanding in the second half but ultimately came back from two down at half-time because of that tried and tested strategy: moments.

So two down became 3-2 up because Ronaldo is one of the finest goalscorers the world has ever seen, Rashford is a superb striker and Atalanta will not face a team with a concentration of players like this in Serie A all season. 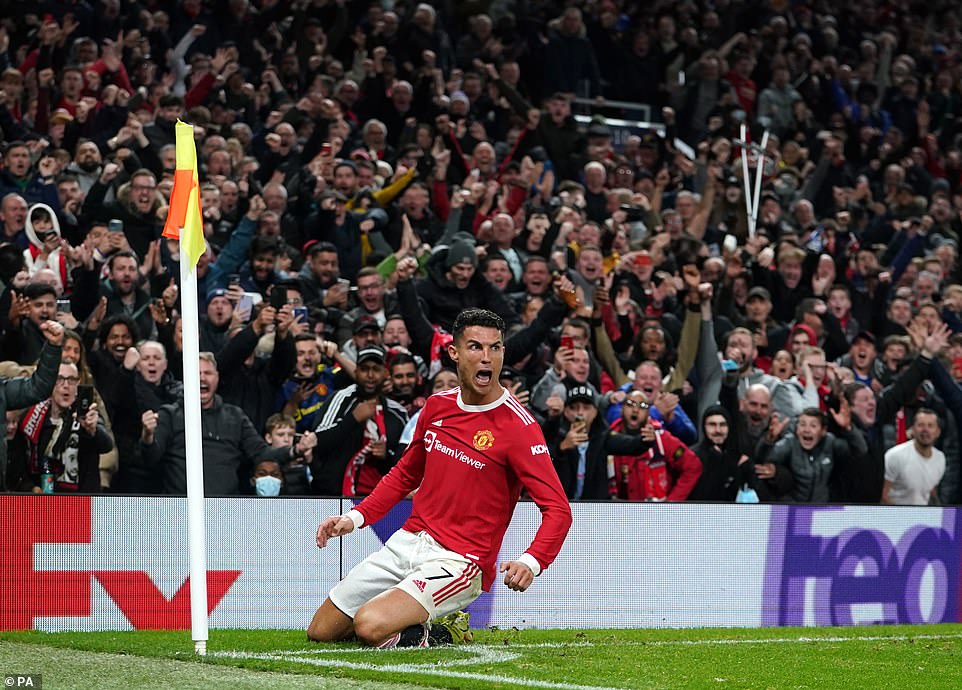 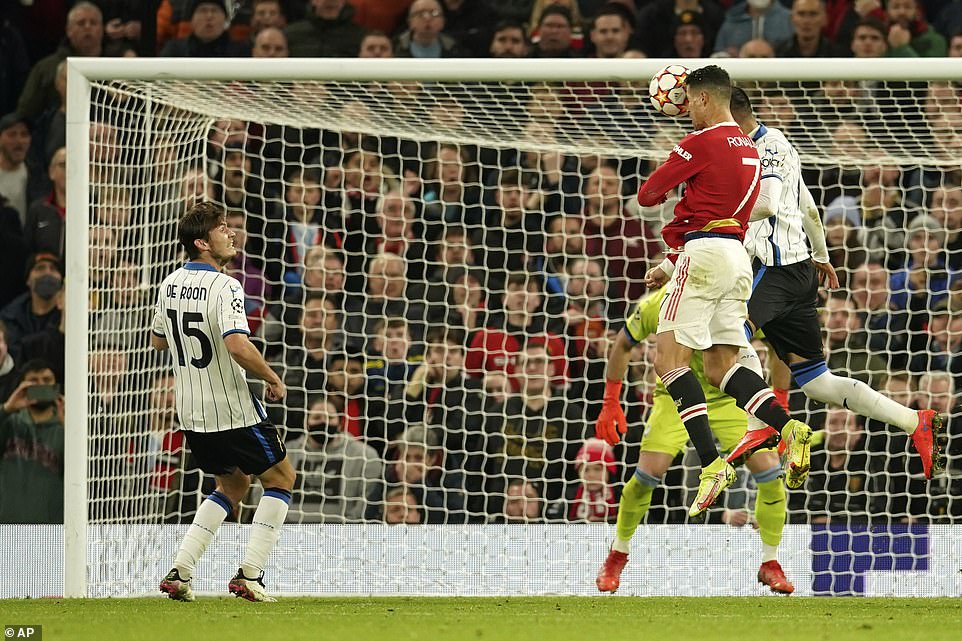 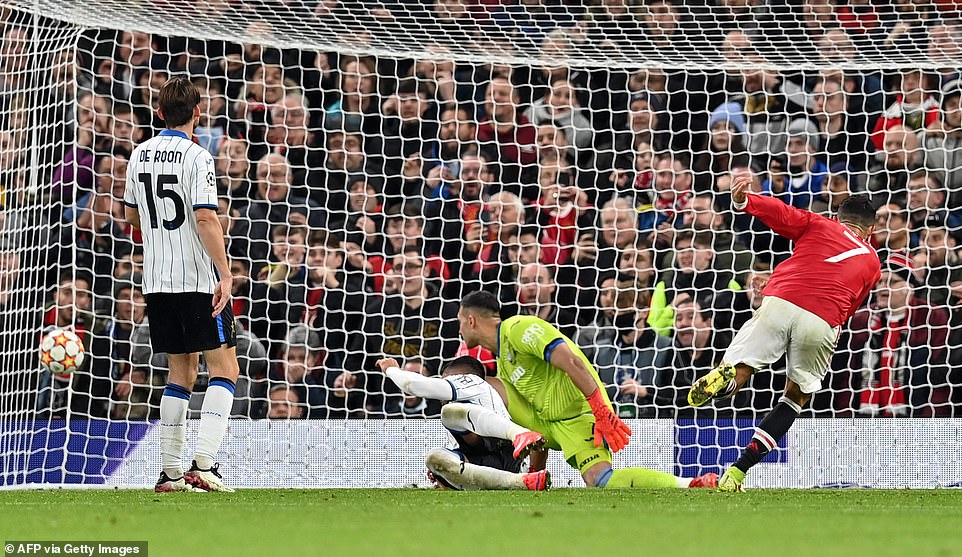 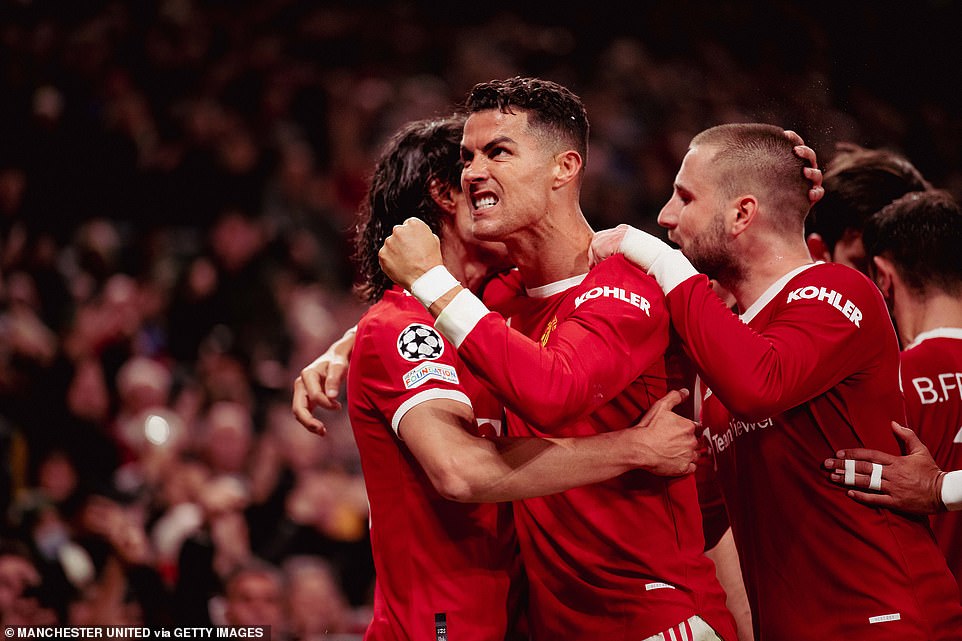 The 36-year-old roars with delight after scoring the winner, while his team-mates congratulate him for his header

Yet do not be fooled. Nothing can be guaranteed, even from here. United’s next two Champions League games are away to Atalanta and Villarreal and they cannot keep relying on second-half fightbacks to give them an edge.

Eventually one will not go their way; and this is a very tight group. Were United to lose their next two games fixtures, as long as the matches with Young Boys went to form, they could still be out of it before matchday six. Their toughest tests lie ahead.

Still, credit where it’s due. United were brilliant after half-time when they simply frightened the life out of Atalanta, scored three and could have had more. Often the Italians had no answer to their offensive marauding. At one point, three Atalanta players were booked in as many minutes as they sought to control United by any means necessary.

And three United goals were scored without reply, too, in what is probably the high point of the season so far – a 28-minute spell in which they simply swept the opposition aside.

It began in the 53rd minute with a moment of good fortune, a poor pass from Josip Ilicic straight to Bruno Fernandes. His clever flick sent Rashford clear and, having missed a couple in the first half, third time proved a charm, his second goal in two games since returning from injury, the ball sent sweetly into the far corner of the net. 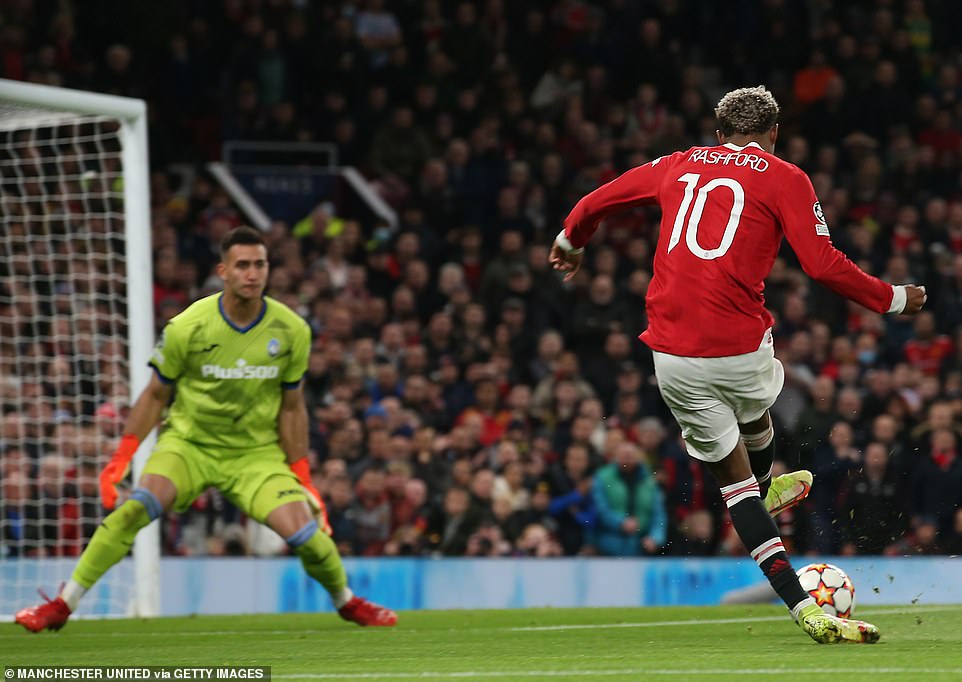 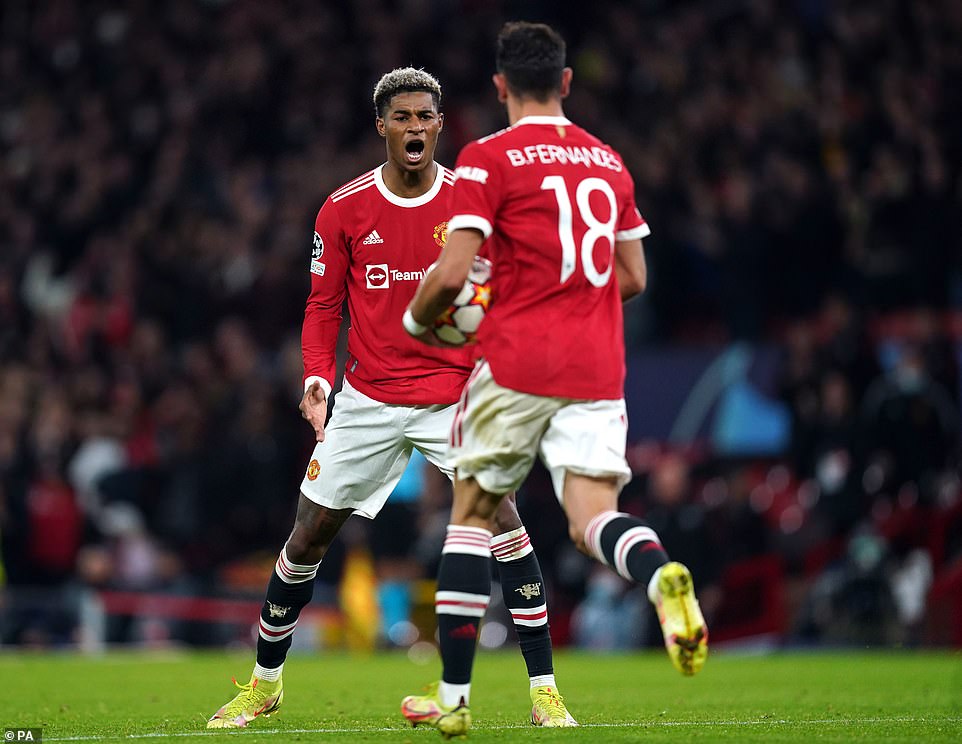 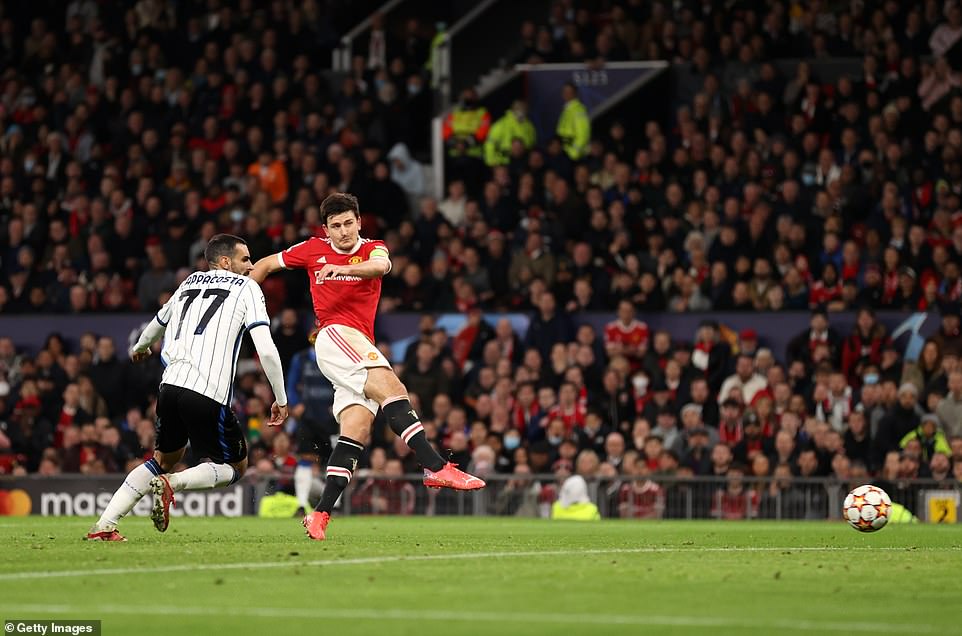 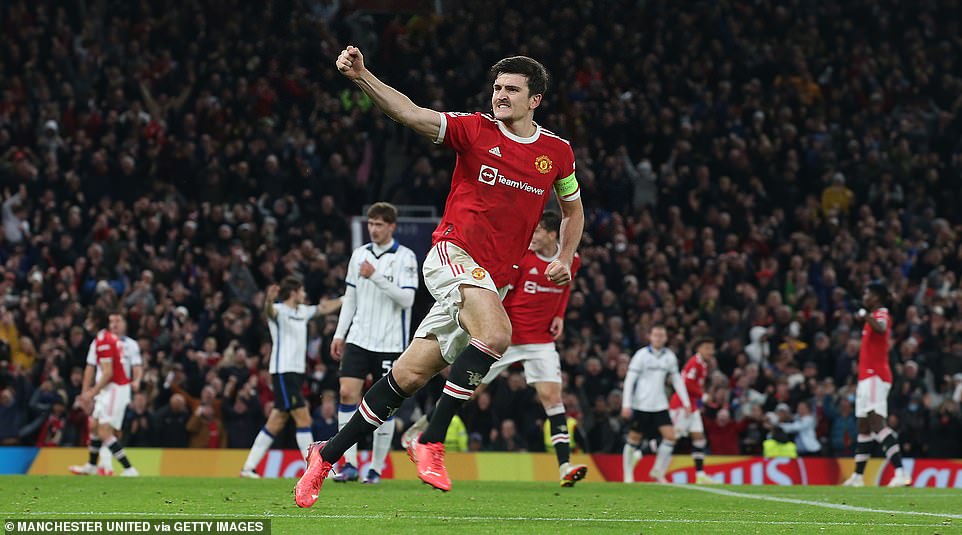 Harry Maguire stayed up after a corner was cleared and was rewarded when Cavani ducked under Fernandes’ cross, confounding Atalanta’s defence and finding the captain unmarked to equalise. The finish was smart indeed. Good feet for a big man, as the saying goes.

Yet before the winner, more drama. David de Gea still comes to United’s rescue, even on nights like this, and in the 71st minute he made a brilliant double save from two Atalanta substitutes, first Duvan Zapata and then the follow-up from Ruslan Malinovskyi.

The danger passed, the winner came 10 minutes later from, well, who else? Another set-piece recycled, this time a very sweet cross from Luke Shaw was met by Ronaldo, rising higher than anyone in the box to power the ball home before a rapturous Stretford End.

Moments like this were why he came here. One imagines, however, he didn’t envisage having to do so much of the work himself. At the end of the game he fell to his knees, fists clenched and screaming with joy. Never let it be said he is just picking up a cheque.

The irony, once again, was that here was another close shave for United against a team they and their Super League colleagues did not think worthy of elite European competition when they hatched their plot last season.

Indeed, Atalanta were singled out by Juventus owner Gianni Agnelli as being imposters in the Champions League, taking the place of more suitable rivals, like Roma. Roma, for the record, can currently be found in the UEFA Conference League.

As for Atalanta, leading by two goals at half time, it cannot even be said they needed to play exceptionally well to get in front.

Certainly, coach Gian Piero Gasperini appeared to be under the impression they were stinking the place out, judging by the way he was acting on the touchline.

Every misplaced pass, every inch of space unwisely afforded, sent him spinning back towards his own bench in fury, remonstrating with his backroom staff or merely searching for agreement that this truly was the most inadequate shower it had ever been his misfortune to marshal.

It’s fair to say he is hard to please; or maybe clairvoyant. The odd error aside, for the first 45 minutes, Atalanta were excellent in containing United and every time they attacked they looked like scoring. This, it must be said, was as much United’s doing as theirs. For a club that has spent an awful lot of money on defence, what the hell is going on back there?

Here’s a worrying thing. The goal that gave Atalanta the lead looked eerily familiar to the three Roberto Firmino put past Watford last Saturday; and Firmino and Liverpool are due here in four days’ time.

It was a good goal, quick and well-taken, but United were dozing. McTominay failed to pick up Davide Zappacosta’s overlap on the right and Mario Pasalic was alert to the threat in a way United’s central defenders were not.

He converted having got to the ball first towards the near post. A textbook counter-attacking move, made potent by textbook lackadaisical defending from United. 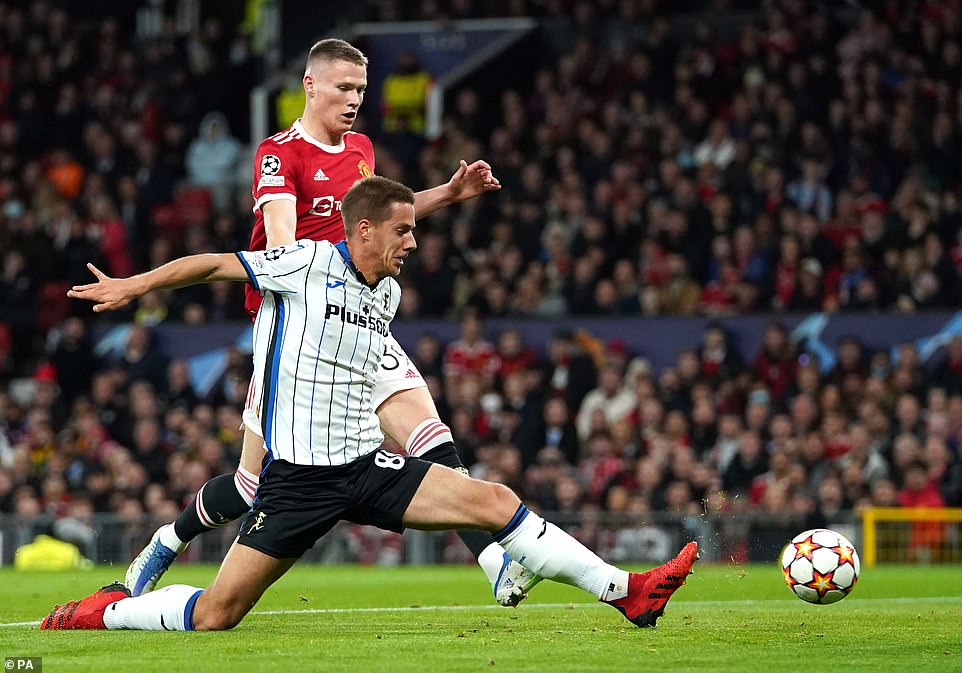 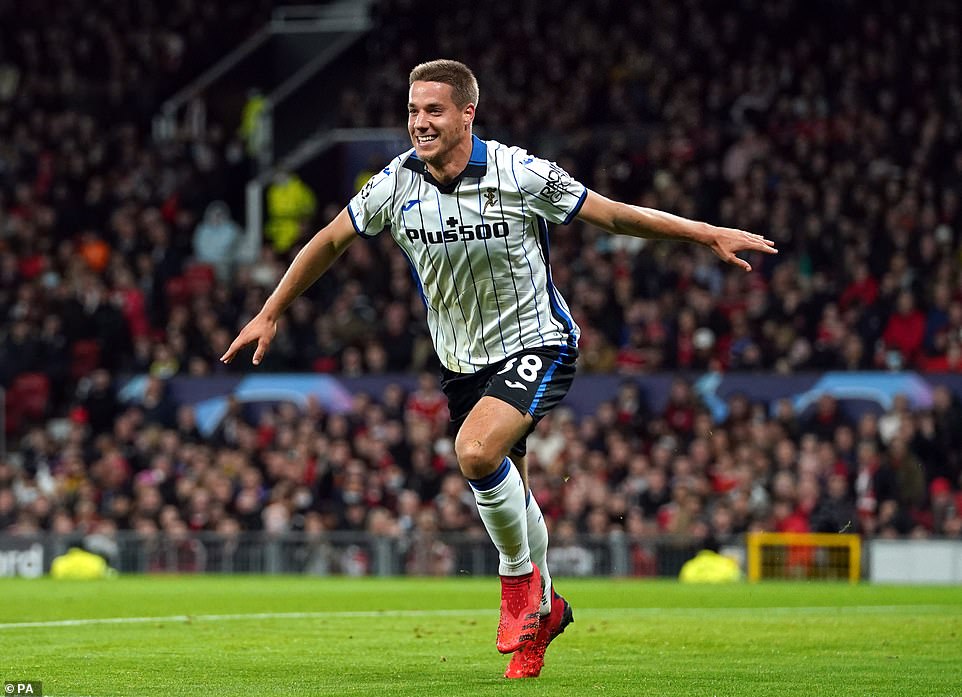 If anything, the second was worse. A straightforward set-piece from a right-sided corner. Ole Gunnar Solskjaer has talked of not conceding goals this way, but this was going into the net from the moment it swung in off the boot of Teun Koopmeiners – whose deflected shot won the corner initially. It sounds a simplification but sometimes it really is about wanting it more.

Not anymore. But do not forget this is not a group that contains a Juventus, like Chelsea’s, or a Paris Saint-Germain, like Manchester City’s. It does not contain Atletico Madrid or AC Milan like Liverpool’s either. United have a few cussed opponents but none that boast a squad of their strength.

Yet they are in a toe-to-toe scrap here; and we’re a long way from the bell. 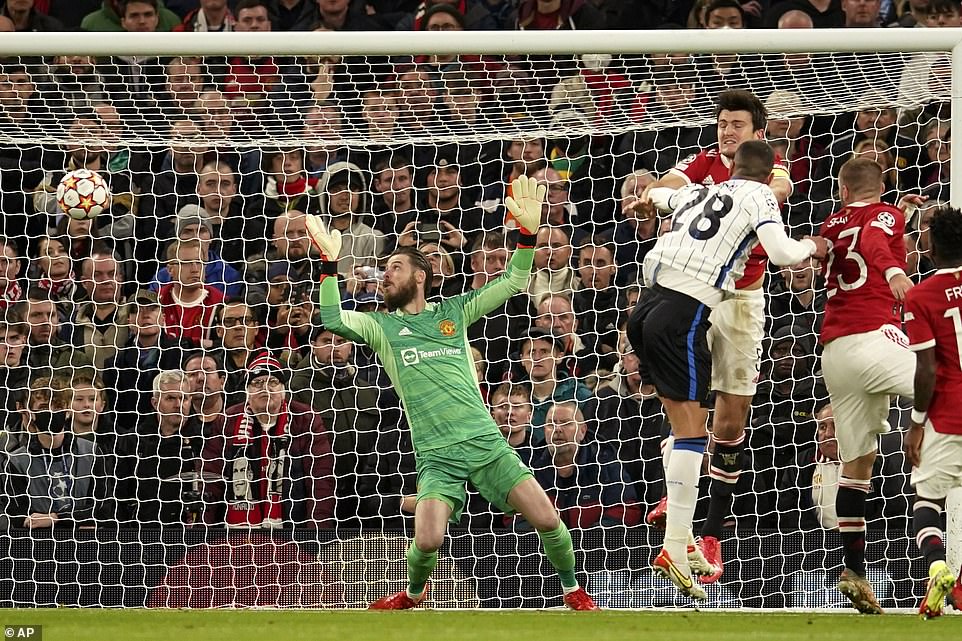 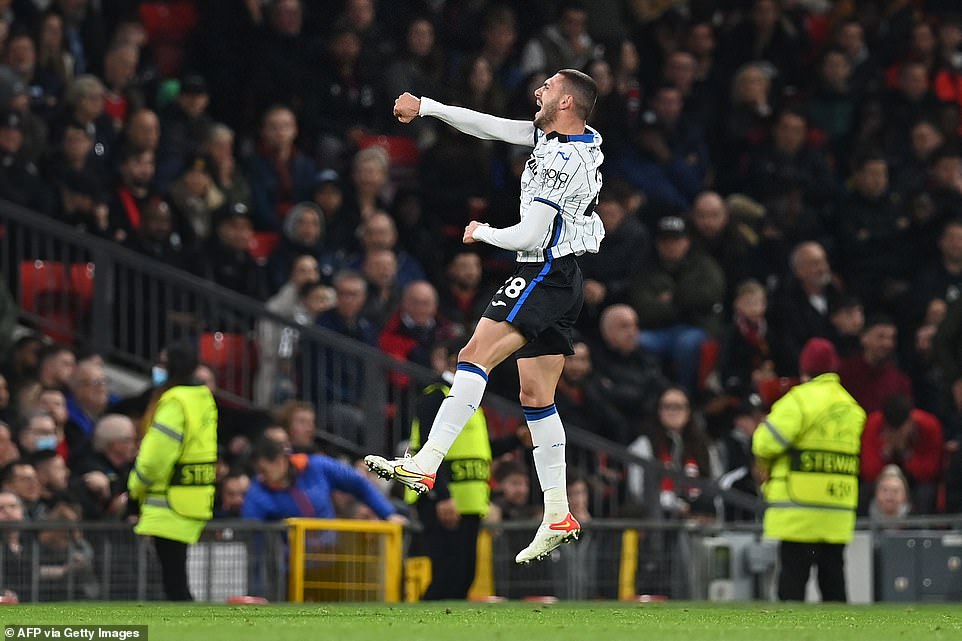 Thanks for joining us tonight in what was a crazy game at Old Trafford!

Stay tuned with Sportsmail today for  the Europa League action.