Cristiano Ronaldo is receiving a thunderous reception in his first few days in Saudi Arabia, but not the type that he would’ve expected

The self proclaimed GOAT has landed in Riyadh amid some of the worst weather the Saudi capital ever experienced for decades and was forced delay his debut as he served the first match of a two-game ban imposed by the FA in November.

His stormy departure from Manchester United and his arrival in Arabia has been marked with torrential rain, thunder and lightning which forced his debut to be cancelled last night and rescheduled for Friday. 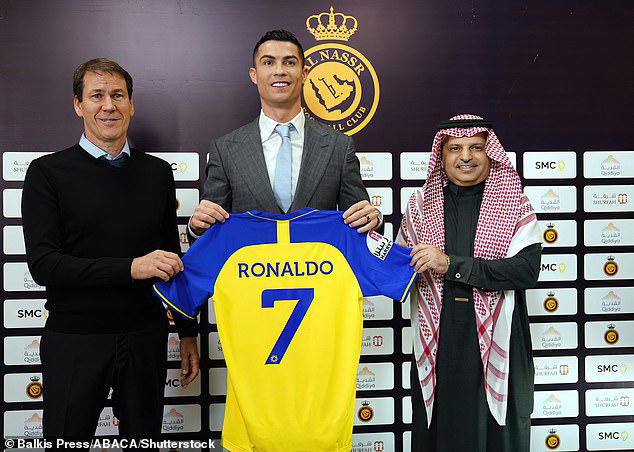 But after another day of heavy rain Al-Nassr announced the match with against Al Ta’ee at Mrsool Park would go ahead.

Ground keepers worked with squeegees and pitch forks to try and clear the swamp like water from the pitch 90 minutes before kick off in a largely empty ground.

Stewards wearing blue coloured plastic ponchos sheltered from the driving rain as officials inside prepared to reveal whether their showboating Portugal star would flout the ban.

Ronaldo arrived at Mrsool Park with his team mates in a track suit and negotiated the ankle deep puddles as entered the stadium 90 minutes before the scheduled kick-off. His image has been given pride of place next to a giant screen and opposite the executive box for all to see. 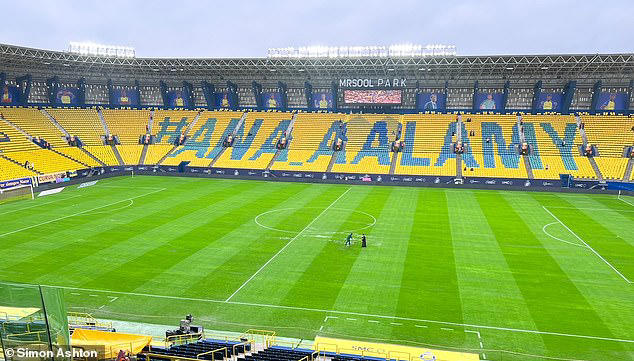 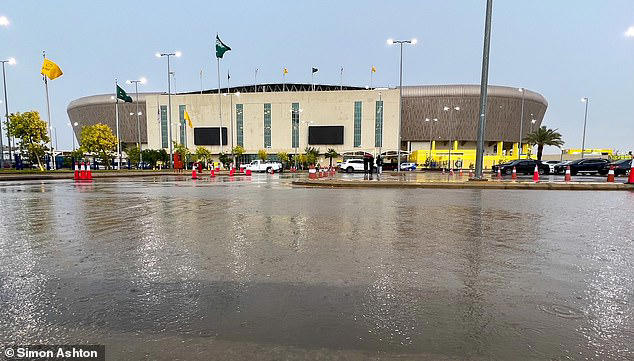 Ronaldo’s picture shows him wearing his new club shirt, and both his fists raised showing off his biceps.

The Portuguese’s first appearance with the Saudi club was postponed on Thursday, when his new club was ground beset by electrical issues as the torrential rain pounded the Saudi Arabian capital.

Ronaldo’s anticipated debut was cast into doubt because he is yet to serve a two-game ban he received by the FA at the end of last year for slapping a phone out of the hand of an Everton fan during a game last season.

Al-Nassr were considering playing the Portuguese superstar in defiance of the suspension, willing to pay any fine handed to them by world governing body FIFA. 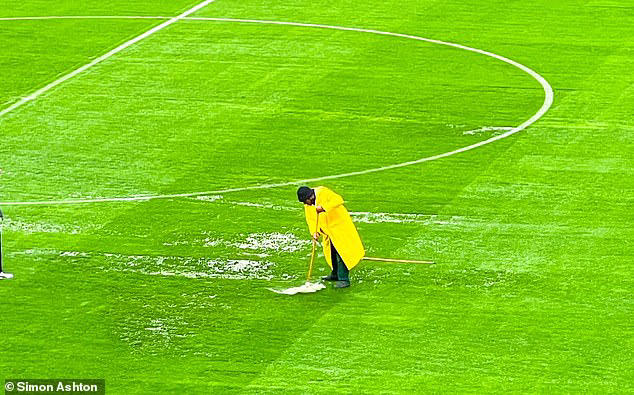 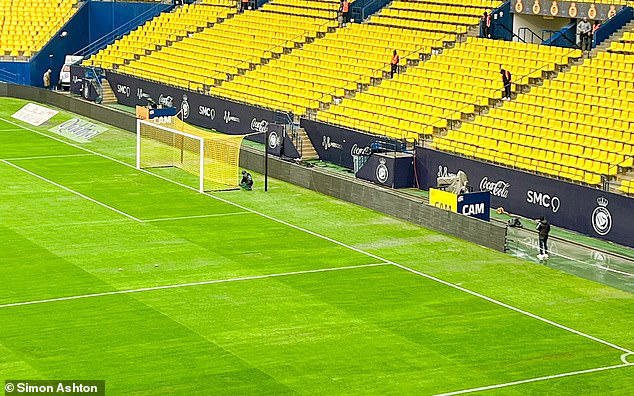 Despite the torrential rain, Al-Nassr’s clash with Al Ta’ee at Mrsool Park will go ahead© Provided by Daily Mail 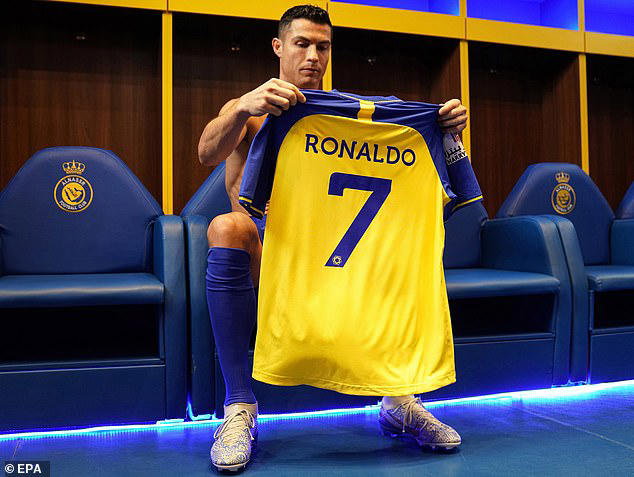 Ronaldo was hit with a £50,000 fine and a two-game ban in November for slapping the phone from the hand of a 14-year-old autistic boy as he walked off the field at Goodison Park on April 9 following Manchester United’s 1-0 loss to Everton.

Sportsmail revealed earlier this week that just before the match was postponed on Thursday Al-Nassr had still not confirmed it would accept the ban which is backed by FIFA rules.

Ronaldo’s international clearance certificate, however, was said to have been received by the club and its executives were examining whether it might help them circumnavigate the banning order.

With no categorical denial that the ban might be flouted, it was believed Al-Nassr were still hoping he would pull on its yellow shirt and make his debut in the Saudi Pro League in front of a sell-out crowd.

Ignoring the ban, however, could have landed Ronaldo in further hot water and see the club hit with a huge fine. 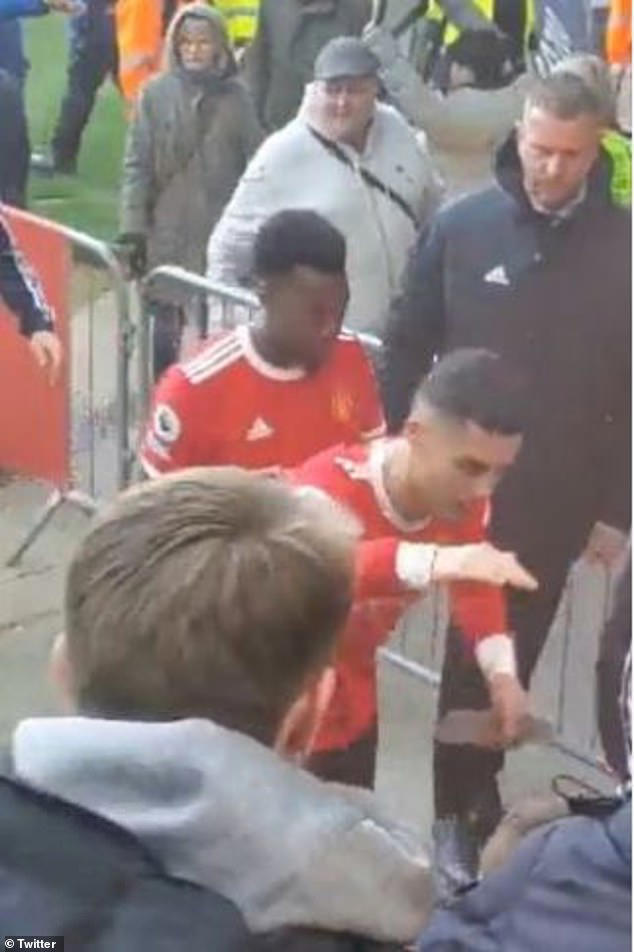 On Thursday it emerged that the Saudis will face difficulties fielding Ronaldo anyway, with the club being unable to register the star having surpassed their foreign player quota.

The five-time Ballon d’Or winner is Al-Nassr’s ninth import from overseas and club sources told AFP negotiations are ongoing to sell a current squad member to meet the limit of eight set by the Saudi Pro League.

‘Al Nassr has not registered him yet because there is no vacancy for a foreign player,’ an unnamed Al Nassr official told AFP.

‘A foreign player must leave to register Ronaldo, either by selling or by terminating the contract by mutual consent.’

Source:Story by Shekar Bhatia For Mailonline