Pele has thanks Kylian Mbappe for his support after the France international urged his followers to pray for the stricken football icon.

Pele, 82, is battling cancer and was admitted to a hospital in Sao Paulo, Brazil in November amid reports he is beginning end-of-life care after not responding to chemotherapy. The three-time World Cup winner has urged fans to stay “calm and positive”.

Doctors at Pele’s hospital have confirmed the ex-footballer’s condition is improving and he is stable. The former Brazil international has received well wishes from millions of football fans in recent days, with Mbappe tweeting “Pray for the King” last Saturday.

In a positive sign, Pele responded to Mbappe’s tweet on Thursday evening. He wrote: “Thank you, Kylian. I’m happy to see you breaking another one of my records in this [World] Cup, my friend!”

Pele was quick to reassure fans of his condition when worrying reports emerged earlier this month. He wrote on Instagram : “My friends, I want to keep everyone calm and positive. I’m strong, with a lot of hope and I follow my treatment as usual.

“I want to thank the entire medical and nursing team for all the care I have received. I have a lot of faith in God and every message of love I receive from you all over the world keeps me full of energy. And watching Brazil in the World Cup too! Thank you so much for everything.” 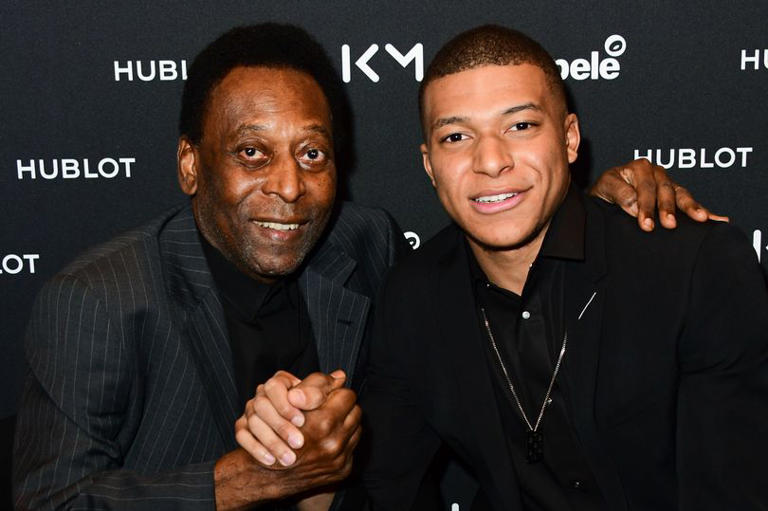 Pele and Kylian Mbappe pictured together in 2019© Getty Images

Doctors then reassured fans further by releasing a statement on Tuesday. It read: “The patient continues to show progressive improvement in his general condition, in particular the respiratory infection. He remains in a standard room, with stable vital signs, conscious and with no new complications.”

Pele is regarded as one of the greatest footballers of all time after winning 1958, 1962 and 1970 World Cups with Brazil. He is the only men’s player in history to be a three-time world champion and remains his country’s leading scorer with 77 goals in 92 caps.

Pele scored more than 1,000 goals and won plenty of trophies for Brazilian side Santos, where he spent the majority of his career. He won six Brazilian league titles and the Copa Libertadores twice before finishing his playing days with American side New York Cosmos.

Since hanging up his boots in 1977, Pele has become a global ambassador for football. His health has deteriorated in recent months, as he underwent surgery to remove a tumour in his colon in September 2021 before starting chemotherapy.

Mbappe, 23, has drawn comparisons with Pele. He became the first teenager since Pele to score in a World Cup final when France defeated Croatia 4-2 in Russia four years ago. Pele famously achieved the feat in Brazil’s 5-2 win against Sweden in 1958.

Mbappe broke Pele’s record for the most World Cup goals scored by a player aged under 24 when he scored a brace in the 3-0 win against Poland, taking his tally to nine. England will be hoping he doesn’t add to it when they meet France in Saturday’s quarter-final.