Who will host 2030 FIFA World Cup? Bids from Africa, South America, and Europe in the running, including Ukraine

The 2022 FIFA World Cup is still going on, but planning is already underway for 2030, which will mark the centennial edition of the tournament. 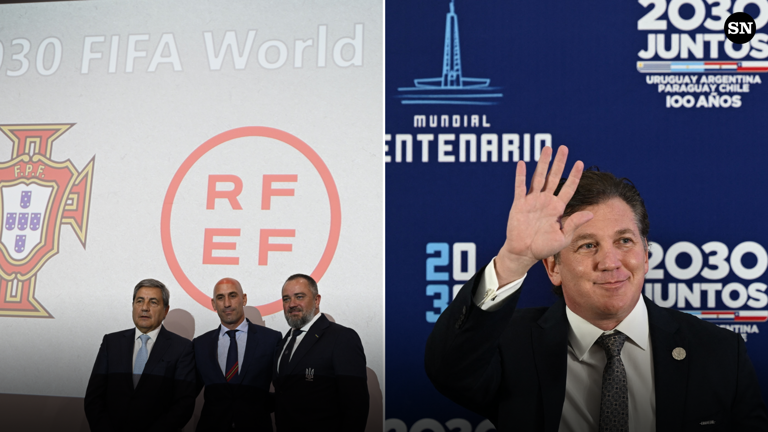 Who will host 2030 FIFA World Cup? Bids from Africa, South America, and Europe in the running, including Ukraine© Provided by Sporting News

Several nations have already expressed their interest in serving as 2030 host and the vetting process by FIFA will be held over two years before a final decision is made in 2024, six years before the event.

Beginning in 2026, the World Cup will be expanded to a 48-team tournament, likely requiring future hosts to team up in order to host an event of that magnitude. There have been only two joint bids in the history of the men’s World Cup, but several multi-nation proposals are already being formulated for 2030.

The first men’s World Cup tournament was held in 1930 and it has been held every four years except for 1942 and 1946 due to World War II. The 2030 competition would be the 24th edition unless world governing body FIFA succeeds in making it a biennial event.

The bidding process was officially launched in the second quarter of 2022, and FIFA announced that a host will be chosen at the 74th FIFA Congress in 2024.

This means that the selected host will have six years to prepare for the 2030 tournament.

However, it’s possible that the selection will be done earlier, as was at one point considered with the 2026 World Cup. In that case, the united bid of USA, Canada, and Mexico requested an expedited bidding process with no rival bid having been submitted at the time. However, FIFA refused this request, and ultimately Morocco came forth with a competing bid.

Spain and Portugal became the second official bid for the 2030 FIFA World Cup after their October 2020 announcement.

Known as the “Iberian Bid” in reference to the Iberian Peninsula on which these two nations lie, it is the second time they are bidding together for a World Cup, having been unsuccessful with a bid to host in either 2018 or 2022.

In early October 2022, it was announced that Ukraine would be joining their bid, with Ukraine looking to host one group. With the new 48-team expansion, that means Ukraine would host three nations contesting three group stage matches.

Spain would serve as the main hosts for this tournament, with 11 Spanish venues to be selected from a 15-stadium shortlist. Meanwhile, three Portuguese stadiums would be included, and an unknown number of Ukraine venues selected, although likely only one will be required to host the small number of matches contemplated.

Ukraine, currently at war with Russia, is an interesting addition to the European bid for the 2030 FIFA World Cup. With the 2030 tournament still eight years away, it’s hard to imagine this conflict lasting that long, but it will still take years to prepare for the tournament, and it’s unclear what Ukraine’s capacity to do so will be in the next few years.

Still, with such a small number of matches to take charge of, their addition to the European bid could prove a valuable pull on the heartstrings of FIFA member nations, but also a tug at the wallets as they look to appeal to the emotions of viewing fans around the world.

Multiple reports state the bid has received the backing of Ukraine president Volodymyr Zelenskiy, who has become a popular and sympathetic figure worldwide as he looks to fend off the Russian invasion in the eastern portion of Ukraine.

However, not everyone has fallen in love with the new addition with some accusing the European bid of political posturing. Also, with Ukraine tabbed to host so few matches, it’s curious that the country should even be included at all. In the 2026 World Cup to be hosted by the United States, Mexico, and Canada, each nation will be hosting at least 10 matches each. For Ukraine to receive just three matches does raise questions about the necessity of the Eastern European nation’s involvement.

Additionally, the Iberian nations of Spain and Portugal are nowhere near Ukraine geographically. Most joint bids typically involve countries that are geographically close together to leave the concept of a “host” intact even across borders. Competitive considerations are sure to come into play for teams required to travel from Ukraine for their matches.

The European bid did address this concerns in their statement. “Our bid is not an Iberian bid anymore, it’s a European bid,” Spanish RFEF president Luis Rubiales said at a news conference at the Swiss headquarters of UEFA upon the announcement of Ukraine’s involvement.

“I’m convinced that now our bid is much better than before. Football is universal and if it is capable of changing the life of people in so many ways it should also be used for doing good.”

The very first bid officially proposed to FIFA for the 2030 World Cup was a joint South American bid between Uruguay and Argentina, which was announced in July 2017.

The biggest draw for this bid is that Uruguay hosted the very first World Cup in 1930, and on the 100th anniversary of the first FIFA tournament, it will no doubt be very enticing to hold the monumental tournament in the place where it all began.

Months after the official announcement of the bid, Paraguay joined as a third host, while Chile was accepted as part of the bid in 2019. It is the first ever four-nation bid to host a World Cup.

Three of the four nations included in this bid have already hosted a World Cup previously. Uruguay hosted the first World Cup in 1930, while Chile was the site of the 1962 World Cup, and Argentina played host in 1978. Paraguay is the only nation from the group that has not previously hosted a World Cup, although they have held one FIFA tournament before: the 2019 FIFA Beach Soccer World Cup.

Only one African nation has previously hosted the FIFA World Cup, with South Africa awarded the 2010 tournament.

The Moroccan bid for the 2026 tournament, which materialized late in the process, included an intention to spend $16 billion on tournament preparation, including infrastructure, facilities, hospitality, and venues.

If a proposed joint bid between Saudi Arabia and Egypt fails to materialize, it’s possible that Egypt could join this bid jointly before the process is complete and voting is conducted. Algeria and Tunisia have also been mentioned as possible additions in the future.

One bid gaining steam is a cross-continental bid involving Saudi Arabia and Egypt. Official FIFA rules regarding continental rotation state that the Asian confederation, to which Saudi Arabia belongs, is ineligible to host after Qatar was awarded the 2022 World Cup, but they could potentially get around that by including a nation from another eligible continent. Greece is also thought to be under consideration to join this bid.

There’s another second potential coalition bid involving Bulgaria, Romania, Greece and Serbia, but despite the nations’ stated interest in working together, it is not clear whether this will go through and compete with Spain-Portugal-Ukraine. This bid seems to be losing ground with UEFA heavily backing the Iberian Bid.

Those are Europe’s only options after the UK and the Republic of Ireland withdrew its bid, instead focusing on hosting the 2028 Euros, citing a better chance of landing the rights to the European Championship.

MORE: Which countries have qualified to Qatar 2022?

Europe has hosted 11 of the 23 tournaments, while South America has welcomed five editions. The remaining seven World Cup competitions are split between North America (4), Asia (2) and Africa (1).