Being gay is ‘damage in the mind’, Qatar World Cup ambassador says

An ambassador for the World Cup in Qatar has described homosexuality as “damage in the mind”. 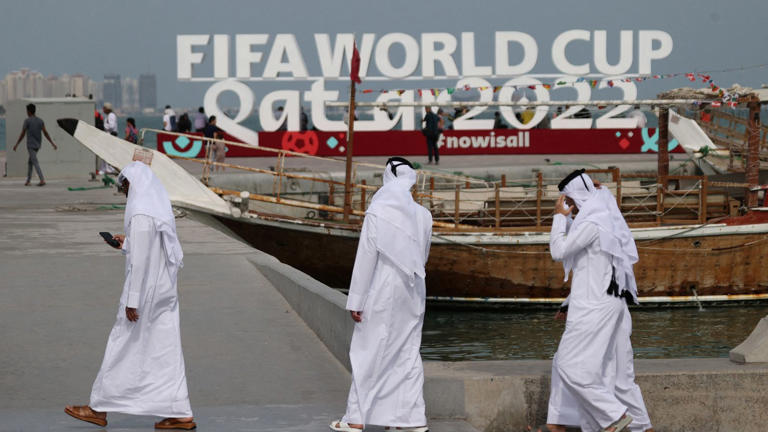 Being gay is ‘damage in the mind’, Qatar World Cup ambassador says© Reuters

Two weeks before the football tournament begins in the Gulf state, former Qatari footballer Khalid Salman told a German public broadcaster being gay is “haram”, or forbidden in Arabic.

In excerpts of the television interview shown on ZDF’s news programme Heute Journal, Mr Salman said he has a problem with children seeing gay people.

Mr Salman went on to say homosexuality “is spiritual harm”.

“During the World Cup, many things will come here to the country. Let’s talk about gays,” Mr Salman said in English, which was simultaneously dubbed into German in the TV segment.

“The most important thing is, everybody will accept that they come here. But they will have to accept our rules,” he added.

When asked why it was haram, Mr Salman said: “I am not a strict Muslim but why is it haram? Because it is damage in the mind.”

The interview was immediately cut short by a press officer of the World Cup organising committee after Mr Salman described being gay as “damage in the mind”, ZDF reported.

Around 1.2 million international visitors are expected in Qatar for the month-long tournament, which has been criticised ever since the gas-rich emirate was selected as host by Fifa in December 2010.

There have been concerns about the conservative country’s treatment of homosexuals living in the country as well as LGBTQ tourists attending the World Cup.

World Cup organisers did not immediately respond to Sky News’ request for comment.

Labour’s shadow sports minister Jeff Smith said the onus was now on the World Cup organisers to condemn the comments.

“They need to say this person doesn’t represent us, doesn’t represent the ethos and the manner in which the World Cup is meant to be run, and say LGBT people, along with all other people, are welcome,” he told BBC Radio 4’s World at One.

Robbie de Santos from LGBT group Stonewall said he was surprised but not shocked by the views.

“It is shocking to hear such comments in the run up to what should be an absolutely joyous, inclusive, global celebration. Such a divisive comment is just really, really hard to hear,” he said.

“I think that the tournament is going to happen, people are going to watch it, but it is going to be really uneasy for so many people to watch a tournament which has just been mired in so much controversy.”

There have been calls for people to boycott the World Cup due to Qatar’s stance on gay rights.

Opposition leader Sir Keir Starmer has said he and his Labour colleagues will not attend.

Foreign Secretary James Cleverly was accused of being “shockingly tone-deaf” last month after he urged LGBT football fans to be “respectful” of Qatar if they visit the country for the World Cup.

“Preaching from a distance is not a solution,” said Sheikh Mohammed bin Abdulrahman al Thani.

“Calling to boycott the World Cup, or those who are not coming to the World Cup, it’s their decision at the end of the day, but why deprive the people and the public from attending and enjoying the World Cup.”

It comes after a Human Rights Watch (HRW) report claimed security forces in Qatar have been arbitrarily arresting and abusing LGBT Qataris recently.

HRW said it had interviewed six LGBT Qataris, including four transgender women, one bisexual woman and one gay man, who reported being detained between 2019 and 2022.

They said they had been detained without charge in an underground prison in Doha and subjected to verbal and physical abuse, including kicking and punching.

One individual said they were held for two months in solitary confinement.