Britain’s new monarch King Charles III is set to address the nation on Friday following the death of his mother, Queen Elizabeth II.

The King will pay tribute to the Queen and pledge his duty to his service as the new sovereign in the televised speech.

As the nation began at least 10 days of official mourning, King Charles and his wife Camilla were set to travel to London from Balmoral, where Her Majesty “peacefully” passed away on Thursday afternoon.

He was expected to meet new Prime Minister Liz Truss, while MPs will pay tribute to the Queen in a day-long House of Commons sitting.

The sombre tributes come as the nation and world reflects on the life and legacy of Britain’s longest-reigning monarch. Elizabeth II, 96, served as head of state for more than 70 years.

Her death was announced by Buckingham Palace in a statement released at 6.30pm. “The Queen died peacefully at Balmoral this afternoon. The King and The Queen Consort will remain at Balmoral this evening and will return to London tomorrow,” it said.

The flag at the Palace was lowered to half mast as the announcement was made. 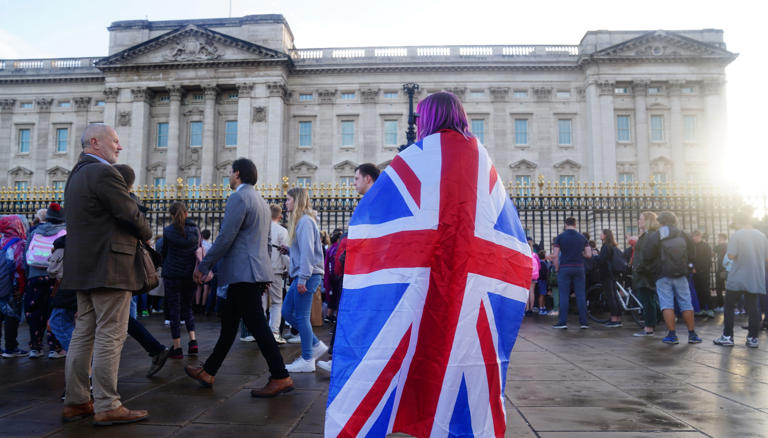 Charles, who became King on the death of his mother, issued a statement describing the death of “my beloved Mother, Her Majesty The Queen” as a “moment of the greatest sadness for me and all members of my family”.

“We mourn profoundly the passing of a cherished Sovereign and a much-loved Mother. I know her loss will be deeply felt throughout the country, the Realms and the Commonwealth, and by countless people around the world.

“During this period of mourning and change, my family and I will be comforted and sustained by our knowledge of the respect and deep affection in which The Queen was so widely held,” he said.

It is understood that Charles — who became the monarch the moment the Queen died under the common law rule Rex Nunquam Moritur — travelled from Dumfries House by helicopter to be with his mother at Balmoral before her passing.

Prime Minister Liz Truss, dressed in black, addressed the nation outside No 10 shortly after 7pm.

She said: “We are all devastated by the news that we have just heard from Balmoral.

“The death of Her Majesty the Queen is a huge shock to the nation and to the world.”

The new prime minister referred to Charles, the new King, as King Charles III, saying: “Today the Crown passes, as it has done for more than a thousand years, to our new monarch, our new head of state, his majesty King Charles III.”

Ms Truss said it was “the passing of the second Elizabethan age” and concluded her address by saying “God save the King”.

Labour leader Sir Keir Starmer described the Queen as a “remarkable sovereign”, adding: “It is a deep, private loss for the royal family and all our thoughts are with them at this time. The nation shares in their grief. 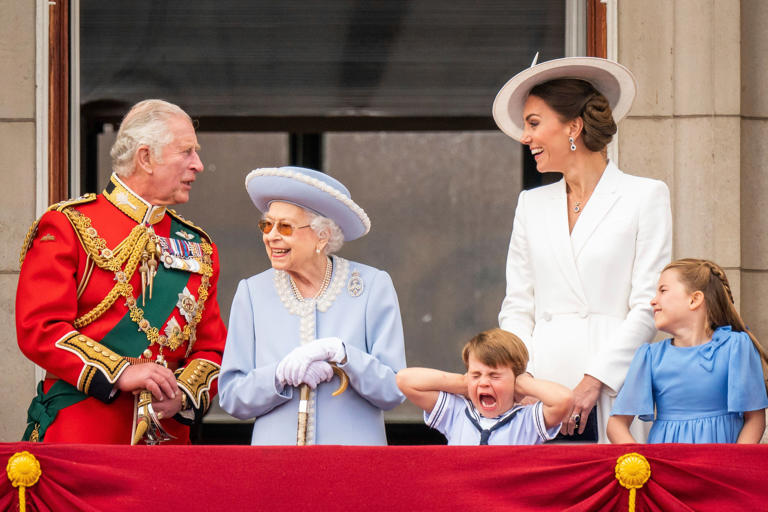 “We will always treasure Queen Elizabeth II’s life of service and devotion to our nation and the Commonwealth; our longest-serving and greatest monarch.”

The House of Commons will sit at noon for MPs to pay tribute to the Queen in a session due to last until 10pm.

There will also be a rare Saturday sitting, where senior MPs will take the oath to King Charles III from 2pm, with tributes continuing again until 10pm.

Paying his own tribute to the Queen on Thursday, former prime minister Boris Johnson spoke of “our country’s saddest day”.

He added: “In the hearts of every one of us there is an ache at the passing of our Queen, a deep and personal sense of loss – far more intense, perhaps, than we expected.

“In these first grim moments since the news, I know that millions and millions of people have been pausing whatever they have been doing, to think about Queen Elizabeth, about the bright and shining light that has finally gone out.” 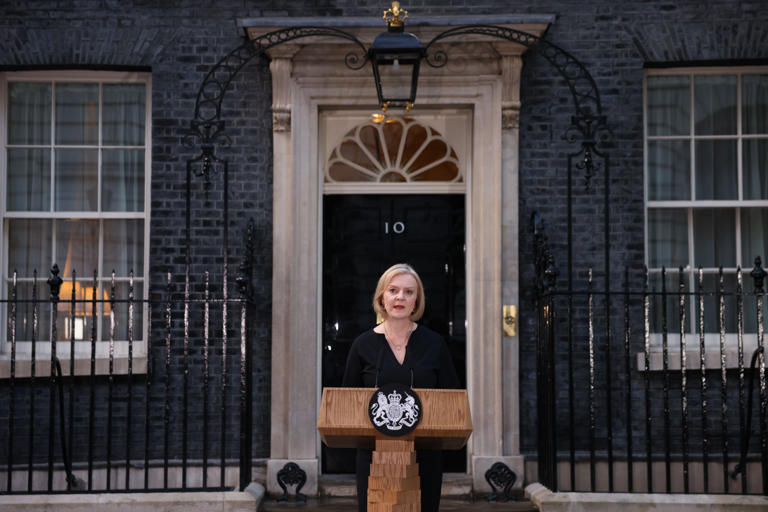 Commons Speaker Sir Lindsay Hoyle said the Queen’s death is a “terrible loss for us all”, adding: “We will miss her beyond measure.”

Leaders from around the world expressed their grief and sadness at the Queen’s passing.

US President Joe Biden said Her Majesty “was more than a monarch. She defined an era”.

“In a world of constant change, she was a steadying presence and a source of comfort and pride for generations of Britons, including many who have never known their country without her,” he added.

French president Emmanuel Macron tweeted: “Her Majesty Queen Elizabeth II embodied the British nation’s continuity and unity for over 70 years. I remember her as a friend of France, a kind-hearted queen who has left a lasting impression on her country and her century.”

She tweeted: “It is with deep sadness that I have learned of the passing of Her Majesty Queen Elizabeth II.

“She was the world’s longest-serving head of state and one of the most respected personalities worldwide. I offer my heartfelt condolences to the royal family and the British people.”

Ukraine’s President Volodymyr Zelensky tweeted: “It is with deep sadness that we learned of the death of Her Majesty Queen Elizabeth II.

“On behalf of the people, we extend sincere condolences to the @RoyalFamily, the entire United Kingdom and the Commonwealth over this irreparable loss. Our thoughts and prayers are with you.”

Cardinal Vincent Nichols, Archbishop of Westminster and President of the Catholic Bishops. Conference of England and Wales, paid tribute to the Queen as a “shining light in our history”.

Hundreds of mourners gathered in the darkness outside a rain-soaked Buckingham Palace to pay their respects, the wrought iron palace gates brightened by dozens of colourful bouquets laid by mourners.

Several left notes, including one reading: “We had you for longer than we deserved you”.

Elizabeth II, who reigned since February 6, 1952, marked her seven decades with this summer’s platinum jubilee celebrations.

The Queen mourned the loss of her beloved husband of 73 years, the Duke of Edinburgh, who died aged 99 in April 2021.

A figure of stability in national life, the Queen was head of state, the armed forces, the Commonwealth and the Church of England.

The majority of the population has known no other monarch. 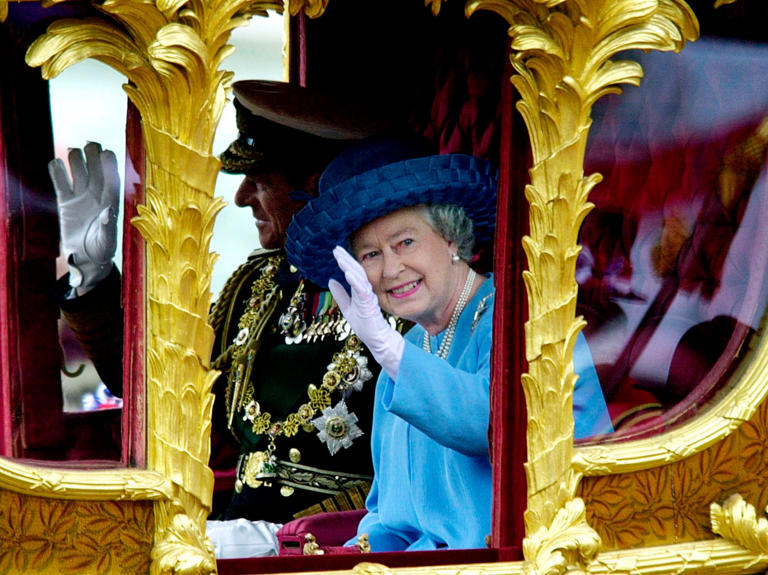 Queen Elizabeth II accompanied by her husband the Duke of Edinburgh wave to wellwishers in the State Gold Coach from Buckingham Palace to St Paul’s Cathedral for a service of thanksgiving to celebrate her Golden Jubilee in June 4, 2002 (AP)© Provided by Evening Standard

The death of the Queen now means Operation Unicorn — the plan dictating what happen should the Queen die in Scotland — is operational.

It is understood that parliamentary business will be suspended immediately for preparations for the Queen’s state funeral to start. Thousands are expected to make their way to Edinburgh to pay their respects, where they would be encouraged to gather around the Scottish Parliament, Holyrood Palace and St Giles’ Cathedral — all on Edinburgh’s Royal Mile.

As it stands the Queen’s body would initially rest at the Palace of Holyrood before her coffin is carried to St Giles’. Her body would then be placed on a royal train at Waverley station before travelling down the East Coast mainline to London. Operation London Bridge — the main plan for the Queen’s death — will run in parallel.

Books of condolence will be opened around the country and gun salutes will take place at saluting stations and a service of remembrance will be held at St Paul’s Cathedral. Five days after the Queen’s death the coffin will go to Westminster Hall and, after a service, lie in state for three days.

The state funeral will be at Westminster Abbey 10 days after her passing, after which her body will be buried at King George VI Memorial Chapel in St George’s Chapel, Windsor, alongside the Duke of Edinburgh. 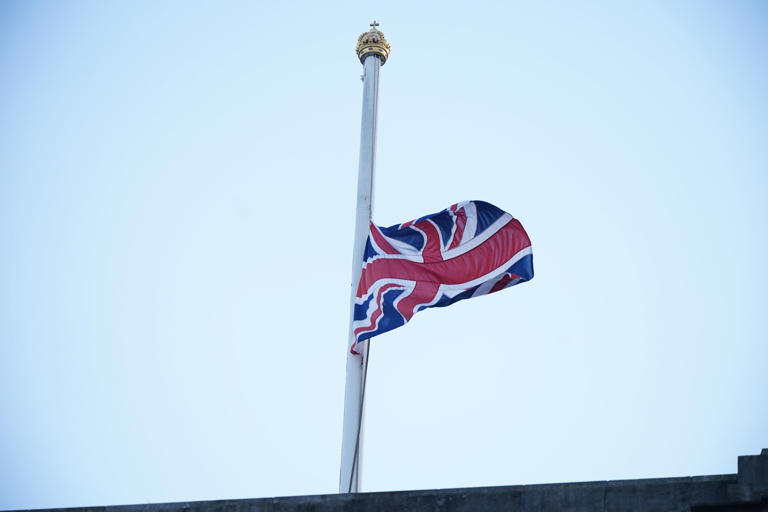 Final arrangements for the Queen’s lying-in-state and funeral must wait on the decisions of the new king.

The Duchess of Cornwall, as Charles’s spouse, automatically becomes Queen Consort. The Duke of Cambridge becomes heir to the throne and adds the Duke of Cornwall to his titles but does not become Prince of Wales.

Charles is expected to bestow the title on his eldest son William soon, but strictly speaking it must be gifted by the sovereign.

The Queen made Charles the Prince of Wales on July 26, 1958, six years after he became heir apparent. He had to wait another 11 years for his investiture, on July 1, 1969.

Her Majesty’s four children – Princes Charles, Andrew and Edward, and Anne, Princess Royal, had travelled to Balmoral earlier on Thursday after it emerged her health had taken a serious turn for the worse.

William and Harry also headed to the Scottish estate to be with their grandmother, although the Duke of Sussex arrived more than two hours after her death had been announced. 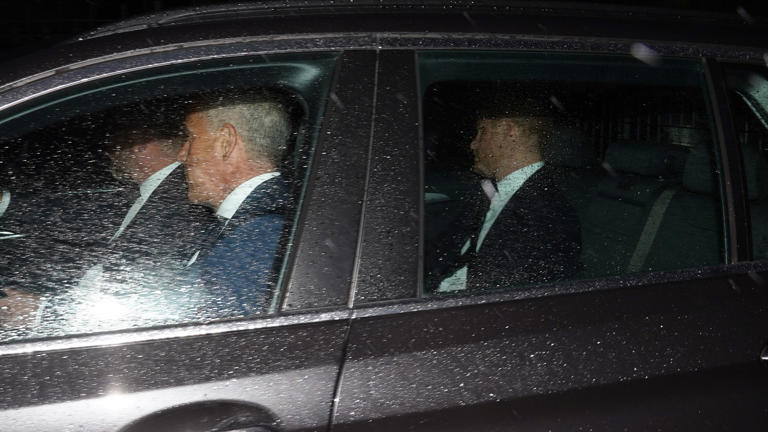 Broadcaster Huw Edwards delivered the news of the Queen’s death live on BBC One.

Edwards then read out the statement from Buckingham Palace which announced the news.

The broadcaster was dressed in a dark suit, white shirt and black tie, in line with the BBC’s dress code for when a member of the royal family dies as a mark of respect.

BBC One played the national anthem following the announcement, showing a photograph of the Queen, followed by a royal crest on a black background and the words Queen Elizabeth II.

As the nation absorbed the news, theatres across the country were dimming their lights and observing a minute’s silence, playing the national anthem and opening books of condolences prior to performances as mark of their respect.

The National Theatre said it was “deeply saddened” by the news of the death of the Queen, who had been a patron of the institution for more than 40 years.

Leading figures from the world of showbiz also paid their respects.

Sir Mick Jagger has said that throughout his whole life the Queen has “always been there” as he recalled watching key moments in her life.

The frontman of The Rolling Stones shared a photo of the monarch on his Instagram and wrote: “For my whole life Her Majesty, Queen Elizabeth II has always been there.

“In my childhood I can recall watching her wedding highlights on TV.

“I remember her as a beautiful young lady, to the much-beloved grandmother of the nation. My deepest sympathies are with the royal family.”

“Today is a very sad day for the entire world,” she tweeted.

Major sporting events were cancelled in the wake of the Queen’s death. Friday’s play in the Test match between England and South Africa was called off, while horse racing was halted.

Register now for one of the Evening Standard’s newsletters. From a daily news briefing to Homes & Property insights, plus lifestyle, going out, offers and more. For the best stories in your inbox, click