Erik ten Hag has admitted Casemiro has got to get used to his style of play before he earns his first Manchester United start after the Brazilian was named on the bench for their clash with Arsenal.

The Red Devils are searching for their fourth successive Premier League win after beating Liverpool, Southampton and Leicester City, and, unsurprisingly, Ten Hag has made just one change to his starting XI. £86million signing Antony has come in for Anthony Elanga, with Jadon Sancho expected to move across to the left-side.

However, the main question mark from his selection is that Casemiro starts as a substitute for the third consecutive game following his £70m arrival from Real Madrid. Scott McTominay has kept his place once again, with Ten Hag sticking with the same midfield with the Scotland international alongside Bruno Fernandes and Christian Eriksen.

When asked about his decision to keep Casemiro on the bench, Ten Hag told Sky Sports: “He is new in the team, he has to adapt to the team. He has to get used to my way of playing football. The other thing, Scott McTominay is playing really well.” 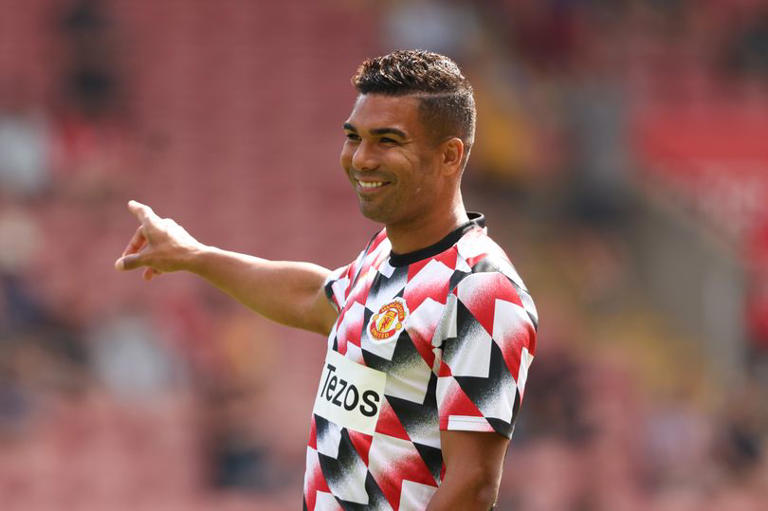 Recommended video: Manchester United boss Erik ten Hag says there is much more to come from Marcus Rashford after his double earned an impressive 3-1 victory over Premier League leaders Arsenal

Meanwhile, Antony became United’s second most expensive signing on deadline day as he joined from Ajax and is set to bring pace and trickery to the Red Devils’ attack. Ten Hag had no doubts about bringing him straight into the side, rather than bedding him in slowly.

Ten Hag added: “He knows the style we want to play and what we expect and demand. He can be an offensive threat with his speed in one on ones.”

Where will Manchester United finish this season? Let us know in the comments below!

United come into the game in a rich vein of form and will be hoping to continue that against the current Premier League leaders. Arsenal are the only side to win every possible game so far this season, having collected 15 points from a possible 15.

When analysing their opponents, he said: “It gives us a bit extra, confidence you get by yourself. The team is winning and has belief of winning game, if we have the (right) attitude, we are hard to beat. Arsenal are a really good football team, if you let them play you have a problem.”

Meanwhile, Mikel Arteta gave a cheeky response to the Sky journalist when asked about how his side can beat United. Arsenal have a retched recent record at Old Trafford, but Arteta will be looking to change those matters quickly.

He said: “We have to score one more goal than the opponent.”