The Telegraph:Follow View Profile Why Emma Raducanu’s US Open defence fell at the first hurdle

Emma Raducanu will no longer be the US Open champion, nor a top 15 player by the end of this fortnight in New York. She could even lose her British No 1 crown too.

She played significantly better on Tuesday than during her run to the second round at Wimbledon earlier this summer, but any chance of a win against 40th-ranked Alize Cornet remained far from her grasp and she came away with nothing to show for her efforts. Here are the reasons why:

Pressure of defending a title

Only one woman other than Serena Williams has won back-to-back titles at the same major in the last 10 years (Victoria Azarenka at the Australian Open in 2012 and 2013). This year Naomi Osaka was the only reigning slam champion who managed to even win a match while defending their title. 2,000 ranking points can weigh heavy on the mind, it appears.

Raducanu’s memories in New York had only been of elation before this week, having never even lost a set. But history has shown the odds of her reliving that miracle here were long. Still, her first ever first-round exit at a major stung, that much was clear from her post-match press conference where she cut an understandably downbeat figure.

But for Raducanu the future without “reigning US Open champion” to prefix her name, could help her to approach her tennis with more freedom.

“It’s a clean slate,” she said. “With perspective, actually as a 19-year-old, I’ve had not a bad year. To be top hundred, if you told me that a year ago, I’d take it. But I think it would be nice in a way to kind of just start over, start fresh.”

.@alizecornet is victorious in Armstrong!

She defeats Raducanu, 6-3, 6-3 to advance to Round 2. pic.twitter.com/RHAd0zCBxv

The list of ailments Raducanu has contended with this season has been long and tiresome, halting her momentum both on the match court and in training. From back stiffness, broken toenails and abdominal strains, she has had a bumpy time trying to condition her body for the demands of WTA tennis.

On Tuesday we saw the return of the blister trouble on her fingers that had a significant impact on her Australian Open fortunes in January – leaving her with only a forehand slice at her disposal in her second-round loss. 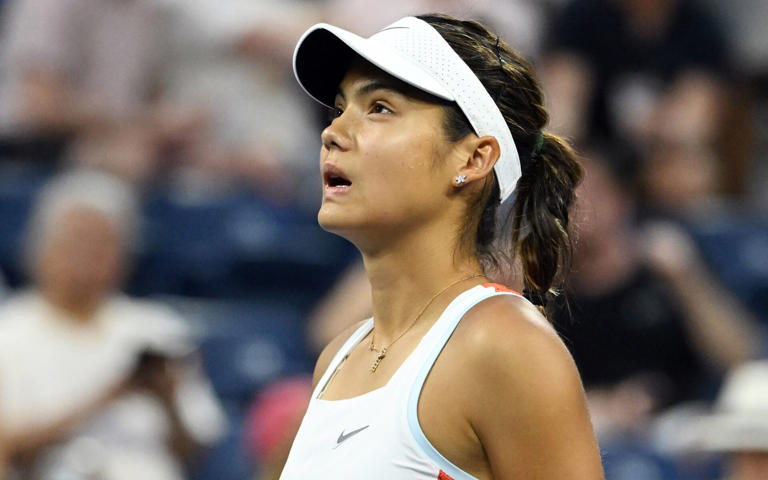 After losing the first set to Cornet in New York the familiar scene of played out, where Raducanu requested a medical timeout and received treatment on her heavily taped fingers on her right hand. Though she played on and did not seem too hampered by it, the recurring physical frailty remains a worrisome sign. 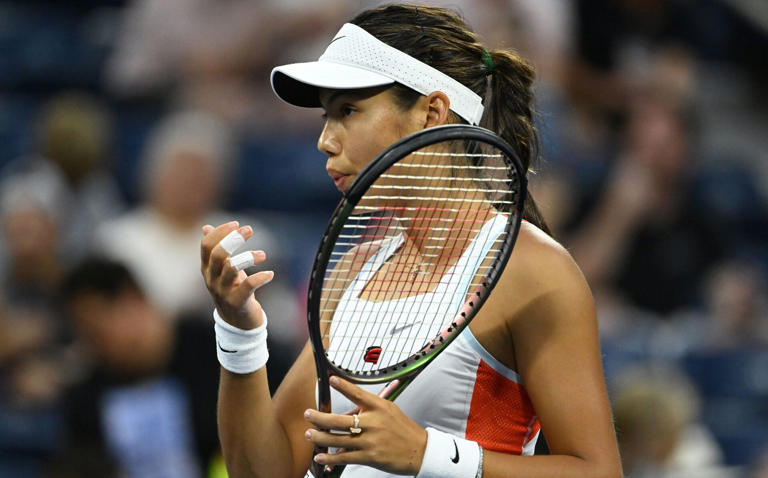 The main issue was holding serve – which Raducanu only managed to do twice in the entire match. It was a shame, considering her serve had looked so effective in Cincinnati a fortnight ago – especially her option out wide – where she scored significant wins over Serena Williams and Victoria Azarenka.

She only made 58 per cent of her first serves on Tuesday, and said she was affected by the windy conditions. “I think it was quite windy. It was blowing, like, from back-to-front,” she said.

“It was quite difficult for me especially to find my ball toss. I think I was hitting quite a lot of serves long. I just struggled to adapt to it really. It’s something that both players have to kind of deal with. She just dealt with it better than me today.”

Conversely, she returned with great aggression from the off and won four of six break points on Cornet’s serve. But that hard work was cancelled out by her own flaky service games. Cornet’s deft drop-shots and clever net play proved pivotal. Once the 32-year-old saw she could catch out the Brit behind the baseline, she began pouncing on Raducanu’s mid-court balls. Cornet won 14 of 16 net points, to Raducanu’s five of 14.

While Raducanu chased down dead-bounce drop shots and helplessly tracked the lobs looping over her head, Cornet was full of confidence, geeing up the crowd and gesturing with her racket as if it were a magic wand.

“Maybe in the future I can look to improve my net game to play players like that,” Raducanu reflected after. “It’s something I haven’t done much of, so not really going to try it out in a match. The occasions I did, she read where I was going and hit a pretty good lob.”

Cornet’s colourful attitude and variety has frazzled some of the best players over her career, including Williams, and at this year’s majors Cornet eliminated champions Simona Halep, Jelena Ostapenko and Iga Swiatek in Melbourne, Paris and Wimbledon respectively.

“This year I’m kind of the upset girl,” she said with a smile after beating Raducanu. “I was like, okay, I did it on the three previous Grand Slams – so why not this one?”

She chipped, whipped and placed balls Raducanu’s way with relentless defending and made smart shot choices on the offensive too. Raducanu in turn felt the pressure, her usually reliable backhand spraying errors and forehand following suit.

“Alize’s defence was pretty good. I thought she was just scrapping everything back,” Raducanu said. “There were like junk balls in the middle of the court. She just kept getting it back. I think that I wasn’t probably going for my shots as much because of the conditions, as well.”