Manchester United will finally sign Antony from Ajax for €100 million (£84.4m) with the Brazilian flying to England on Monday for a medical and to complete the move. 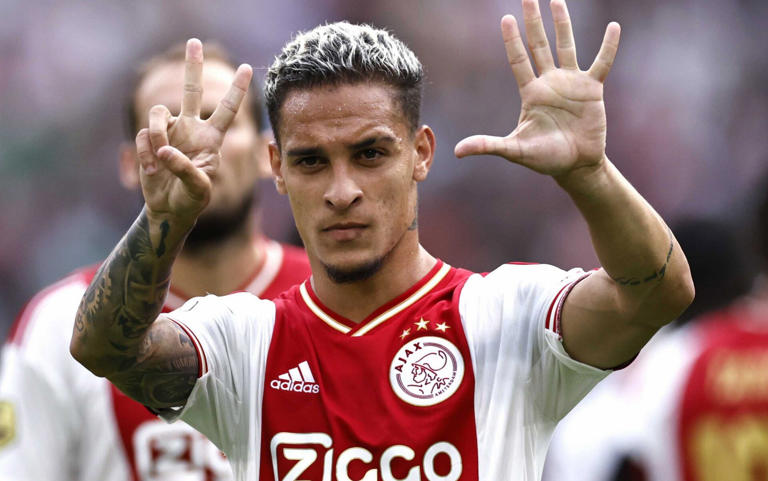 The 22-year-old has been the No 1 target of United’s new manager Erik ten Hag all summer although there were fears that Ajax would not sell no matter what United offered.

However an outline agreement was reached on Saturday with Ajax deciding the fee, a record for a Dutch club, was simply too good to turn down. It is made up of €95m from United up front with just €5m in add-ons.

The total fee is the same as Ajax have quoted to United throughout this transfer window. United have met it having been set to walk away after an €80m bid was rejected last week, only to then bid €90m a few days later and now the full €100m.

Antony will sign a five-year contact and will become United’s third most expensive ever signing, after Paul Pogba, for £89m, and the £85m they will eventually pay Leicester City (£80m plus £5m in add-ons) for Harry Maguire.

United’s offer for Antony was rubber-stamped at an Ajax board meeting with the player having pleaded again on Friday to be allowed to leave and join United. Coach Alfred Schreuder has maintained he wanted the player to stay at Ajax.

Antony was left out of the squad for Sunday’s league game away to Utrecht – which Ajax won 2-0 – which was the second game in a row he has missed. He has been training on his own for the past 10 days. Personal terms had already been agreed between United and Antony’s representatives who have based themselves in London to close the deal.

Ajax have already sold defender Lisandro Martinez to United for a fee that could rise to €67m (£56.8m). It means they will have brought in €167m (£142m) from United – roughly the same as the club’s annual turnover.

Antony was a key player for Ten Hag at Ajax, scoring 12 goals last season mainly from the right wing, and agreeing the deal is a clear sign of United backing their manager.

The club are also moving for Newcastle United goalkeeper Martin Dubravka, to provide competition for David De Gea and are considering signing a right-back or a midfielder or possibly even another forward before the transfer deadline.