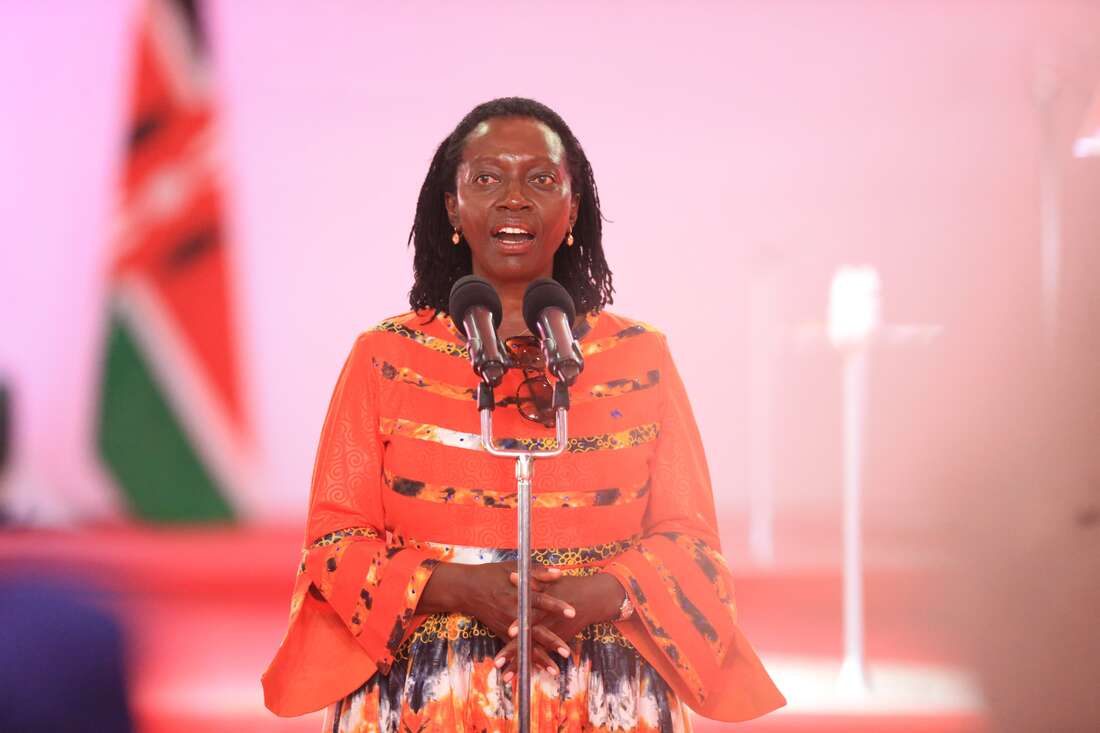 In her affidavit filed at the Supreme Court, she alleges that IEBC’s election technology was tampered with by 19 foreigners and two Kenyans. Photo | File | NMG

The 2022 presidential election was rigged way before August 9 through 21 individuals— 19 foreigners and two Kenyans—who had access to the electoral agency’s technology, Azimio presidential candidate Raila Odinga and his running mate Martha Karua allege in court.

Mr Odinga and Ms Karua add that the alleged rigging began in March 2022 through intrusion into and tampering with the Independent Electoral and Boundaries Commission’s (IEBC) systems by foreign nationals.

Without giving the names of the individuals allegedly involved in the scheme, Mr Odinga and Ms Karua claim the interference resulted in manipulation and alteration of voter turnout and Kiems kit data on election day and the subsequent declaration of William Ruto as President-elect.

The petitioners state that the 21 individuals, who are not employees of the IEBC, manipulated figures and election results generated by the presiding officers in the field, thus compromising the integrity of the election.

In the petition pending determination before the Supreme Court, the two leaders further alleged a breach of security of IEBC’s election materials, systems and devices.

“Mr Chebukati was personally continuously deleting and uploading different result declaration forms—Form 34A, 34B and 34C—even after the declaration of the final ‘outcome’ on August 15, 2022, as shown by the use of his credentials in the logs of the IEBC portal,” Ms Karua alleges.

She adds that forms 34A were being intercepted and stored temporarily in an external address not belonging to the IEBC, so as “to allow the interceptor to manipulate the forms 34A before re-uploading and uploading different forms 34A”.

She further alleges that police investigators found an unattended laptop at the verification auditorium at the National Tallying Centre at Bomas of Kenya, allegedly belonging to a Mr Koech Geoffrey Kipngosos, an agent of the United Democratic Party.

According to Ms Karua, the laptop was connected to an external network “where forms 34A were being stored temporarily, downloaded and then re-uploaded to the IEBC portal through an application for sharing data (Sharepoint)”.

Court papers indicate the basis of the petitioners’ claim of interference with the election is a forensic communication analysis of electronic devices seized from three Venezuelans arrested on July 21 at the Jomo Kenyatta International Airport. The analysis was done by the Directorate of Criminal Investigations.

“Evidence obtained from the forensic communication analysis of the electronic devices that were in the possession of the said three foreigners on the eve of the General Election reveals serious and alarming facts that would later be manifest in the disputed electoral process, system and conduct of the elections,” court papers indicate.

“The historical analysis of one of the laptops indicated the user is able to directly log into the IEBC local IP address using remote desktop tools. The history demonstrates that the remote access to the IEBC IP address began in March 2022,” says Ms Karua.

Ms Karua adds that the analysis showed that a person named “Jose Grecoria Camarigo Catellanos was the super administrator of the IEBC Integrated Database Management System (IDMS) and has all rights to manage IEBC field staff using Kiems kit.”

The said person can also add, remove and delete data using the system and can assign [roles] to IEBC staff, Ms Karua claims.

Another claim is that a day after the election, 687 Kiems kits were still open.

Vote variance
Ms Karua also complains that the IEBC chairman made a mistake by declaring the final result of the presidential election without the tally and verification by the commission of results from 27 constituencies.

“The tally and count in the 27 constituencies would have affected the outcome of the presidential election,” she states.

In the affidavit, Ms Karua alleges that forms 34A issued to the Azimio agents at the polling stations and electronically transmitted through the Kiems kits to the National Tallying Centre vary from those in the IEBC portal.

She has picked 41 forms 34A from polling stations in Bomet (Chepalungu, Sotik and Konoin) and Kiambu (Kiambaa and Gatundu North) as well as Lurambi in Kakamega as samples.

She states that in all 41 forms 34A, Mr Odinga’s votes have been reduced and Dr Ruto’s increased by the same number of votes deducted so that the total remains the same.

However, she clarifies, that the serial numbers of the forms remain the same.

“It shows an ability or possibility of selective interference with the data only while giving the impression of non-interference,” explains Ms Karua.

The Azimio presidential running mate adds that the evidence collected from the 41 forms 34A in Bomet and Kiambu counties indicate a widespread pattern that would significantly alter the results of the presidential election.

She wants the apex court to order a forensic audit and scrutiny of all the forms 34A from the two counties.

Ms Karua also wants the Supreme Court to invalidate the presidential election under the provisions of Section 83 of the Elections Act, 2011.

She claims the irregularities and errors in the 2022 presidential election were not minor or administrative or occasioned by human imperfection.

In a further attack on the IEBC chairman, Ms Karua says that despite the nullification of the 2017 presidential elections, Mr Chebukati has continued to act and operate outside the law.

“His conduct has escalated to blatant and wilful subversion of the Constitution and the sovereign will of the people of Kenya,” she states.

She adds that the internal wrangles could have been the cause of the “suspicious” stoppage of the display of running results at the National Tallying Centre.