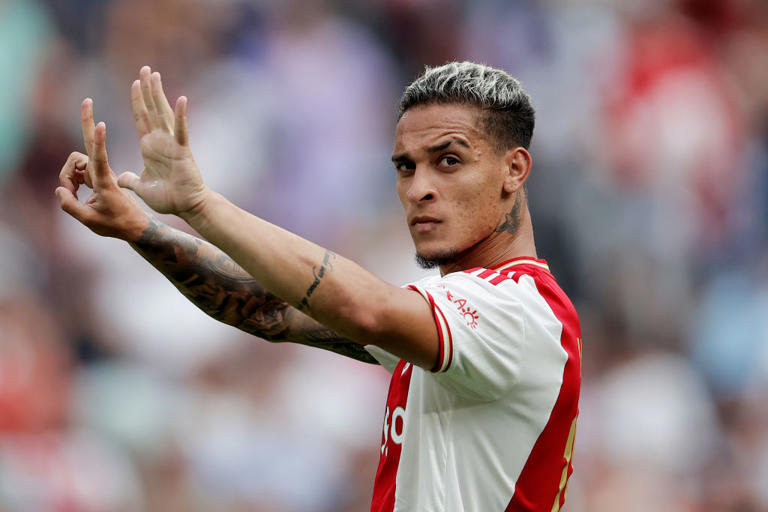 Manchester United target Antony has made himself unavailable for Ajax’s Eredivisie match against Sparta Rotterdam on Sunday as he looks to seal a move to Old Trafford.

The Red Devils are making a big push to try and land the Brazilian before the transfer window closes, having had an offer worth up to €80million (£68m) rejected on Thursday.

Antony is desperate to be reunited with Erik ten Hag in the Premier League and is starting to take matters into his own hands, skipping training on both Friday and Saturday after Ajax rejected United’s offer.

Now De Telegraaf report that the 22-year-old will not be part of Sunday’s matchday squad to face Sparta, with Steven Berghuis coming into the starting XI instead.

Manager Alfred Schreuder later confirmed: ‘Antony is not in the squad. I spoke with Antony and he told me that he didn’t feel 100% ready to play. I only want players in the squad that are 100% focused on Ajax.’

Although Antony refused to train with the team, he reported to the club’s training base on both Friday and Saturday and did a short workout in the gym before returning home.

Despite the winger’s clear desire to join United, Ajax are prepared to stand firm and are not worried about Antony’s stance or attitude.

As far as the Dutch club are concerned, the absolute worst-case scenario is that Antony continues to boycott training and matches until the end of the window, after which point he will be reintegrated into the team. © Provided by MetroAntony is keen to be reunited with Ten Hag at United (Picture: Getty)

Schreuder has a good relationship with the attacker and understands his position, while Ajax’s hierarchy believe Antony will want to get back on the pitch quickly if a move to United does not materialise given that it is a World Cup year.

Ajax still maintain that they want at least €100m (£85m) for the Brazilian, and there is an expectation that United will offer closer to that figure as the transfer deadline approaches.

Antony was non-committal when asked about his future in an interview with De Telegraaf, saying: ‘What I can say is that I want to come to the right decision with my family, business partners and Ajax, which is good for everyone. In the end, God determines my future.’

Asked if he could guarantee he is staying at Ajax beyond the summer, he added: ‘No, to be perfectly honest, I can’t.

‘Now I am focusing on playing football and have put all other matters in the hands of my agents and my brother. They will advise me on what is best.’

United are believed to be readying an improved offer for Antony, though it is not expected to reach Ajax’s £85m asking price, while they are also looking to bring in a second new midfielder to accompany Casemiro as well as a new striker.