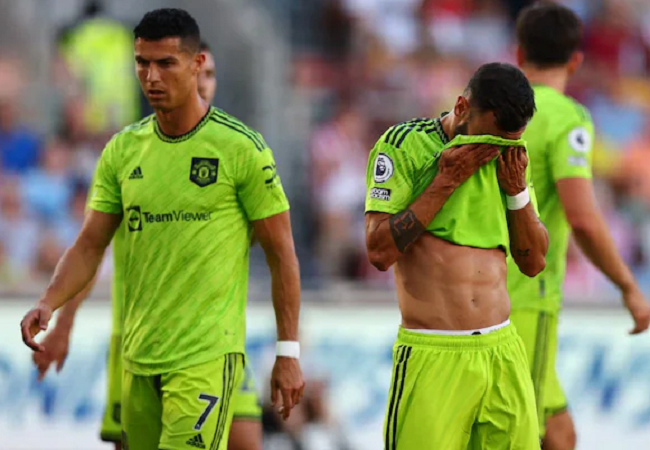 Manchester United continue their disappointing Premier League season start as they suffered a humiliating 4-0 loss to Brentford at the Gtech Community Stadium on Saturday evening.

The Red Devils got off to the worst possible start as Brentford took the lead in the 10th minute when Josh Da Silva got his second goal of the season with a strike from distance that slipped through the hands of David de Gea.

It got worse for United seven minutes later as Brentford pressed high and forced an error from Christian Eriksen to allow Jensen to fire past De Gea from 10 yards out.

While United showed signs of life in the attack, Brentford managed to added a third goal in the 31st minute when Ben Mee got on the end of Ivan Toney’s knockdown to head into an empty net.

The demolition continued as the fourth goal arrived four minutes later when a swift counter-attack ended with Toney pick out Mbeumo to slot past David de Gea.

Erik ten Hag responded with a triple change at the start of the second half as Tyrell Malacia got his debut in place of Shaw, while Scott McTominay and Raphael Varane replaced Fred and Lisandro Martinez.

United carved out their first chance six minutes after the halftime break when Diogo Dalot picked out Ronaldo, who sent his header over the crossbar from close range.

The Red Devils started seeing more of the ball as the half went on and they forced a save out of Raya, who was called upon to keep out McTominay’s header on 68 minutes.

Ten Hag’s had a couple more sights at goal, with Eriksen going closest on 82 minutes while De Gea was called into action to on a couple occasions.

In the end, 4-0 was how the encounter as Ten Hag starts Red Devils reign with back-to-back defeats in the Premier League while Brentford get their maiden of the campaign.