Makerere University, Uganda: Daphin Naudho is a girl who hails from Luuka district living a life without both parents, now staying with her grandmother in Entebbe areas. 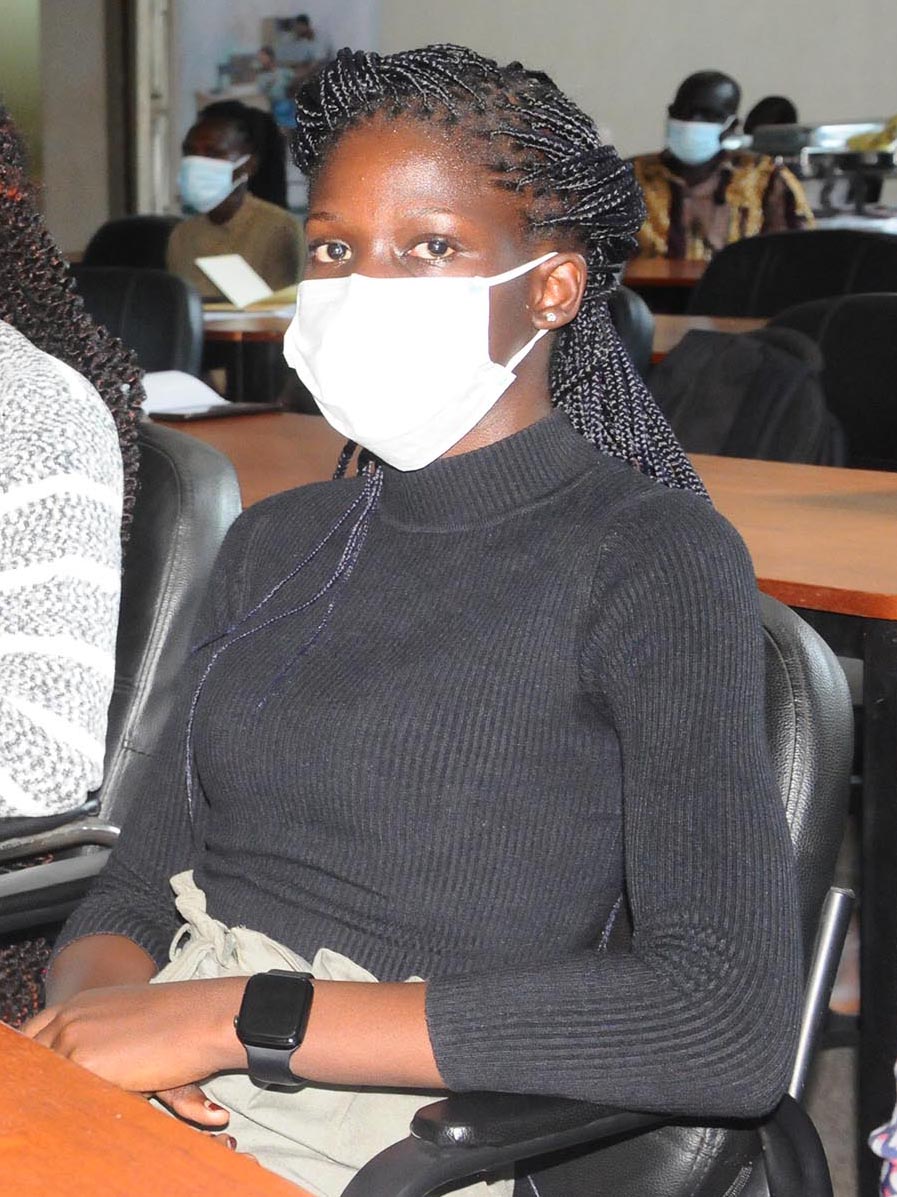 In a one on one interface with her, Daphin narrates that life seemed useless at one time when she struggled to make ends meet in academics.

In that situation, several relatives supported her education including academic scholarships she would secure during High school time because of her brilliance.

“When I joined Makerere University in my first year, it was an untold struggle for me to meet University expenses like tuition, functional fees, accommodation etcetera which made me traumatized since I was a private student”. Daphin narrated.

“On day I heard of Chinese Embassy call for Students Scholarship Application  under the Directorate of under Gender Mainstreaming Directorate of Makerere University, reconsidering my academic wellness and crippled financial history, I purged in my application and was later called for an interview and my past turned into a blessings instead.”. Daphin informed.

The Directorate is charged with mainstreaming on teaching and learning , research and innovations, knowledge transfer, partnerships and networking and support service with  emphasis  placed to Girls or female students on the basis of Woman emancipation.

Under Chinese Ambassador’s  Scholarship, Daphin is pursuing a Bachelor’s Degree of Arts in Social Sciences, College of Humanities and Social Sciences (CHUSS) where she’s doing well as she emerging the best receiving an excellency award.

Beneficiaries of the Chinese Embassy Scholarship are based on financially crippled students with high academic potential {best performance}.

*A student should be from a genuinely poor socio-economic background, should not be admitted on the Uganda Government sponsorship in any Public University.

*One  shouldn’t have any other scholarship say District Scholarship, MasterCard, etcetra and must be willing to participate in a selection process as shall be determined by the Gender Mainstreaming Directorate Scholarship Committee.

Asked about events after winning a scholarship, Daphin notes there’s drastic change as i fully concentrate on my academic endeavors unlike life before where it was “tragic”, having to meet tall expenses which pushed me to make adjustments in order to incorporate with education and now my goals are clear.

There has been a lot of positive gains from the scheme for instance improvement in public speaking confidence, fighting sexual harassment at Makerere University.

To her, after the course, Daphin intends to start up an organization to support financially disabled students that are academically active citing many students out there with abilities but crippled like she was.

She believes that  family and social environment have played great role in shaping the behavior and character of individuals.

The scholarship scheme has made improvement in Personal Life of Students, that is, increase in research capabilities, improvement in teaching capabilities, Promote the Chinese language, a preferential candidate for jobs in Chinese running projects, be ﬁnancially strong and able to support their family by ﬁnding a job.

*Although China is not an English-speaking country, Chinese universities offer admissions to international students in both English and Chinese.

Most international students join academic programs that are offered in English which inconveniences them due to communication barrier during their studies and in daily living, which ultimately affects their learning during their stay in China.

For the case of international students that study from China on these scholarships it is recommend that Chinese universities provide a more conducive environment especially by offering more English elective courses to them and train university administration staff in English.

This would help minimize the language barrier, learning ability and adaptation to Chinese culture of international students could be improved.

Ultimately, this investment of the Chinese government into education will be productive in achieving conducive international relations, economic growth of  China, benefiting countries and increase China’s global soft power

China’s improving economic status is playing a vital role in the international race for soft power.

Other beneficiaries are seen at award ceremony of Chinese Ambassador’s Scholarship for Excellence and Friendship at Makerere University last month. Photo by Julius Mugaga Tukacungurwa/KMA Updates.

The Chinese government has been investing considerably in the education sector in an attempt to attract international students from different countries by offering many scholarships each year.

The previously reported ambiguous results about this scholarship program needed to be confirmed.

Chinese Embassy in Uganda offers Makerere University 30 scholarships to be awarded to continuing students in various Colleges each Academic Year.

The scholarships that commenced in the 2018/2019 Academic Year are administered by the Gender Mainstreaming Directorate (GMD) of Makerere University and the total scholarship offer is UGX2,800,000 to each beneficiary.

One hundred twenty (120) students have been enrolled to this scholarship scheme following the Four consecutive years of Aid from the time of initiation in the 2018-2019 academic year.

The scheme emphasizes Eligibility where Scholarship applicants should already be students of Makerere University in their Second Year of study, successfully completed their first year and have complete results (first and second semester results with a minimum CGPA of 2.80 and above.

The Embassy has awarded a second cohort of 30 scholarships to continuing students offering various courses in different Colleges at Makerere University Main Campus for Academic Year 2020/2021.

At an event that took place on Tuesday 26th/July/2022, this was after reconsideration for supporting students in their final year unlike before when students were only facilitated for one academic year.

These adjustments were after several attempts made by the Director to see Gender Mainstreaming Directorate that students be supported for their entire academic years.