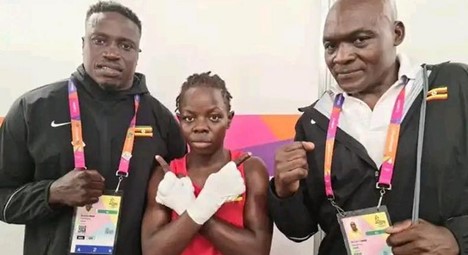 Nakimuli won by walk over after her opponent failed to make the weight. She was due to face Serra Leone’s light-flyweight boxer Sara Haghighat-Joo who failed to make her weight and thus Nakimili was handed a walk over.

The decision means Nakimuli is through to the women’s light-flyweight semi-finals and as of now, guaranteed a bronze medal. She could upgrade to silver or gold if she progresses to the finals. A victory in the next round places her in contention for gold or silver as all semi-finalists are assured a bronze medal.

Nakimuli also becomes the first Ugandan woman to win a boxing medal and she has done without throwing a single punch.

This brings Uganda’s medal tally at the 2022 Birmingham Commonwealth Games to three.

Jacob Kiplimo won gold medal in 10,000m and will also compete in the 5,000m finals. Victor Kiplangat also won gold in the marathon.

Earlier in the day, Uganda’s boxing camp suffered a heartbreak after bombers captain Joshua Tukamuhebwa lost by split to Canadian fighter Wyatt Sanford in the quarterfinals.

The result ended Tukamuhebwa’s medal hopes after winning two bouts to progress to the quarterfinals.

He noted that it was ‘not his lucky day in office’.

“I won the first round but in the second round, we were in a draw and the third round was the decisive. In the final round, he was overly defensive…He also wanted the win but I think it was his lucky day. I have no regrets, I have done my part”, he said.