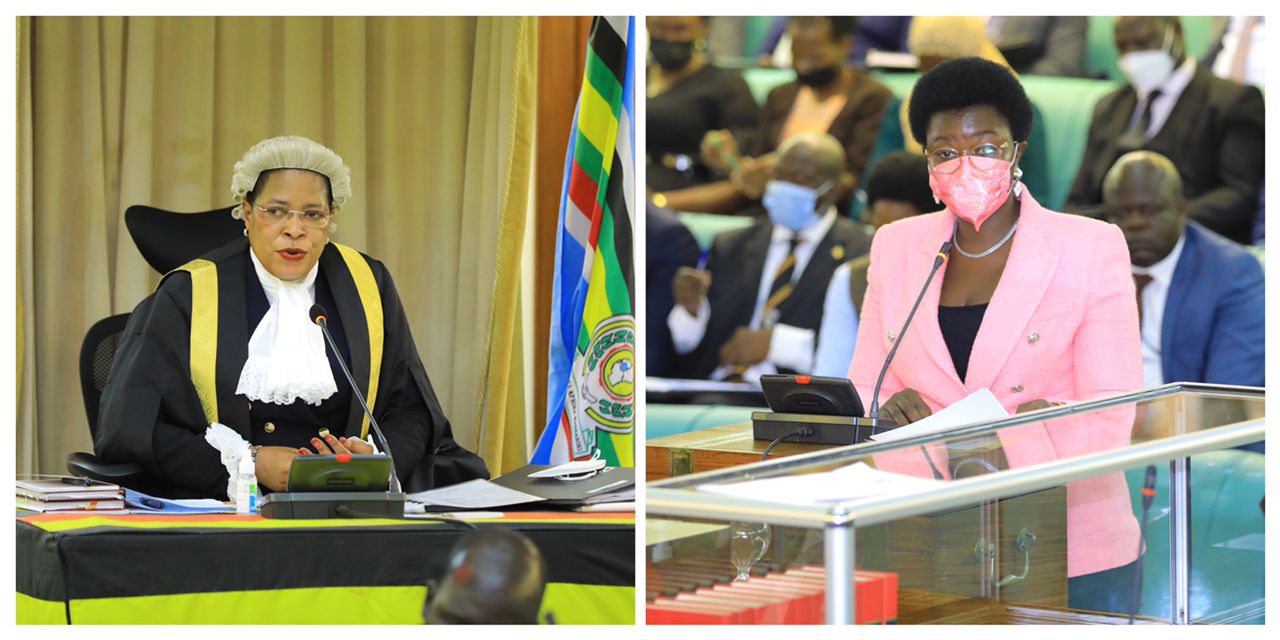 The Speaker Of Parliament Rt.Hon. Anita Among Annet (Left) and Hon Lillian Aber.

Speaker of Parliament Anita Among yesterday directed the Auditor General to conduct a forensic audit into the Shs1.3 billion allocated to support nodding disease affected persons.

According to the Centre for Disease Control, nodding disease syndrome is a neurologic condition that is characterized by episodes of repetitive dropping forward of the head, often accompanied by other seizure like activity like convulsions or staring spells.

Reports of the disease emerged as early as 1998 in Kitgum district. However, thousands of cases were registered in Northern Uganda in the late 2000s.

Members of Parliament, yesterday, called for prioritization of interventions into nodding disease, and an audit into funds allotted to support to those affected by the disease. In March 2018, Parliament authorized government to spend shs1.3 billion for the revitalization of the interventions for nodding syndrome in Northern Uganda.

This followed a campaign to raise funds and support the children affected by the disease by the late Speaker, Jacob Oulanyah.

In her motion, Aber urged government to make a follow up on the funds allocated to ensure effective utilization, and also train personnel on how to handle those with the disease.

Aber revealed that the number of nodding disease-affected children remains high , with Kitgum having 1,449, while the mental health department which supports the children grapples with lack of space to support the increasing number of cases.

“We request that government provides food relief and shelter to the affected family. There is an NGO, Irene Gleeson Foundation that has taken the mantle to spearhead mobilization for food items to support these families but it would have been better if the Office of the Prime Minister took on this,” Aber said.

The Leader of the Opposition, Hon. Mathias Mpuuga, called for immediate, medium- and long-term strategy to curb the disease saying the disease was seriously affecting the children.

“We need resources to go and take care of the immediate social needs of these families and their housing conditions; they have no food and they look dejected,” Mpuuga said.

Hon. Anifa Kawooya, the Minister of State for Health in Charge of General Duties said that government is alive to the challenge of the nodding syndrome.

“Initially the Ministry of Health was the one receiving the budget for nodding disease but from the financial years 2018 and 2019, the Ministry of Finance sends the money directly to the districts,” she said.

She added that the ministry welcomes the forensic audit into the funds provided to cater for the victims.

Aringa north County MP, Hon. Godfrey Onzima said that what is needed is a comprehensive report and accountability.

Hon. Betty Aol Ocan (FDC, Gulu City) stated that a non-governmental organization, Irene Gleeson Foundation has reported new cases of the disease. She said that the Ministry of Health needs to take charge and ensure that these cases are managed.

“People are asking if we have done something for these nodding syndrome children, it is a big shame,” she said.

Hon. Lucy Akello, the Amuru District Woman MP said that the disease is treatable if children are given the right food. She said in her constituency, five children from one family are all battling nodding disease.

Speaker Anita Among called for an audit on the funds that have already been released for the treatment of nodding disease.

Among tasked government to report to the House after every three months.

“We will have a forensic audit on the funds released for nodding disease in addition to the rest of the prayers. The Minister of Finance should also give us evidence that this money has been going to the districts,” Anita Among said.