The Hill:Follow View Profile Blinken calls on Russia to halt unlawful ‘filtration’ of Ukrainians into Russia

Secretary of State Antony Blinken called on Russia on Wednesday to cease its “filtration” system that has forcibly deported thousands of Ukrainians in Russian-occupied territory, which he called a war crime. 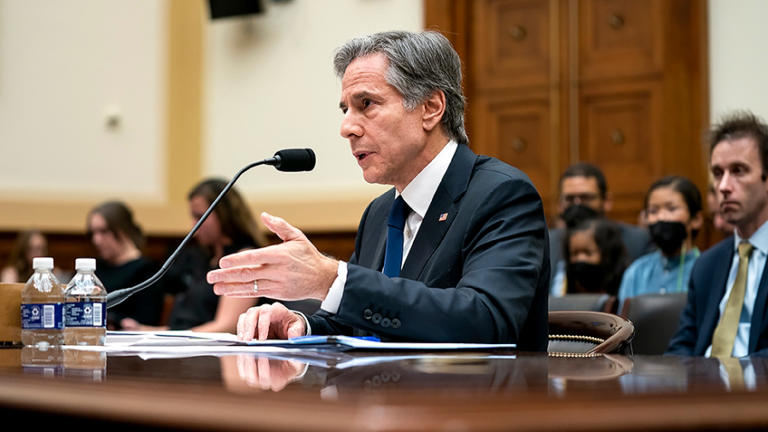 “The unlawful transfer and deportation of protected persons is a grave breach of the Fourth Geneva Convention on the protection of civilians and is a war crime,” Blinken wrote in a statement, citing as many as 1.6 million unlawful deportations, detainments and interrogations.

Ukrainian President Volodymyr Zelensky put the number at 2 million. “So many of our people have already been taken to Russia. Several hundred thousand children,” the president said in a video address Wednesday.

The exact numbers are unknown, Zelensky said, because “all these deported people are deprived of means of communication, their documents are taken away from them, they are intimidated and taken to remote areas of Russia to make it as difficult as possible for them to return to their homeland.”

Blinken called on Russia to release the Ukrainians and facilitate their safe return — and to allow outside observers to monitor the “‘filtration’ facilities” and areas to which Ukrainians were forcibly relocated.

Russian President Vladimir Putin took a step in the opposite direction on Monday, signing a new passport decree expanding a fast track to Russian citizenship for Ukrainians.

Putin also recently introduced the Russian ruble as currency in occupied areas as part of his efforts to delegitimize the Ukrainian state and assert Russia’s influence.

As part of the “filtration” process, Blinken wrote, many Ukrainians are coerced into signing legal agreements not to return to Ukraine.

“Reports also indicate Russian authorities are deliberately separating Ukrainian children from their parents and abducting others from orphanages before putting them up for adoption inside Russia,” he wrote, adding that as many as 260,000 children have been among those pushed through “filtration.”

Blinken also cited “mounting” evidence that Russia is “detaining or disappearing thousands of Ukrainian civilians who do not pass ‘filtration.’” Ukrainians with ties — or potential ties — to their country’s army, media and government are among those flagged.

“President Putin and his government will not be able to engage in these systematic abuses with impunity,” Blinken wrote, affirming U.S. support for the collection of evidence against Russia by Ukraine and international authorities.

For the latest news, weather, sports, and streaming video, head to The Hill.

Blinken calls on Russia to halt unlawful ‘filtration’ of Ukrainians into Russia (msn.com)