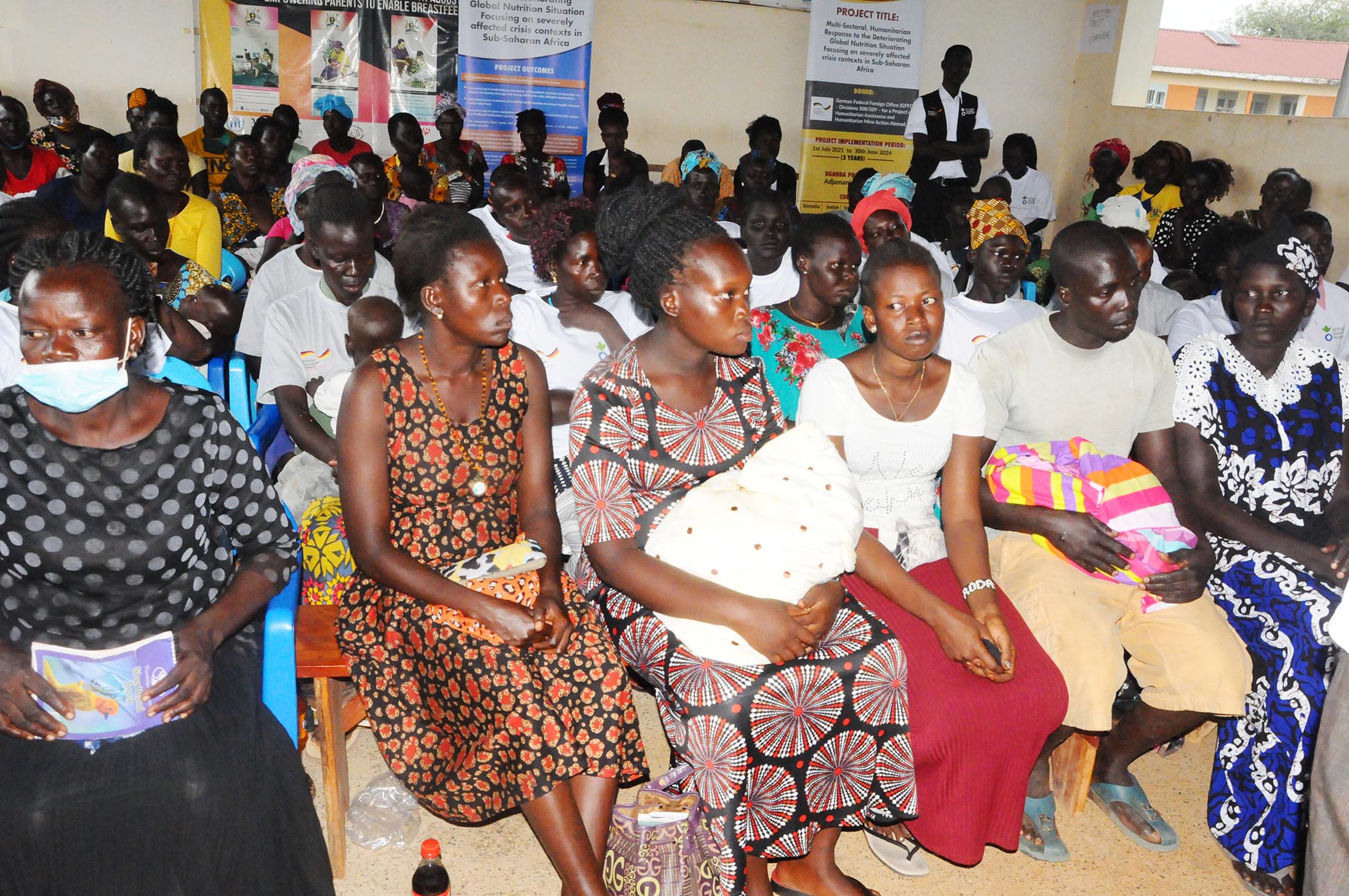 Mothers are seen attentively listening to facilitators from  Action Against Hunger USA-Uganda Mission (ACF)on how to better their nutrition, Water Sanitation and Hygiene and recommended breastfeeding during a community dialogue at Pagirinya HCIII in Pagirinya Refugee Settlement, Adjumani District. Photo by Julius Mugaga Tukacungurwa.

Members of the settlement raised concerns around additional interventions by Action Against Hunger in supporting them manage nutrition, Water Sanitation and Hygiene.

These voices came out during a community dialogue that was held at Pagirinya HCIII where over 150 women of reproductive age some with their children attended to interact with ACF on how they can be aided further. 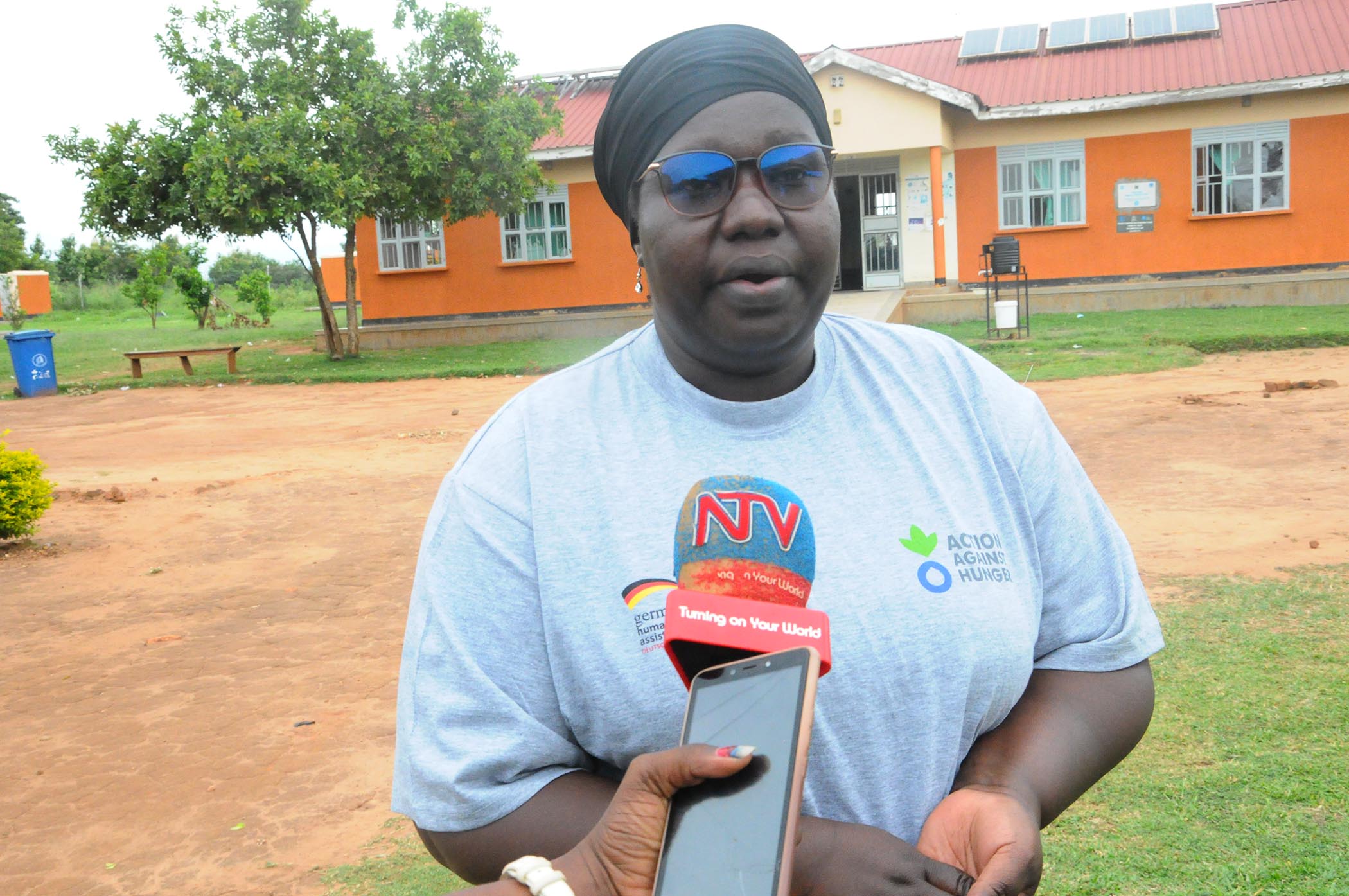 Mariam Akiror the Advocacy and Communications Coordinator at Action Against Hunger USA-Uganda Mission (ACF) speaks to media after collecting views from over 150 mothers at Pagirinya HCIII on how ACF can support them manage nutrition, Water Sanitation and Hygiene. Photo by Julius Mugaga Tukacungurwa.

Mariam Akiror, the Advocacy and Communications Coordinator at Action Against Hunger USA-Uganda Mission expressed gratitude over the tremendous work done by refugee and host community women in educating their fellows on nutrition issues.

“I am very excited to today seeing a big number of women coming together to voice their concerns on how they are preventing and managing malnutrition traditionally, helping fellow women to educate them on how to improve on their nutrition and cooking issues”. Mariam remarked.

“They have also expressed that some of them lack hand washing facilities like soap however some of them have really performed through their care groups as they have fought malnutrition in their children”. She added.

She pointed that ACF is implementing a 3-year Multi-Sectoral Humanitarian Response to the deteriorating Global nutrition focusing on severely affected crisis contexts in Sub-Saharan Africa Project funded by German Foreign Federal Office (GFFO) responding to nutrition, health systems strengthening and others in the area.

“We have been piloting one of the program that focuses on children from 0-6 months because many times when we talk about malnutrition, stunting we tend to look at those above 6 months”. She quoted.

She committed that ACF is dedicated to continuously support homesteads have kitchen gardens to supplement nutrition diversity as there is so far remarkable reduction in malnutrition cases within the settlement and host communities.

Obulejo Martin RWCII Chairman Pagirinya Refugee settlement Adjumani District emphasized that men are so vital in nutritional development within the settlement since it is a collective responsibility.

“It is very important to involve both men and women in productive activities like agriculture as men have energy to do most activities”. Obulejo remarked.

He pointed that the most important thing is to give men effective awareness as they sometimes absent themselves when it comes to vital gatherings such that they get equipped of knowledge shared there.

Kideni Betty a lead mother from Pagirinya settlement Block C Cluster 15 commended the work of ACF saying the organization has helped them realize sanitation, ways of promoting and sustaining their nutritional status, hygiene through their care groups as there is provision of hand washing facilities and related products.

“As lead mothers, we are also empowered to go to the community and teach our fellow mothers which has helped them fight malnutrition”. She remarked.

She cited need for forming of care mother groups and training as the number of refugees increases day by day adding to the importance of the service.

During the dialogue we met one Arumai Isaac Issa a father of 8 Children in 3 wives with a set of twins of 2 days old delivered at Pagirinya HCIII.

Arumai  a refugee from South Susan narrated that he finds hard time securing enough food to sustain his family. He is a peasant who at times does some engineering works to support his family.

He told us that he was mobilized to attend the ACF community dialogue at Pagirinya HCIII to get equipped with their programs cantered on Nutrition and Livelihood, Health and Water Sanitation and Hygiene (WASH).