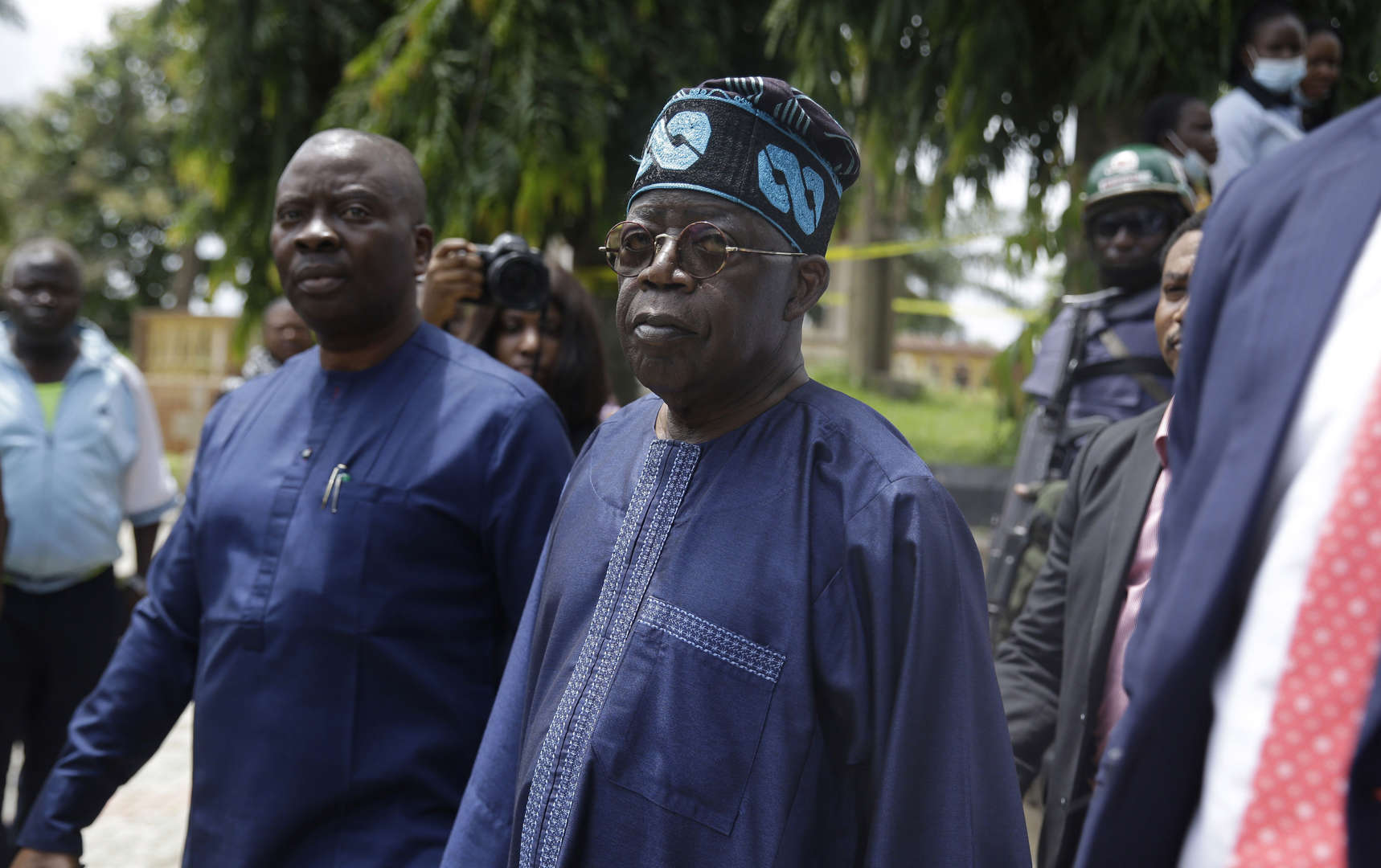 There are indications that the All Progressives Congress presidential candidate, Asiwaju Bola Tinubu, may unveil his running mate on Wednesday.

The PUNCH learnt that Tinubu would conclude consultations with the party’s stakeholders, including governors on Tuesday and would announce his running mate on Wednesday.

It was also learnt that the APC governors and other stakeholders had agreed that the North-East should produce the vice-presidential candidate of the party.

Sunday PUNCH had reported that Tinubu, who emerged the APC presidential candidate at the party’s primary on Wednesday, might settle for a Muslim as his running mate.

It was gathered that the North-East might produce the running mate, while the position of the Senate President would go to the South-East and North-West would produce the House of Representatives Speaker.

An associate of Tinubu and Lagos Vice Chairman (Central) of the APC, Hakeem Bamgbala, in an interview with The PUNCH, confirmed that the presidential candidate would unveil his running mate in the next two or three days.

Bamigbala also said the party had not decided on the issue of a Muslim running mate for Tinubu.

He stated, “The issue of this Muslim-Muslim ticket is still speculation till the next two to three days (Wednesday) when the party will unveil Asiwaju’s running mate.

“It is not enough for anybody to just come out to say the APC is fielding a Muslim VP. Nobody has mentioned that. We are still looking at a credible northerner who can be a Christian too to pair with Tinubu,” he said.

But when contacted, the National Publicity Secretary of the APC, Felix Morka, stated, “We are not in any kind of time competition with the PDP to make that announcement.

“If the PDP chooses to make their announcement on Tuesday, that does not impose any obligation on the APC or any other party for that matter to make a similar announcement by that date,” he said.

According to him, the process of deciding the candidate is not a unilateral decision.

“Again, the choice of vice president will be made through consultation with the party and relevant stakeholders. Nigerians should be patient as they decide on the candidate and the part of the country he is coming from,” he stated.

The APC publicity secretary also confirmed that there were reconciliatory moves by Tinubu to mend fences with South-East political leaders.

He stated, “I am sure you know that since the convention, the presidential candidate of the APC, Asiwaju Bola Tinubu, has been on the road reaching out to and meeting all the aspirants and co-contestants at the primary. And in doing so, he is rallying them back to the base in readiness for the upcoming campaign,” he said.

Speaking to one of our correspondents, Majority Leader of the House, Alhassan Ado-Doguwa, who is from Kano in the North-West, stated that the North-East should produce the next vice-president, while the President of the Senate should come from the South-East.

Ado-Doguwa also stated that the APC could win with a Muslim-Muslim ticket. He noted that Tinubu, a Muslim, is married to Senator Oluremi Tinubu, a Christian.

The lawmaker disclosed that he was part of the negotiations that made northern governors to back southern presidency.

He further said the National Assembly was working with the Progressive Governors’ Forum, to select a vice-presidential candidate for the party.

Ado-Doguwa said, “I want to say we, as a National Assembly Caucus, do not have to champion or advocate any separate cause to ask or to influence the choice of the vice-president. The governors have honestly shown leadership. They provided direction and exhibited a spirit of selflessness, which hitherto was lacking. We now have unwavering confidence in the body of the PGF.

“We are eminent members of the NEC (National Executive Committee), National Caucus and the presidential tripartite committee of our great party, where we offer our bits of advice and help to provide direction for our party.”

Speaking on concerns that Tinubu, a Muslim, might be forced to pick a Muslim running mate from the North where Christians are the minority, the House’ Majority Leader said the APC could win the presidential election with any combination, considering the candidate’s personality.

Ado-Doguwa said, “I believe Senator BAT (Bola Ahmed Tinubu) is a very good choice in this regard. He has a wealth of experience. He has the requisite global exposure to make our country a greater nation. It is, therefore, my thoughts that, even a Muslim-Muslim ticket could fly, just like a reverse case could also work.

“For me, whichever way it goes, the APC would emerge victorious come 2023. The scientific parameters for electoral success in a developing country like our own have proved to us that the ruling APC is still the party to beat.”

Another member of the National Assembly, who spoke on condition of anonymity, however, said Tinubu would likely contest the election with a Muslim running mate.

The lawmaker said, “The truth is that in the North-East, governors are the ones who feel they play a vital role in bringing in the presidential candidate. They will want to pick the vice-presidential candidate too, to add value to the ticket. And in adding value to the ticket, they will prefer to be the ones to bring in the running mate. From all indications, he (Tinubu) is very careful. He does not want to have problems with the governors because they are going to play a vital role in the elections. So, he is trying to take his time. But I can assure you that the North-East is where people are trying to look at because the President (Major General Muhammadu Buhari, retd.) just finished from the North-West. So, it would have been good to give us in the North-East. That is what is on their mind.”

Meanwhile, supporters of the Plateau State Governor, Lalong and some stakeholders of the APC in the state on Sunday quarrelled over the VP slot.

A former Minister of State for Information and Communications, Ibrahim Nakande, in a statement, said Tinubu should not pick Lalong as his running mate.

Nakande said, “As a major stakeholder in the All Progressive Congress in Plateau State, let me without mincing words, first of all, make it clear that, Bola Ahmed Tinubu was not the choice of Governor Simon Lalong at the just concluded presidential primary of the APC that was held at the Eagle Square in Abuja.

“Governor Lalong threw his weight fully behind a former governor of Rivers State, Rotimi Chibuike Amaechi, who has been his political ally for long time and every sincere observer of political events can attest to this.”

He alleged that Lalong was trying to claim he supported Tinubu when he did not.

Nakande added, “But beyond the issue of who Governor Lalong supported, I make bold to say that he does not deserve the vice presidential ticket because he is not a leader who believes in justice and fairness.”

In response, a former Deputy Majority Leader, Federal House of Representatives, Baba Akawu, dismissed claims made by the former minister as lacking in evidence and a product of blackmail and falsehood.

The former lawmaker insisted that the North-Central deserved the position of the vice president in the interest of equity, justice and fairness.

On its part, a group, Save Nigeria Democracy, warned against a Muslim-Muslim or a Christian-Christian ticket ahead of the 2023 presidential election.

The group in a statement by its spokesperson, Jayekuti Oluwadamilare, in Lokoja said such a move by any political party would spell doom for Nigeria’s democracy.

Also, the National Vice President of the Pentecostal Fellowship of Nigeria, Prophet Isa El-Buba, in an interview with journalists in Jos, said that it would be an exercise in futility for any political party to present a Muslim-Muslim presidential ticket.

Buba spoke on the sidelines of the burial of the Pioneer Chairman of the Pentecostal Fellowship of Nigeria, Bauchi State Chapter, Rev. Nathaniel Odekunle.

The Bishop, Catholic Diocese of Yola, Most Reverend Stephen Mamza, also cautioned the APC about adopting a defective Muslim-Muslim ticket.

Mamza said besides such a presidential ticket being dead on arrival, it would serve to further widen current divisions in the country along religious lines.

The Catholic priest also said he was compelled, out of patriotic zeal, to wade into the debate over the dilemma Tinubu had found himself.

He also described the arguments being advanced from some quarters in support of the idea of a Muslim-Muslim ticket, for the APC presidential standard bearer as “disheartening”, because the “Nigeria of 1993, during the time of Abiola and Kingibe, was completely different from Nigeria of today, heading into the 2023 elections.”

He said Muslim- Muslim ticket was discriminatory, adding that it would further fuel exclusion, which was unhelpful, because everybody needs to be carried along.

He said, “ So I wish to advise, especially the ruling party, to desist from going ahead with the idea of Muslim-Muslim ticket or Christian-Christian ticket. Why did they not decide to pick two people from the North, the reason is that you want to carry people along.

“Why we did not even think of carrying a presidential aspirant, and his running mate from the south? It is because they want to carry everyone along.

Meanwhile, an APC presidential aspirant and founder of the Citadel Global Community Church, Lagos, Tunde Bakare, has congratulated Tinubu on his emergence as the party’s presidential candidate.

In a statement read out during his sermon on Sunday, Bakare stated, “His emergence as the standard bearer and presidential candidate of the APC is a testament to his significant contributions to the cause of the South-West, as well as his labour towards the formation and establishment of the APC.’’

Bakare, who polled zero votes in the primary election, however, described his quest to serve the country as a ‘‘worthy adventure for a worthy cause’’ and expressed confidence in the advent of a new Nigeria.”

Meanwhile, there were reports on Sunday that the Peoples Democratic Party presidential candidate, Atiku Abubakar, on Saturday met with some members of the international community in Zurich, Switzerland as part of moves to pick the President of the World Trade Organisation.

But Atiku’s spokesman, Paul Ibe, when contacted, said, “There is nothing like that; he has stepped up his consultations to search for a candidate that will be acceptable and complement him.”

Also, a top member of the party, said, “Candidates are being shortlisted and it is not an easy thing at all, possibly more difficult than winning the ticket because the truth of the matter is that all eyes are on who will be the candidate.”

“By now, he has a shortlist that he is working on with the party leadership. The announcement will be on Tuesday.

A member of the PDP NEC, and former governor of Sokoto State, Attahiru Bafarawa, in an interview with The PUNCH, said, “The vice-presidential slot is automatically in the South. Already, a committee of people who will work and decide on it has been appointed. The committee will decide. He (Atiku) has thrown it open in conjunction with PDP governors and BoT members to contact the party.”

An analyst and Executive Director of Women Advocates Research and Documentation Centre and Co-Convener of Womanifesto, a coalition of over 500 women groups, Dr Abiola Akiyode-Afolabi, in an interview with The PUNCH, said the APC and the PDP were interested in ethnicity and religion in picking running mates not gender.

A Professor of Linguistics, University of Ibadan, Francis Egbokhare, told The PUNCH, said Muslim-Muslim ticket was risky because Nigeria’s diversity had been mismanaged unlike when the late Moshood Abiola won the 1993 presidential poll.