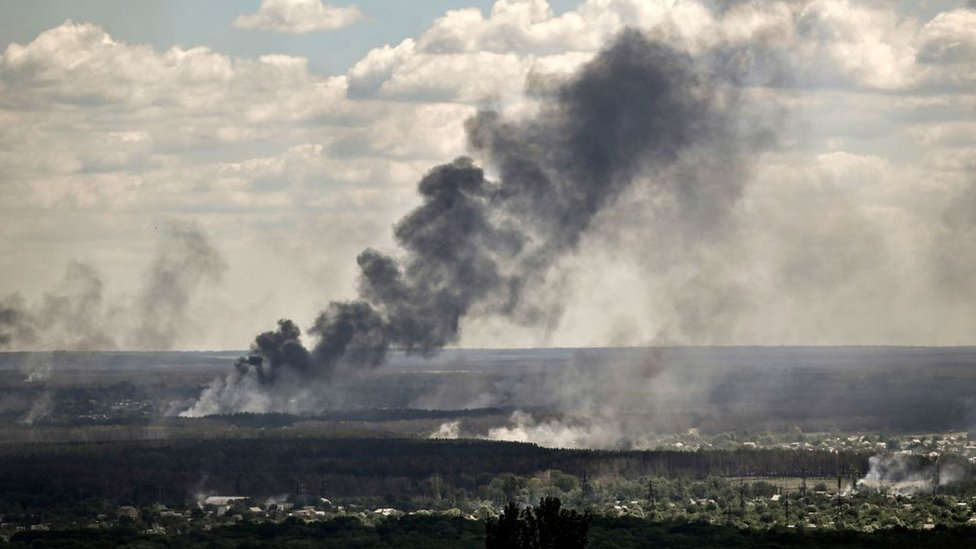 Ukrainian President Volodymyr Zelensky has said that fighting for the city of Severodonetsk may decide the outcome of the war in the east of the country.

“In many respects, the fate of the Donbas is being decided there,” he said as combat raged in the industrial belt with Russian and separatist forces.

He said his troops were inflicting major losses on enemy forces.

But Ukrainian forces have been pushed back to the outskirts, according to the region’s top Ukrainian official.

Serhiy Haidai, governor of the Luhansk region (which makes up the Donbas along with the neighbouring Donetsk region), said special forces had pulled back after Russia “started levelling the area with shelling and air strikes”.

“Our [forces] now again control only the outskirts of the city,” he told local media. “But the fighting is still going on, our [forces] are defending Severodonetsk.”

“It is impossible to say the Russians completely control the city,” he added.

Some 15,000 civilians remained in Severodonetsk and the nearby city of Lysychansk, the governor said.

Russia said on Wednesday that Ukraine was suffering “significant losses in manpower, weapons and military equipment” in the Donbas.

The focus of the war switched to the east at the end of March after Russian forces pulled back from the region around Ukraine’s capital, Kyiv. Large parts of the Donbas have been under the control of Russian-backed separatists since earlier fighting in 2014-15.

In another development, UN chief Antonio Guterres warned that the consequences for the world of Russia’s invasion were worsening, with 1.6 billion people affected.

“The war’s impact on food security, energy and finance is systemic, severe and speeding up,” he said.

Russia invaded on 24 February, saying it was seeking to demilitarise and “de-Nazify” Ukraine – a claim that has been widely discredited.

Since the war began, at least 4,253 civilians have been killed and 5,141 injured according to the UN, along with thousands of combatants on both sides, while more than 14 million people have fled their homes.