Banner of Deputy President William Ruto before and after removal in Kisumu. 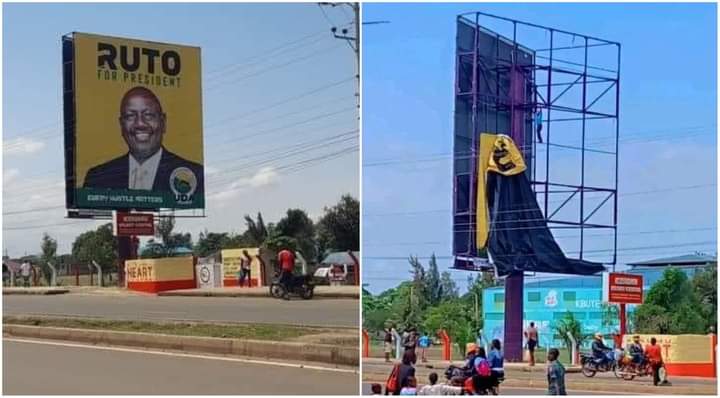 Firmbridfe advertising company that mounted Deputy President William Ruto’s campaign banner on its billboard in Kisumu has confirmed that it was removed.

The company however told the Star that they have no complaint about the removal of the billboard banner in Kisumu.

The company’s operations manager Joseph Odindo said the advertising billboard belongs to them.

He said they have no intention to complain to anybody over the removal of the banner.

“That is our property and we have not complained to anybody. That is our billboard,” Odindo told the Star on phone.

He, however, declined to comment further on who removed the banner insisting they have no complaint.

This comes as a section of Ruto’s supporters accused Azimio’s presidential flag bearer, Raila Odinga, of the removal of the campaign banner.

Wanga said they are not aware of any legal processes followed in putting the billboard.

He asked the company in question to produce documents showing whether they followed the laid down rules of placing such advertisements.