Makerere, Kampala-Uganda: Students from The College of Veterinary Medicine, Animal Resources and Bio Security (CoVAB) on Wednesday May 25, 2022 were awarded PhDs, degrees and Diplomas during the third session of the 72 nd graduation ceremony held at the freedom square. 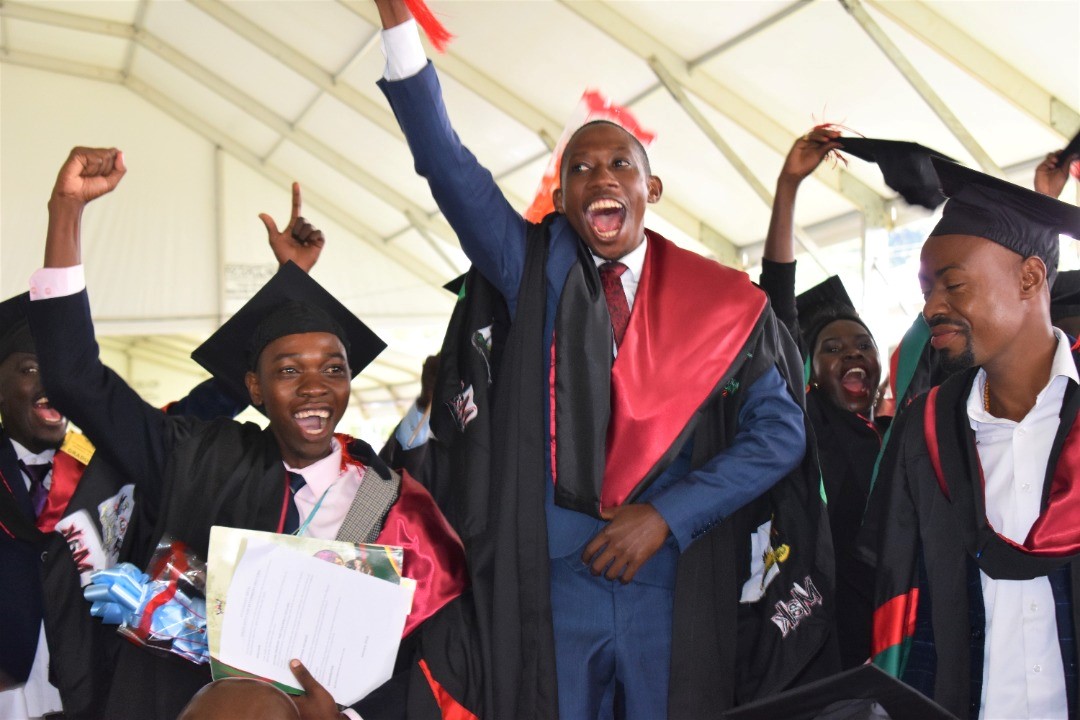 A section of graduands jubilate upon graduating on Wednesday 25th May 2022/Courtesy Photo.

At the event, three of the best performing students of the Bachelor of Veterinary Medicine were recognized and awarded a total cash prize of Fifteen Million Uganda Shillings by Norbrook and Uganda Veterinary Association (UVA). 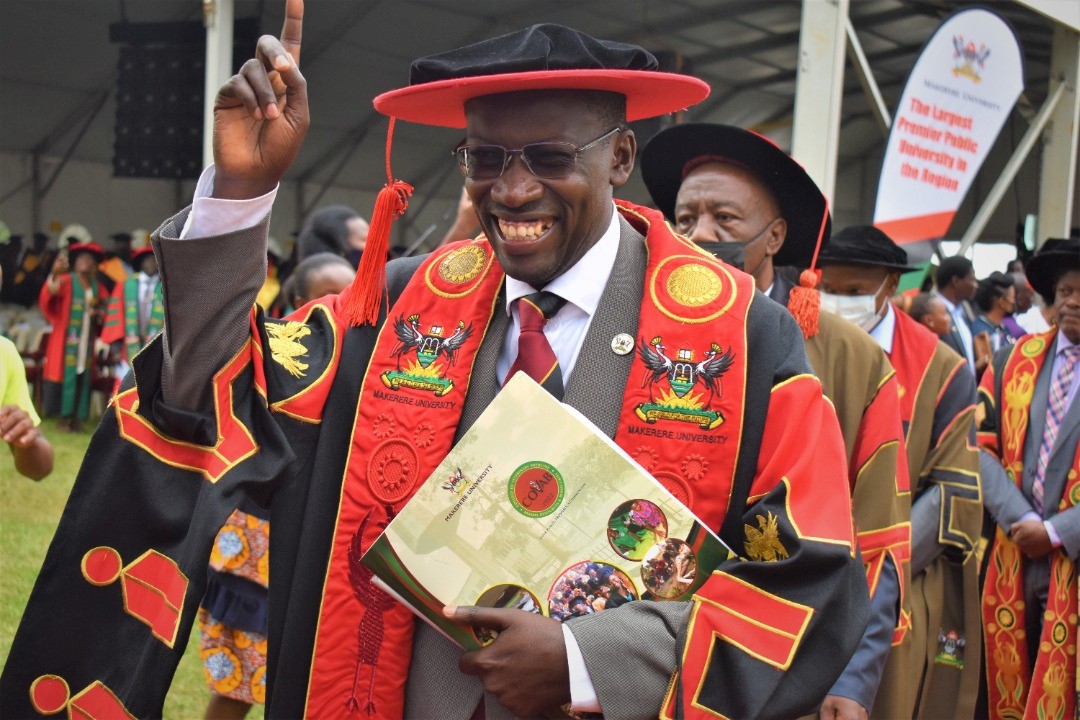 Also among the graduates were 2 who graduated with Ph.Ds namely Dr. Pellegrine Sebulime and Dr. Namayanja Monica, as well as a total of nine First Class degrees and one Second Upper drawn from various programs in the College. 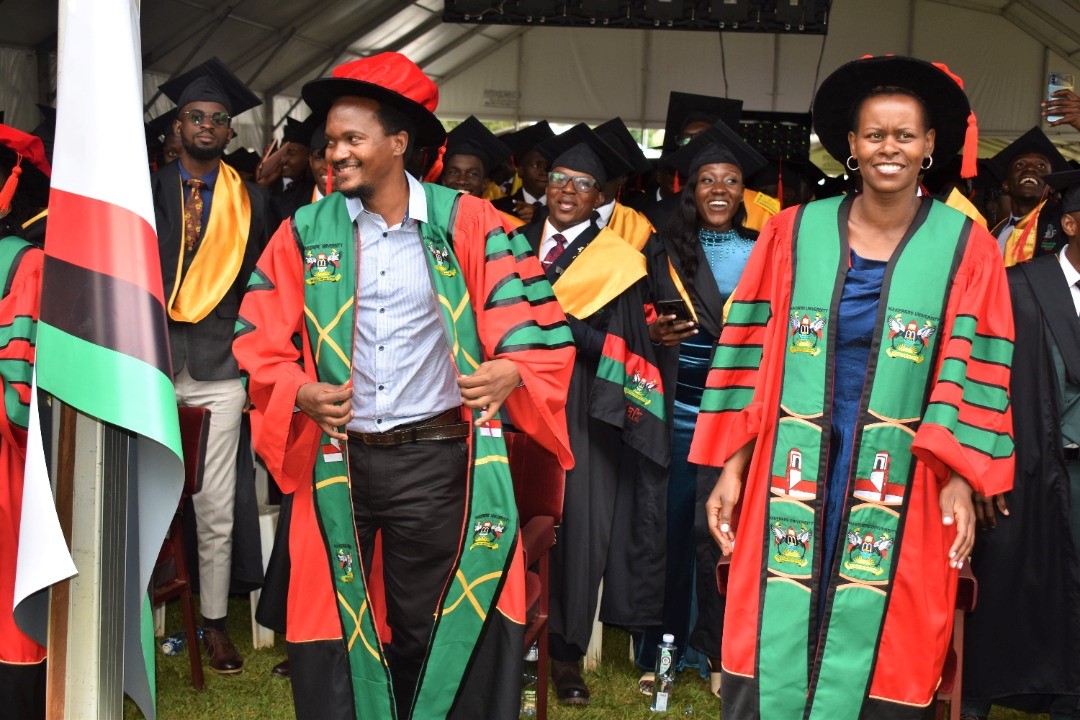 Dr. Pellegrine Sebulime (L) and Dr. Namayanja Monica (R)/ Courtesy Photo.
While presiding over the ceremony, The Chancellor, Prof. Ezra Suruma congratulated the graduands and commended them for the spirit of hard work, endurance and self- control. Your graduation, he said, testifies to the world that in the face of all adversity, poverty, deprivation, doubt and even danger, you possessed the determination to strive on, to rise after the fall and today you are counted among the survivors. He advised the students to serve above self as they go out into the work environment. 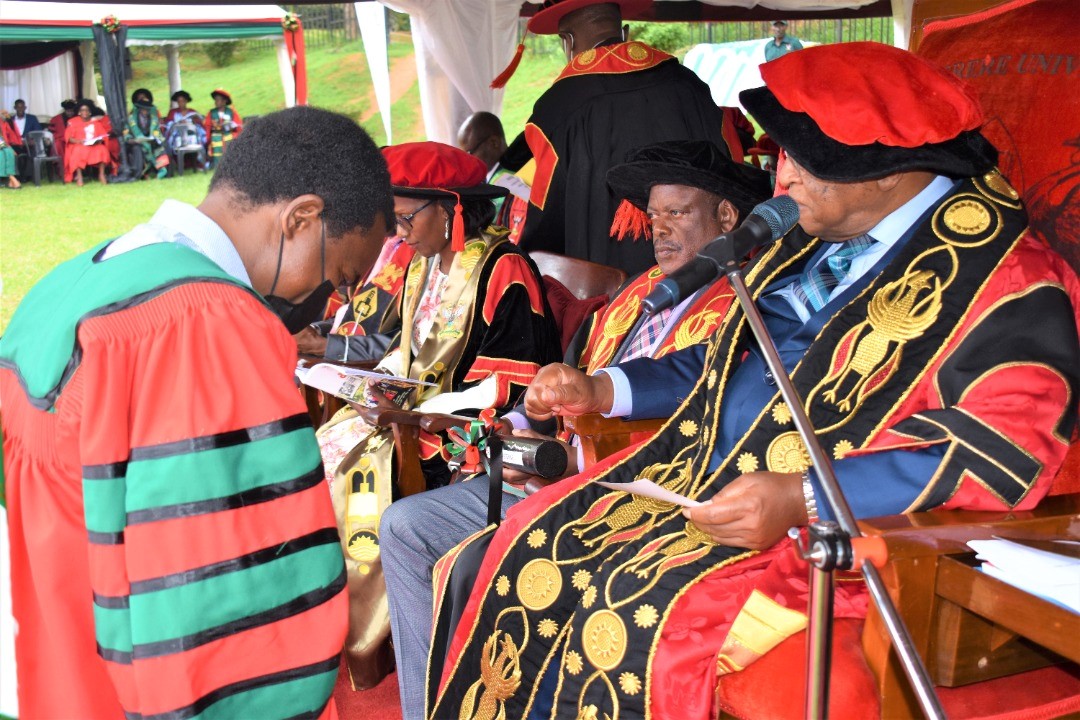 In his advice to the graduands about being innovative, Prof. Suruma said despite the risks and high costs of innovation and creativity, it was the true path to leadership. It is only through innovation that you will stand out of the crowd,” he emphasized cautioning then that there would be a number of setbacks that should not derail them citing the example of Thomas Edison, the inventor of the light bulb who made close to 1000 unsuccessful attempts.’’ I didn’t fail 1,000 times. The light bulb was an invention of 1,000 steps.”

In his remarks the event, Prof. Barnabas Nawangwe, the Vice Chancellor of Makerere University noted that the Covid -19 and Lock down period was challenging in as far as academic progress was concerned and commended the students for the perseverance and the new normal, a period they went through.
He said Makerere was steadily moving towards the realization of its goal of becoming a research led university and boasted of a number of high ranking staff with more than 1000 academic staff holding PhDs and attaining 2 nd position in Africa in as far as Research was concerned. 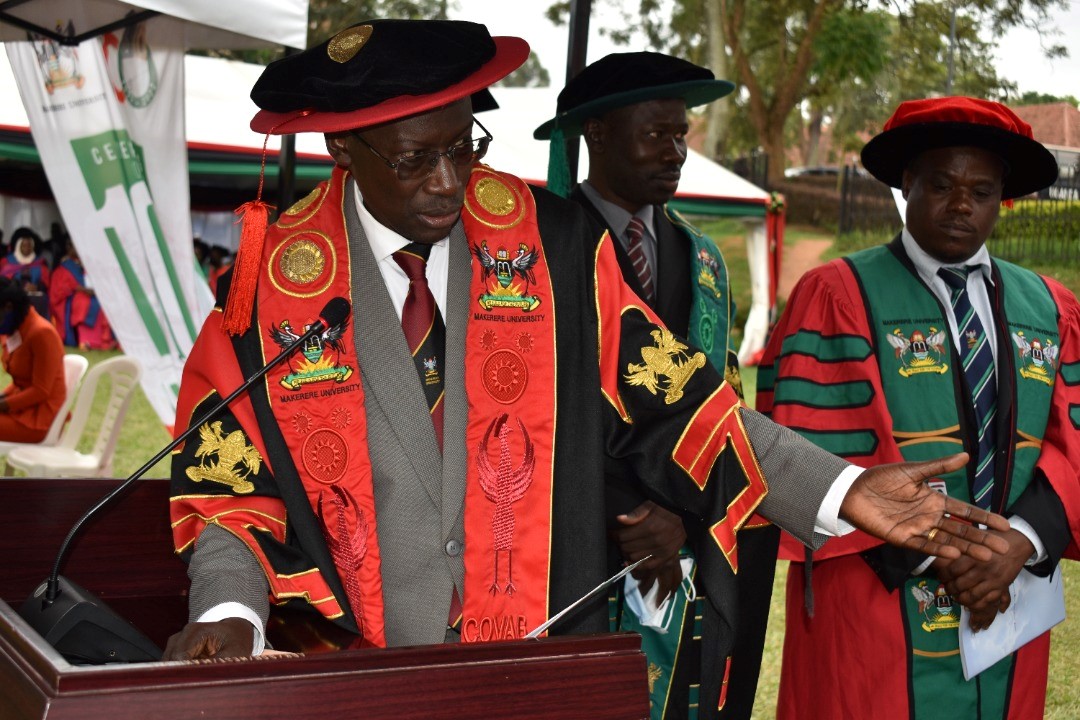 From the College of Veterinary Medicine, Animal Resources and Biosecurity, the Vice Chancellor noted that the College was research alive as evidenced from the Centre for Bio Security and Global Health (CEBIGH), which was established at the College following a directive from H.E, the President as a shared facility for scientists and researchers critical in the development of drugs and vaccines as a solution to minimize and end existing or emerging diseases that distress humans, animals, plant life and the entire ecosystem. 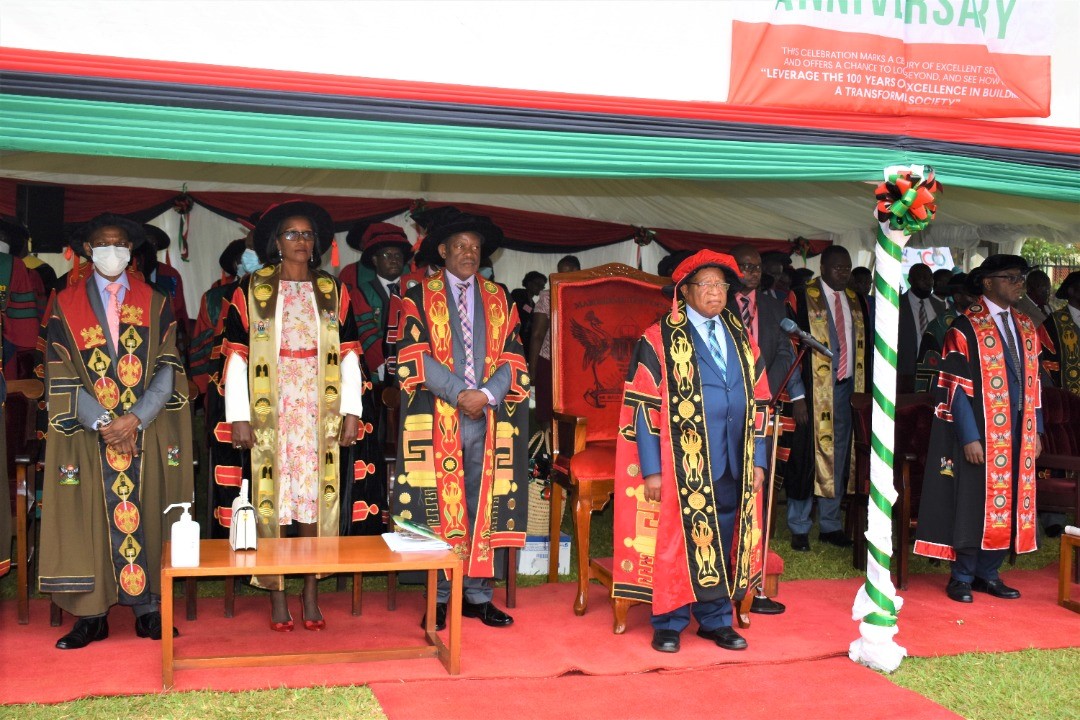 VC Prof. Nawangwe (2nf R) flanked by the Chair Council Mrs. Lorna Magara (2nd L) at the 72nd Graduation Ceremony/Courtesy Photo.
Prof. Nawangwe noted that the centre provides strategic services to scientists and researchers in the trial units to test the efficacy of drugs and vaccines, citing the example of the anti-tick vaccine which was said to be at phase two of the clinical trials in the center.

He mentioned that the Africa Institute for strategic Animal Resource services (AFRISA) had been identified to support the Government of Uganda in the
Development of the Parish Development Model program that seeks to transform the subsistence households into the money economy.

In the area of partnerships, Prof. Nawangwe noted that the College of Veterinary Medicine, Animal Resources and Bio Security was the first to collaborate with
Universities in Somalia, South Sudan, the DRC and Mozambique to help them grow their human resource and develop their research capacity.

In another development, the Vice chancellor informed the gathering that the reconstruction of the Main Administration Building had started following
Government release of 21 Billion Uganda Shillings. This, he noted, together with other infrastructural projects going on in the University would cost the Government of Uganda 100 Billion shillings. 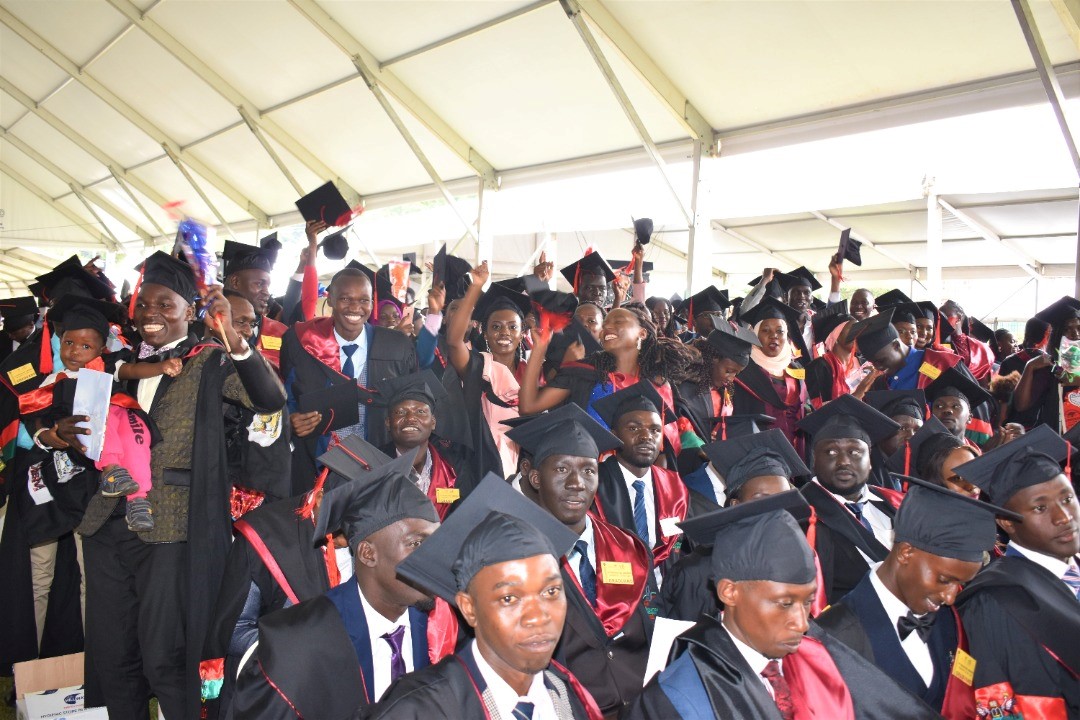 A worthy jubilation, Congratulations Covabians, we are proud of you.