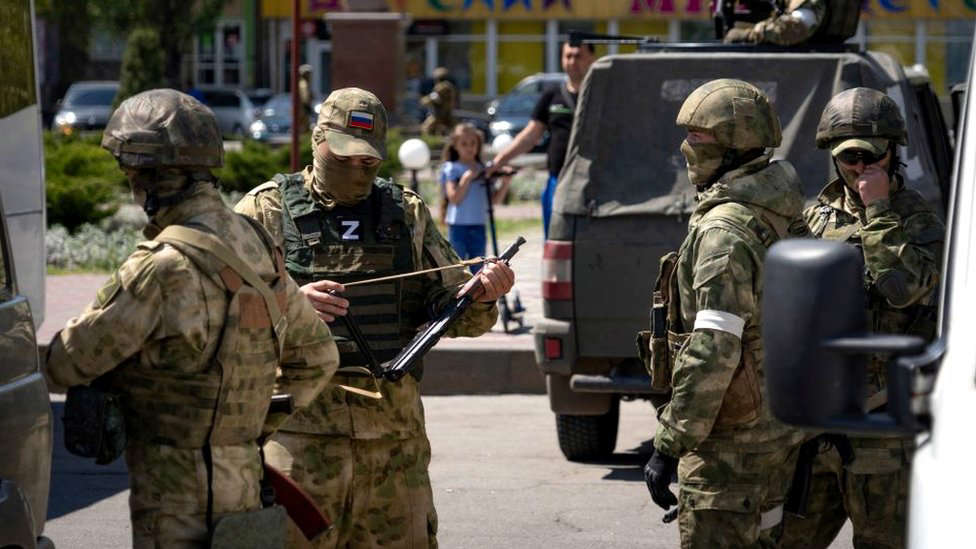 Russian forces met fierce resistance from residents when they arrived in the southern Ukrainian city of Melitopol in February.

Locals tried to block armoured vehicles as the convoy of soldiers rolled in to occupy the city, and people flooded the streets waving Ukrainian flags.

When the Russians started cracking down on the protesters, the resistance movement was forced to evolve and new groups emerged.

Melitopol, according to the US-based Institute for the Study of War, is an area where partisan warfare has been active since at least the middle of March.

Ukraine’s Military Intelligence Directorate has reported that from 20 March to 12 April “partisans eliminated 70 Russian soldiers during their night patrol”.

These groups are continuing to carry out attacks.

Last Wednesday a Russian armoured train was reportedly derailed. Days earlier, two Russian soldiers were found dead in the street. Last month a bridge near Melitopol – used to deliver supplies to the Russian army – was blown up.

Ivan Fedorov, the mayor of Melitopol, says these attacks were organised by partisan groups. “It’s the job of our partisans, our secret services and our soldiers. They do this job together,” he tells the BBC.

Mr Fedorov himself was abducted by Russian forces and later released as part of a prisoner exchange.

The Russians are desperately trying to crush all resistance. They are searching houses and detaining people, residents say, often at random.

On 29 April, armed men in military uniform with white armbands – the marking used by Russian soldiers – abducted Boris Kleshev, the head of a local fire brigade in Melitopol.

For two weeks his relatives heard nothing about his whereabouts. A few days ago, a pro-Russian Telegram channel posted a video showing Mr Kleshev and other Ukrainian men admitting that they were sharing information on Russian movements with the Ukrainian military.

Gallery: Mariupol defenders surrender to Russia but their fate is uncertain (Reuters)

1 of 30 Photos in Gallery©Provided by Reuters

Service members of the Ukrainian armed forces, who surrendered at the besieged Azovstal steel mill in Mariupol, sit in a bus upon their arrival under escort of the pro-Russian military in the settlement of Olenivka in the Donetsk region, Ukraine, May 20, 2022. REUTERS/Alexander Ermochenko

Mr Kleshev was speaking with a low voice, clearly under duress. But even if it looked like a forced confession, those who made the video were unlikely to have cared – their aim is to break the resistance spreading through Melitopol.

These resistance groups, however, are only a small part of the movement.

“Ninety per cent of Melitopol residents are now partisans and they resist in their own way,” says Svitlana Zalizetska, a local journalist.

“Some people just stare at the Russian soldiers with hatred. Others sing patriotic songs at night. Some people hang posters in the street with Ukrainian flags,” she says, adding that some also pass on information about Russian military movements.

At the start of the invasion in February, Melitopol residents organised mass protests against the Russian army’s presence. People regularly took to the streets with Ukrainian flags, chanting: “Melitopol is Ukraine.”

“Russian forces were truly shocked to see that the local population was not happy to see them. Those soldiers really believed that they were liberators,” says Iryna (not her real name), who lives in Melitopol.

A few weeks after the invasion, police from Rosgvardia – Russia’s national guard – arrived to crack down on the protests. They started dispersing crowds and detaining activists.

But Russian troops appear to understand that defeating the resistance here requires more than just stopping the rallies.

Unlike other regions occupied by Russian forces, the military in Melitopol have been trying to win people’s hearts and minds. “We have the brand of ‘polite people'”, Iryna jokes, referring to the term used to describe Russian soldiers when Moscow annexed Crimea in 2014.

“These are ordinary guys who look like us and try to be nice,” she explains. “They help elderly women and show that they care about people. But they can’t realise that it was them who created all these troubles and that our people didn’t beg for help before.”

In order to create a perception of normality, the Russian forces try to silence anyone who openly opposes them.