Isingiro, Western Uganda: Caritas Uganda joins the vehicles of other Civil Society Organizations in interventions meant to restore environment that is deteriorating each day. 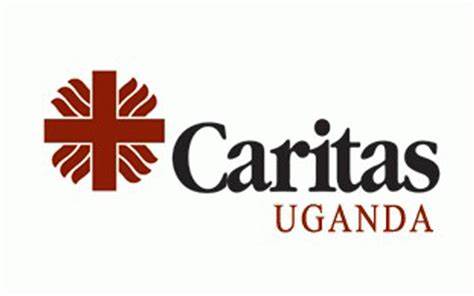 It’s just two weeks after the enter world commemorated the International Earth Day on 22nd/April/2022 under the theme “Invest in Our Planet” after realizing both human and behavior of nature have impacted heavily on deterioration of environment.

In Uganda, Caritas Uganda joined other CSOs like Oxfam in Uganda, Community Integrated Development Initiative, CIDI, The Uganda Farmers’ Common Voice Platform, The African Climate Reality Project, CSBAG, Joint Efforts to Save the Environment, (JESE) and others to celebrate the day in Western Uganda based Isingiro District on 22nd/April/2022.

The Day comes a time when Oxfam in Uganda, the host organization and Care International Uganda are implementing a 2 year Disaster Risk Management Project with funding from European Union Emergency Trust Fund for Africa (EUTF) aimed at restoring the environment that is ever deteriorating in the area and Caritas Uganda commits to move together with them. 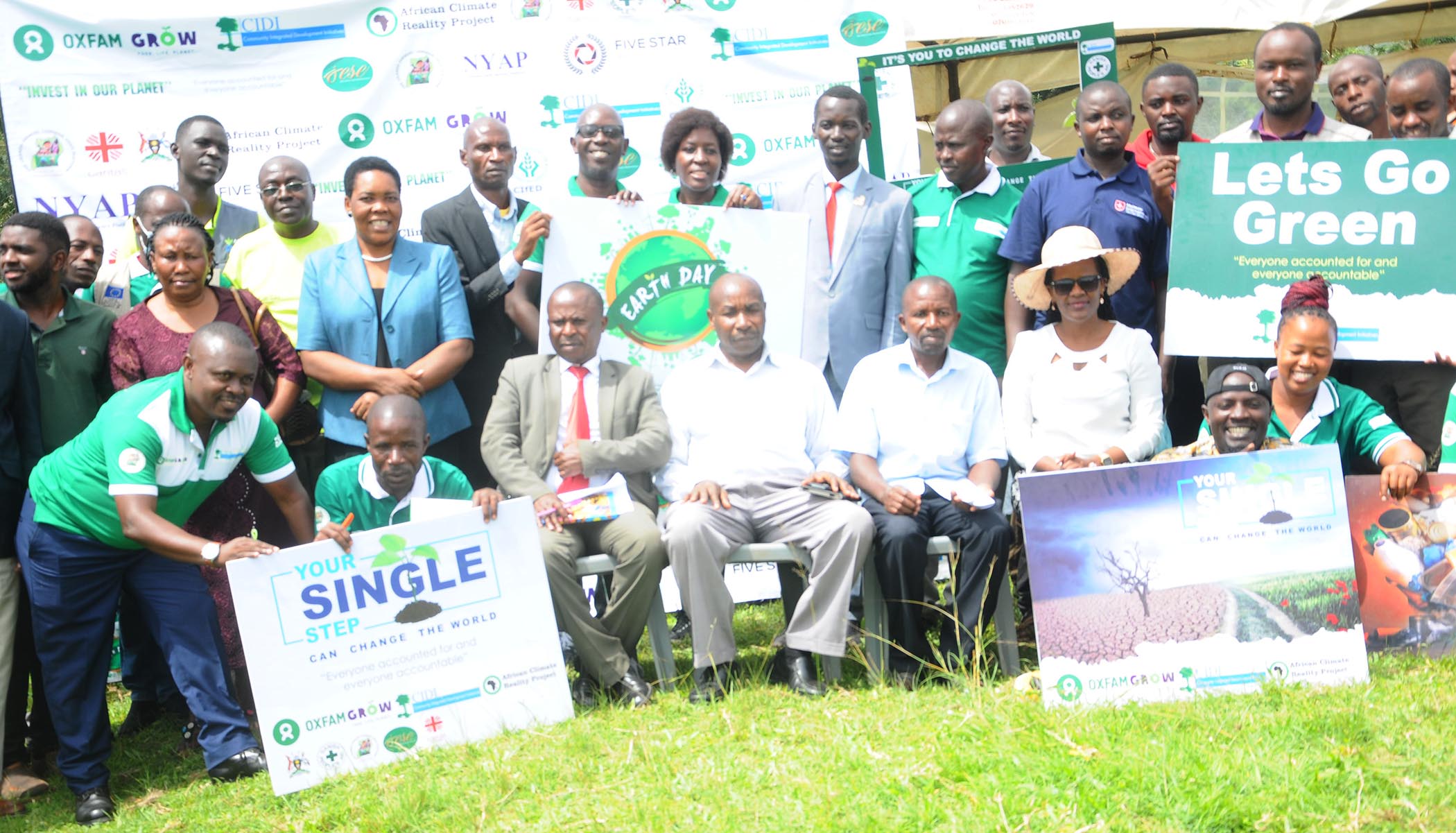 Members of Civil Society Organizations pose for a group photo with officials of Isingiro District after the International Earth Day cerebrations at District Headquarters on Friday. Photo by Julius Mugaga Tukacungurwa.

However with growing attack on the environmental setting that has culminated into disasters like floods, mudslides, prolonged drought, death of wildlife, greenhouse gases and others Caritas Uganda is investing heavily in interventions aimed at averting this. 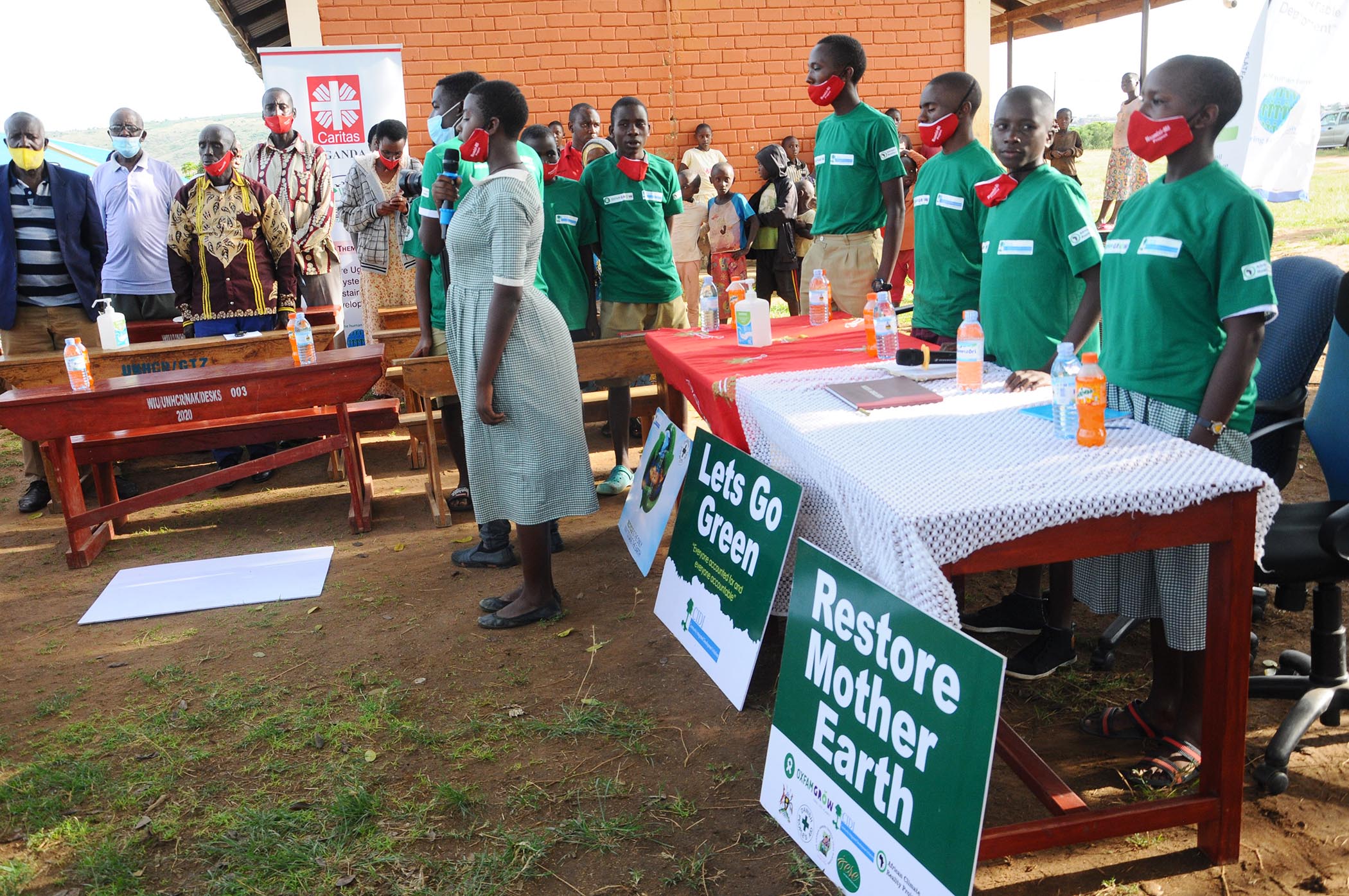 Pupils of Kabazana Primary School, Members of CSOs and School management honor anthems ahead of a debate on the factors of Climate Change and way forward. Photo by Julius Mugaga Tukacungurwa. 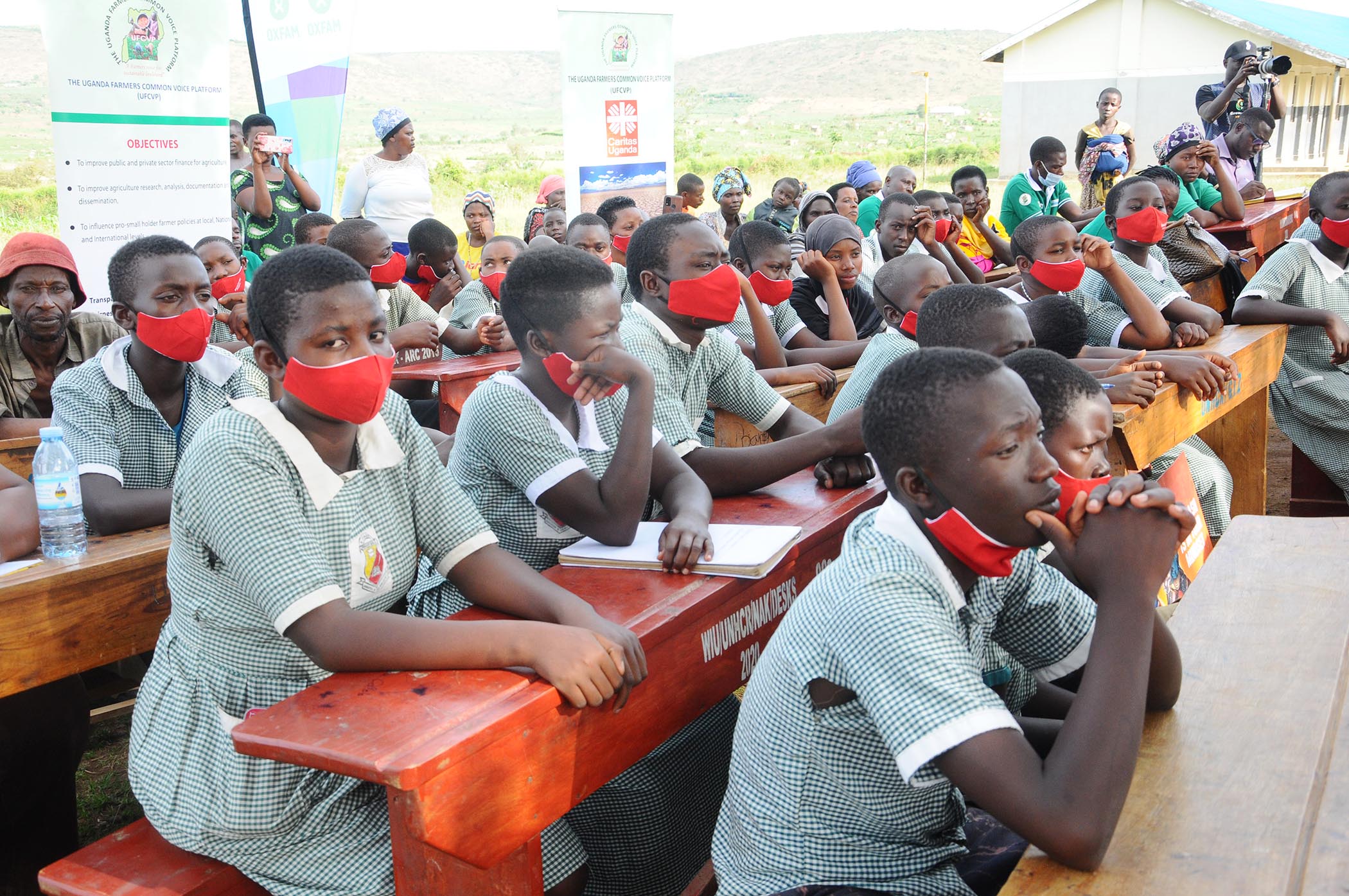 Pupils of Kabazana Primary School listen attentively during of a debate on the factors of Climate Change. Photo by Julius Mugaga Tukacungurwa

It should be remembered that on 24th May 2015, the Pope released an encyclical/document codenamed Laudato si’ with a subtitle “on care for our common home” and the call is celebrated every year to awaken people around the globe to take responsibility of the beautiful gift Almighty God granted to man.

This year’s Laudato Si’ week will be held from May 22-29, 2022 to mark the seventh anniversary of Pope Francis’ landmark encyclical on creation care.

This global celebration will unite Catholics to listen and respond together to the cry of creation, rejoice in the progress reached in bringing Laudato Si’ to life, and intensify efforts through the dynamic Laudato Si’ Action Platform, walking the “Synodal” path.

Betty Rose Aguti, the Policy and Advocacy Specialist at Caritas Uganda and the national coordinator of The Uganda Farmers’ Common Voice Platform during the Earth Day celebrations in Isingiro District cites the need for collective efforts using advocacy for CSOs, positions of influence for civil servants, religious institutions for faith leaders all with one voice of having a habitable environment. 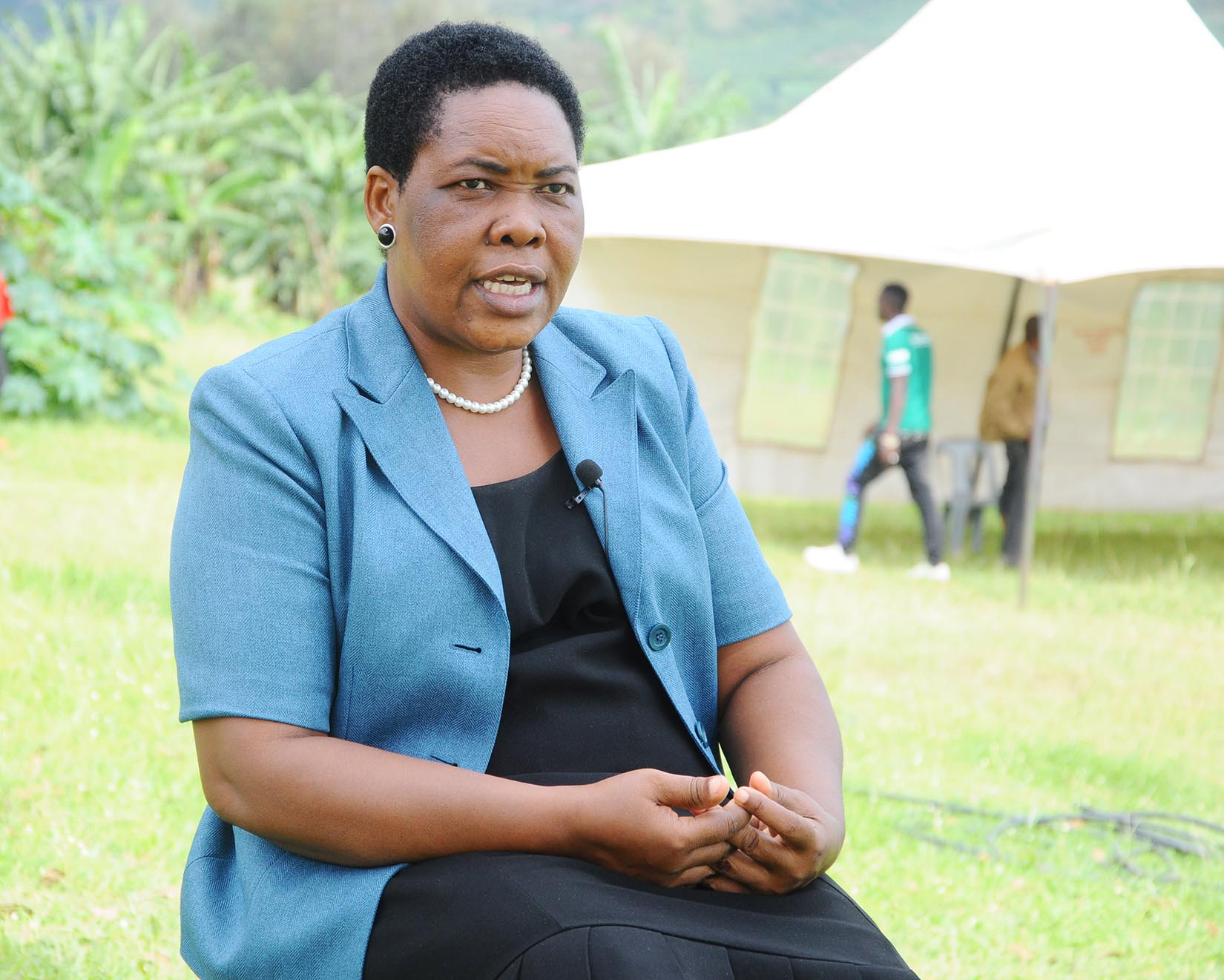 She went on to call for behavior change amongst the population in that they should have proper management of waste like plastics as they toxic to the environment when littered anyhow.

She however believes that it’s a responsibility of Civil servants, CSOs and Community Based Organizations to mobilize the population on the beauty of having a habitable environment and how.

With climate crisis at hand, Betty informs that Caritas Uganda and The Uganda Farmers’ Common Voice Platform have involved themselves in different actions like educating farmers on the use of clean energy-charcoal saving stoves, partnering with Denmark for ECOCA Solar cook stoves in Bidi Bidi and Parolinya Refugee settlements, teach farmers and the community to plant trees and do best farming practices that respect environmental setting.

Bwengye Emmanuel, the Isingiro District Natural Resources Officer informs that the district being one of those affected by climate crisis, they have started on activates like greening hills (planting trees on hills), institutional greening (planting trees on different institutions like churches, local governments, schools and others), restoration of ecosystem and fragile areas, road reserve tree planting, agro-forestry and bee keeping, fish farming, restoring energy like use of charcoal saving stoves, use of biogas all of which clean cooking ways. 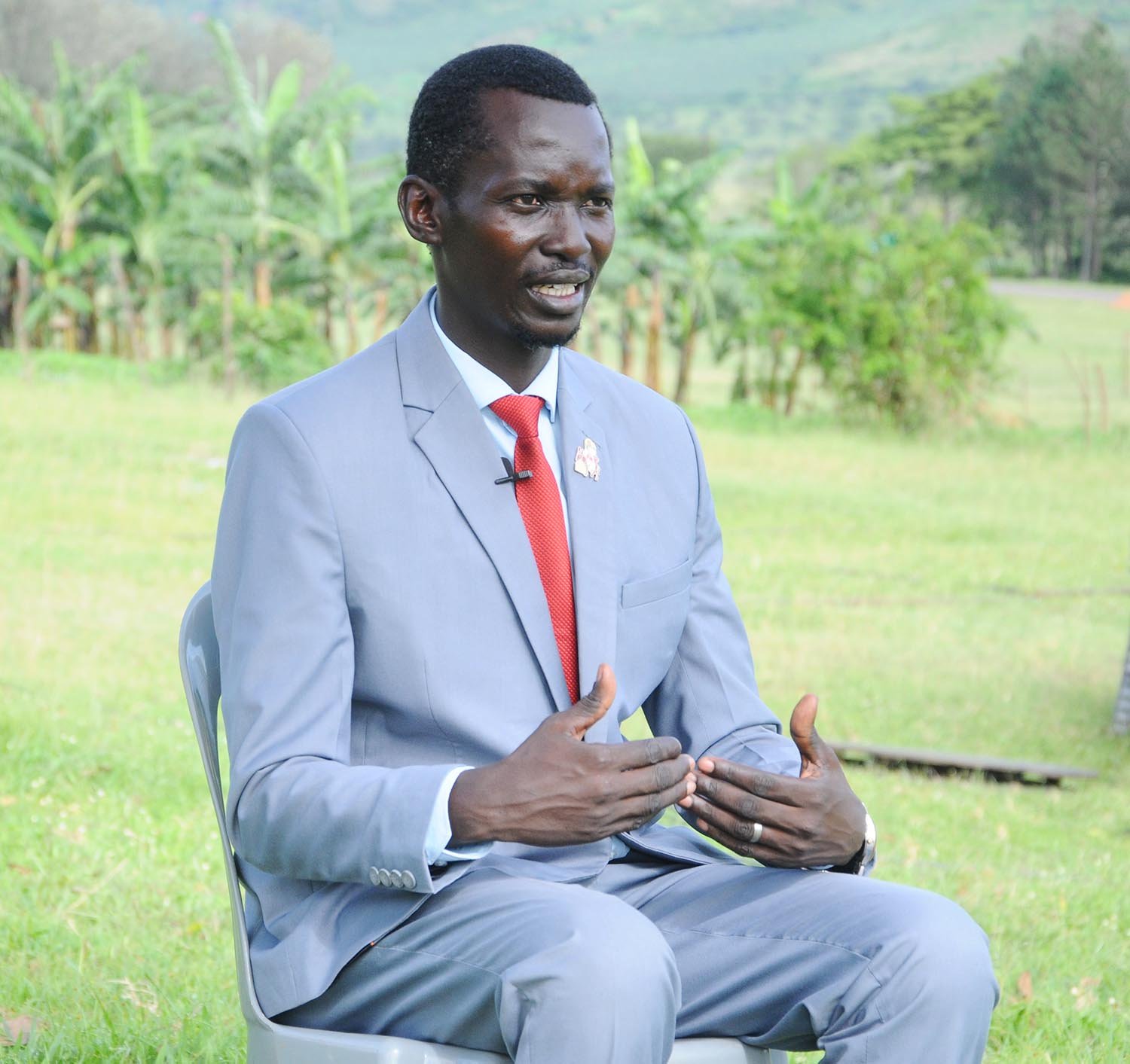 Bwengye Emmanuel, the Isingiro District Natural Resources Officer speaks during a one on one interview. Photo by Julius Mugaga Tukacungurwa.

He believes the climatic crisis that has resulted into catastrophes like drought, floods from hills, global warming due to direct sunlight as a result of direct sunlight will surely be averted as they spread all the above activities all over the district.

In that week of cerebration, CSOs in partnership with Isingiro District Local Government conducted a series of a activities aligned to Earth Day these included,

Plastic audit in Isingiro Town Council where over 100kgs of plastics were collected and advised locals exhibiting proper disposal of wastes by adopting the 4Rs (Refuse, Reduce, Reuse & Recycle).

They also planted over 300 trees at Nakivale Refugee Settlement based  Kabazana Primary School and about over 100 trees at Isingiro District Headquarters. 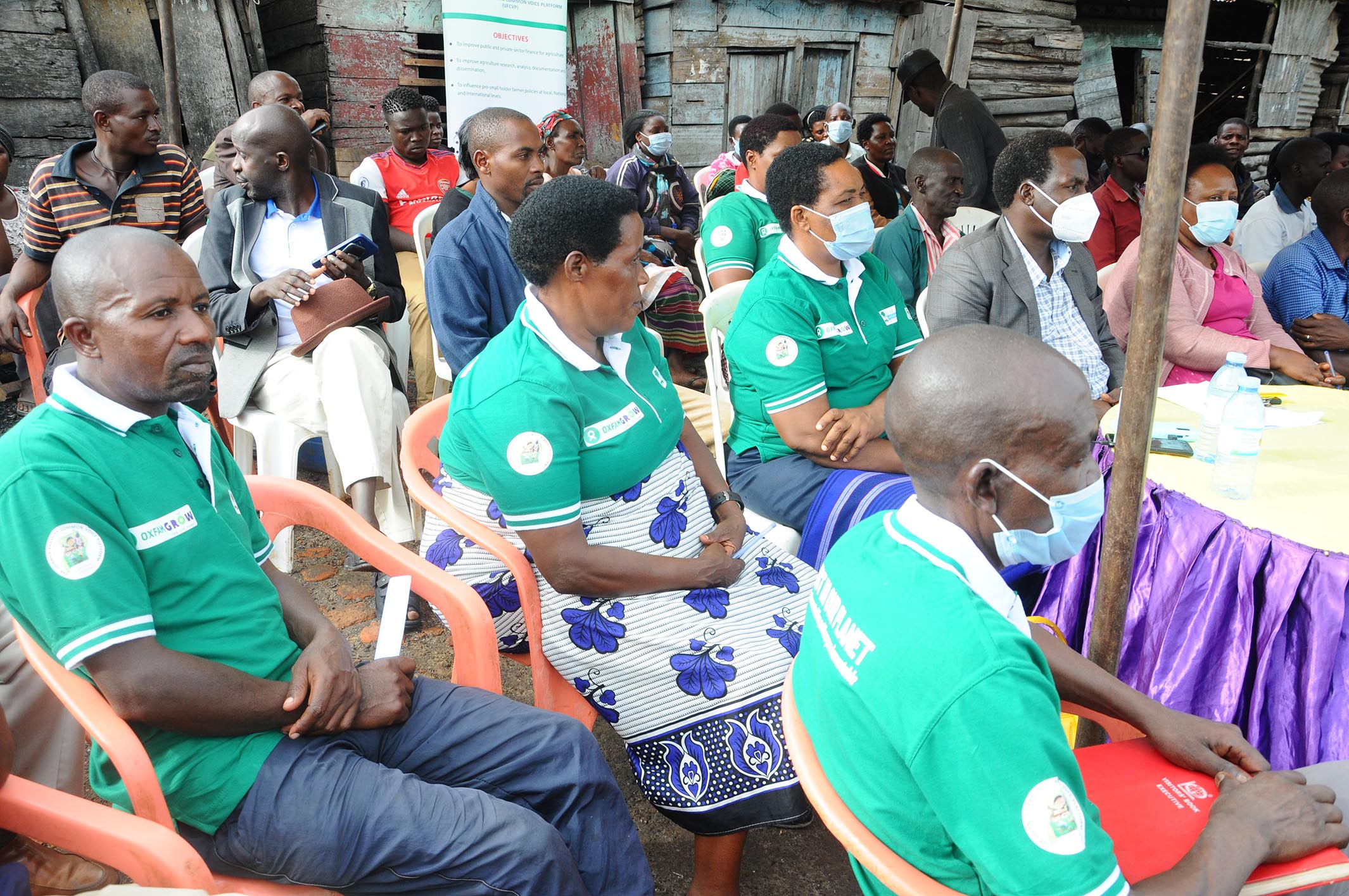 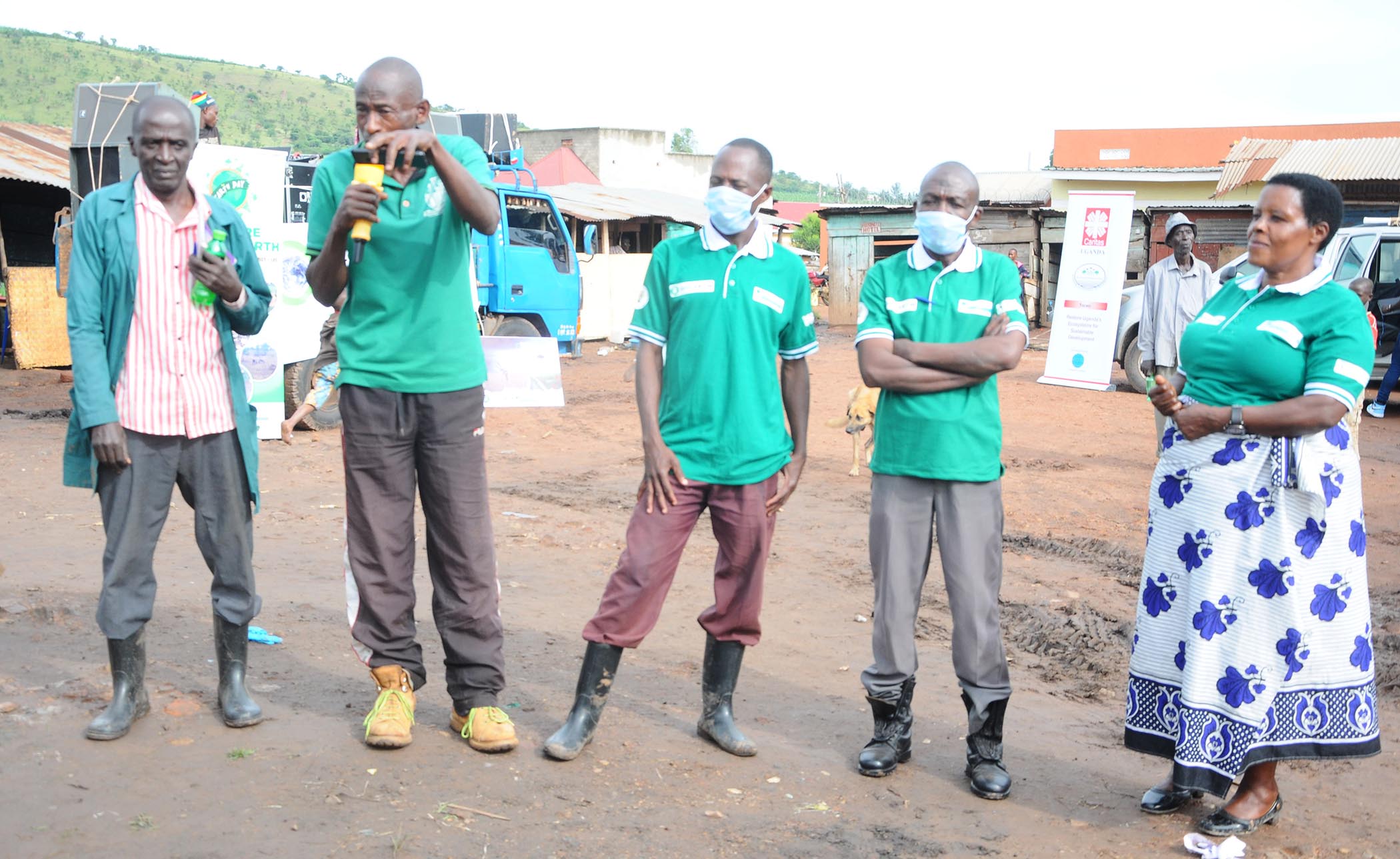 Locals make inquires from the didtrict officials during the community dialogue at Ruhingo Daily Market on possible actions to avert climate crisis in Isingiro District. Photo by Julius Mugaga Tukacungurwa

On the same day, pupils of the school debated the motion “Population increase is the main reason for environmental misuse” and cited different factors that have been catastrophe to mother earth like bush burning, industrialization, lumbering, scramble for settlement land, encroachment on wildlife, others like lack of environmental education amongst the public, earthquakes, landslides, prolonged drought and others.

The other activity was community dialogue that was conducted at Ruhingo Daily Market in Isingiro Town council and among other things,

the community sought it would be better for everyone in the district to be mandated by law to plant trees because some of them do but others remain adamant about it.

The community questioned the laxity of the district authority in enforcing existing laws on safeguarding the environment that has costed them leading to climatic hazards.

These offered themselves for involvement in all activities geared to avert climate crisis like tree planting, re-afforestation, saving buffer areas, proper disposal of wastes and others. 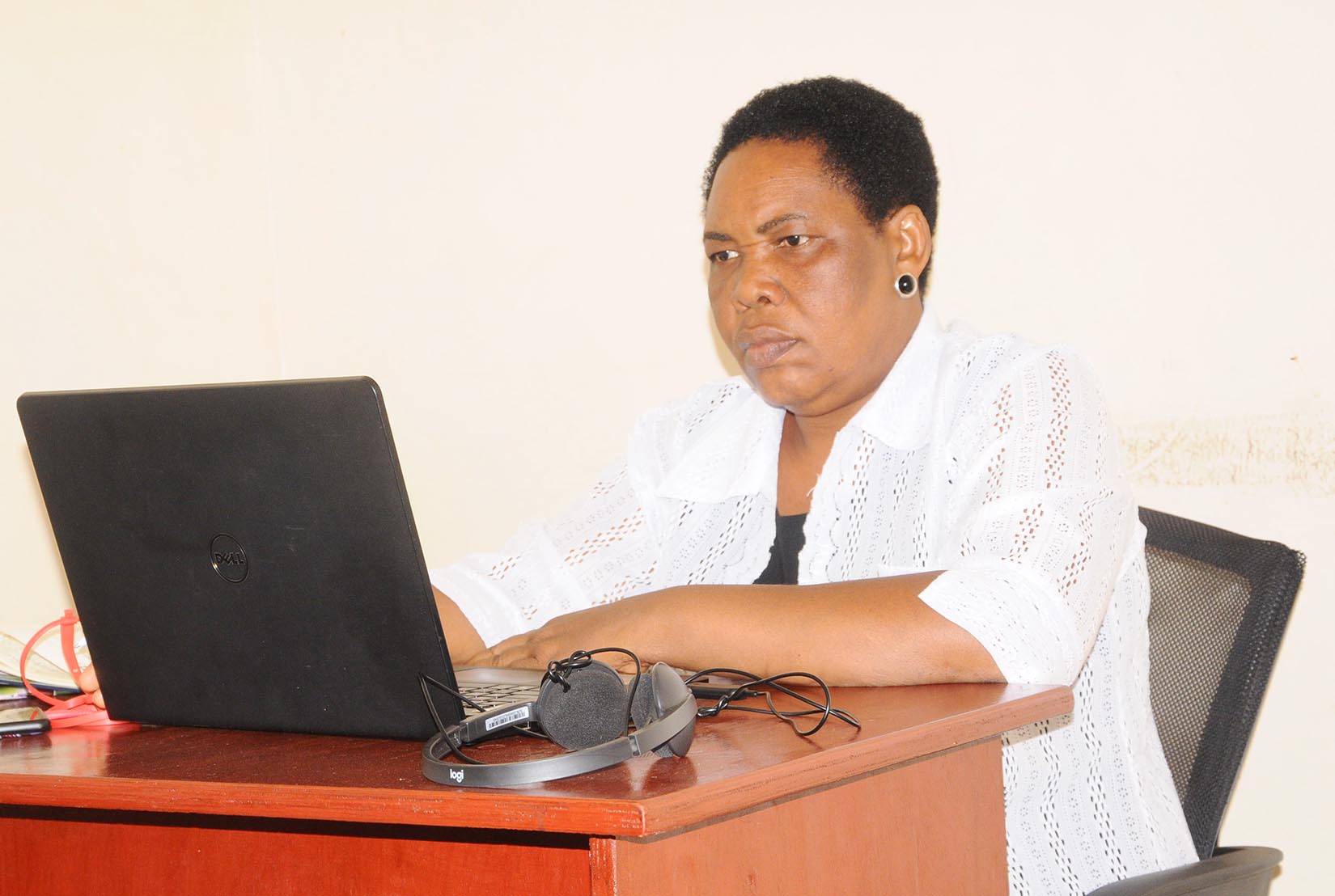 Betty Rose Aguti, who doubles as the Policy and Advocacy Specialist at Caritas Uganda and National Coordinator of The Uganda Farmers’ Common Voice Program moderates the Webinar in Isingiro District. Photo by Julius Mugaga Tukacungurwa

The CSOs also conducted a webinar under the topic “Multi-stakeholder Discourse on Climate change and Restoration of Mother Earth”, organized by Community Integrated Development Initiative, CIDI moderated by Betty Rose Aguti, who doubles as the Policy and Advocacy Specialist at Caritas Uganda and National Coordinator of The Uganda Farmers’ Common Voice Program.

In the webinar, stakeholders cited many spaces worth bridging if Uganda is to answer the climate crisis question.

Limited funding from the central government was in as this limits implementation of existing laws, by-laws, ordinances, environmental protection, law enforcement and others and they recommend that climate financing would be critical for the country.

They also notice that lack of transparency on how the little funding is disbursed to the local government that end up costing the country opportunities of funding globally so they advocate openness in the utilization of the little climate funding as the government pushes for more.

They recognize that there is need for sensitivity of the August House not to pass any budget that is not sensitive to environmental related issues as this will greatly help to restore the deteriorating Mother Earth. 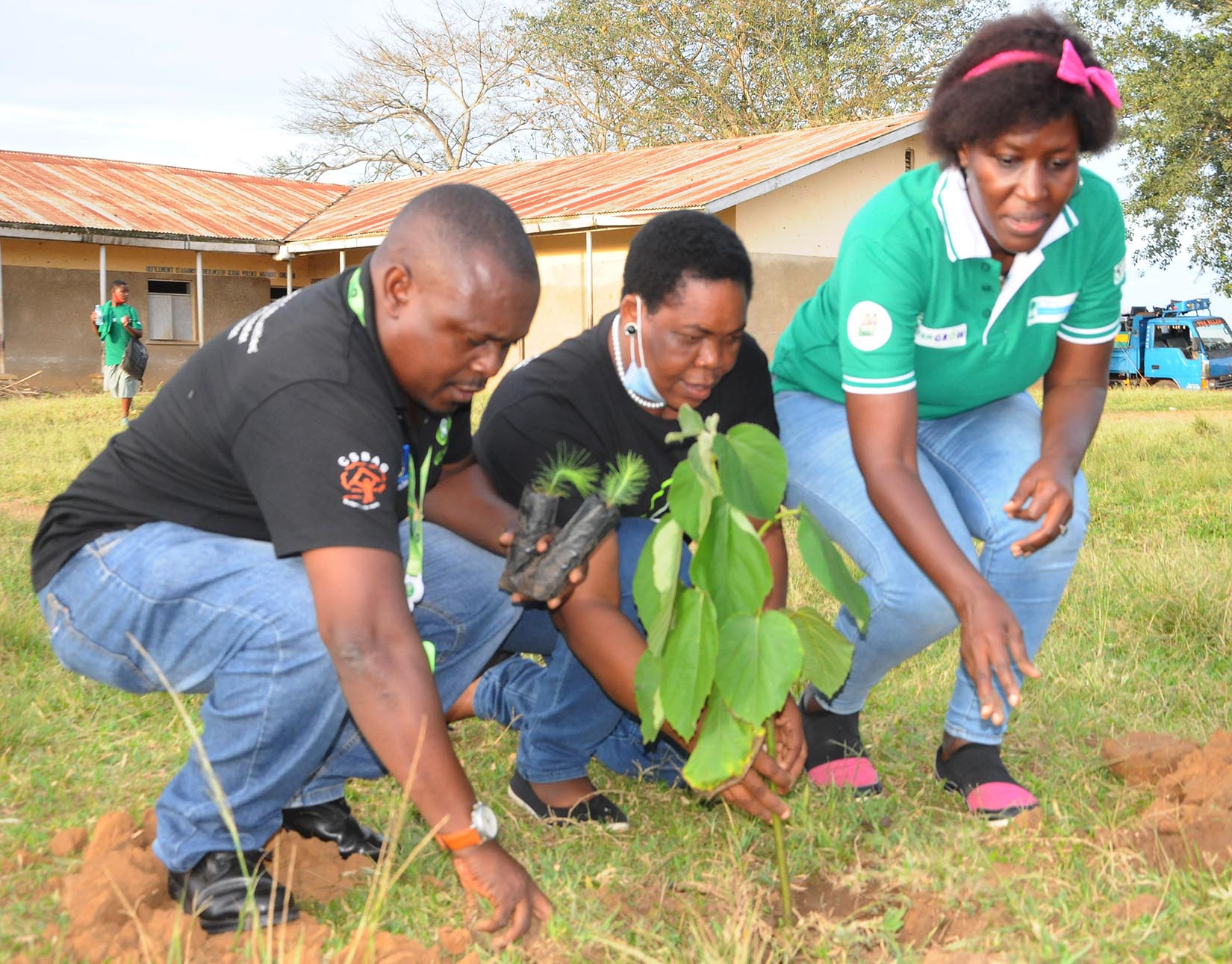 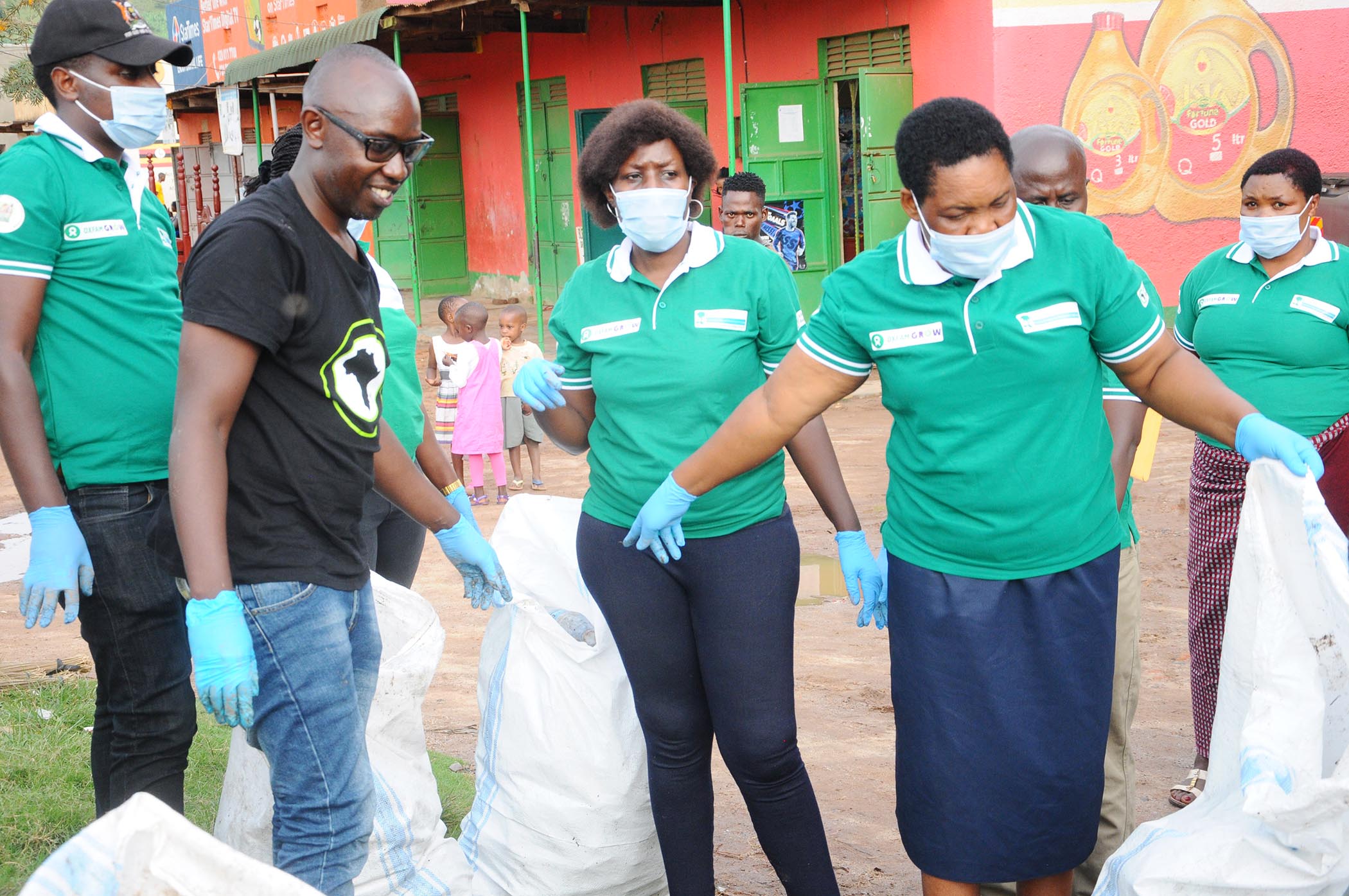 They recommended that the private sector should ensure capital is invested in green solutions are in place as well their cooperate social responsibility should suit/be environment friendly.

There should be youth empowerment by employing them in form of technologies for adaptation, mitigation actions like planting trees, clean energy, and waste recycling and others, the cited.

Clean energy is the other major issue they centered on as this is pivotal in restoration of energy like use charcoal saving stoves, use of briquettes instead of wood fuel, biogas and ethanol.

Communities as the starting point for all activities geared to restore the environment, engagement into best farming & behavior change actions like agro-forestry, re-afforestation, tree planting, proper disposal of wastes, avoidance of “Kaveera use”, avoid encroachment on buffer areas and others.

Synergies between CSOs and government’s MDAs in fighting, devising adaptation ways and mitigation of tackling the climate crisis should be at the center point.

Capacity building of the community members, providing incentives to the members of the public in a bid to attract them to the cause, taking action as well having information in familiar dialects will stir the movement.