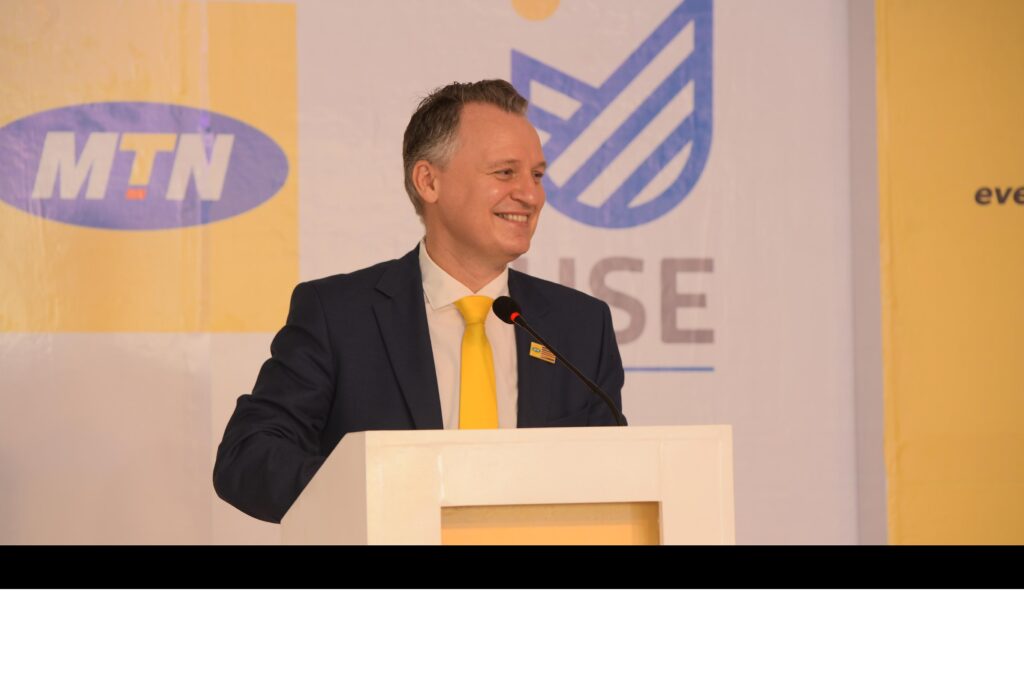 File Photo caption: Wim Vanhelleputte, MTN Uganda CEO smiles with triumph after successfully onboarding the telecom onto the Uganda Securities Exchange. The CEO spearheaded a robust roadshow and marketing campaign involving over 300 town halls, hundreds of media engagements in Uganda and Kenya, managing to raise $150million. The goal of the IPO, which was to boost local participation was attained as the telecom registered 87% Ugandan investors and boosted the stock exchange with over 65,000 new SCD accounts opened during the period. MTN started trading on December 6th and registered a 2.5% jump in its share price on its first day of trading

The value of MTN shares which started trading on the Uganda Securities Exchange (USE) on Monday has soared by 2.5% from UGX200 to UGX205. The price today remains above UGX200. An increase in share price means an increase in value of the stock one holds in a company.

Aeko Ongodia, Chief Executive Officer, Xeno Investments says it is too early to diagnose the rationale of the price jump but notes that it is a common occurrence for newly listed companies to experience a share price jump.

MTN Uganda officially listed onto the USE during the bell ringing ceremony symbolizing the commencement of trading on the stock market at an event held in Kampala on Monday.

The listing follows a series of events spanning over a six week period during which the telecom giant announced the offer of its shares to the public. MTN Uganda floated 4.4billion shares to the public at an offer price of UGX200 each, in a bid to ensure local participation.

The telecom subsequently combed all corners of the country to encourage ordinary Ugandans, “omuntu wa bulijjo’ to participate in the MTN IPO. Over 300 town halls and multitudes of media engagements through radio and television aimed at sensitizing the population about the stock market and in particular the MTN IPO were held.

The offer period opened on October 11 and closed on November 22. MTN Uganda through its robust marketing and investor education strategy raised $150million (UGX535Billion) with 2.9billion shares allocated to the public.

According to the MTN Uganda Chief Executive Officer, Wim Vanhelleputte, the IPO was a success as it achieved the main goal which was to ensure local participation and ownership by Ugandan investors who share in the company’s growth story.

“This IPO has raised UGX535billion and that is more than double the previous record on the USE. We have convinced more than 20,000 Ugandan retail investors to participate in the IPO which is also higher than the performance of the previous IPOs. We have convinced 65,000 Ugandans to open SCD accounts. The ownership of the company has grown from only 4% Ugandan ownership to almost 15% so it is an amazing success for MTN,” Vanhelleputte said.

Of the 21,394 applicants for MTN shares at IPO stage, 20,894 were Ugandan. For emphasis, 87% of the total shares allotted were to Ugandan investors.

In addition, MTN had a significant impact on the USE.  For example, it more than doubled the number of Securities Central Depository (SCD) accounts which are a prerequisite for participation on the stock market.

Over 70,000 SCD accounts were added onto the stock market during the MTN IPO Offer period compared to slightly over 30,000 accounts which were in existence previously. The increase in SCD accounts is largely attributed to the digitalization of the SCD account opening by the telecom.

The MTN m-IPO platform allowed users to register for an SCD account using their phones in the comfort of their homes regardless of whether it was a basic, feature or smartphone.

With the extensive investor education that MTN Uganda undertook, and the convenience that it introduced to the stock market, we hope for improved activity at the USE.