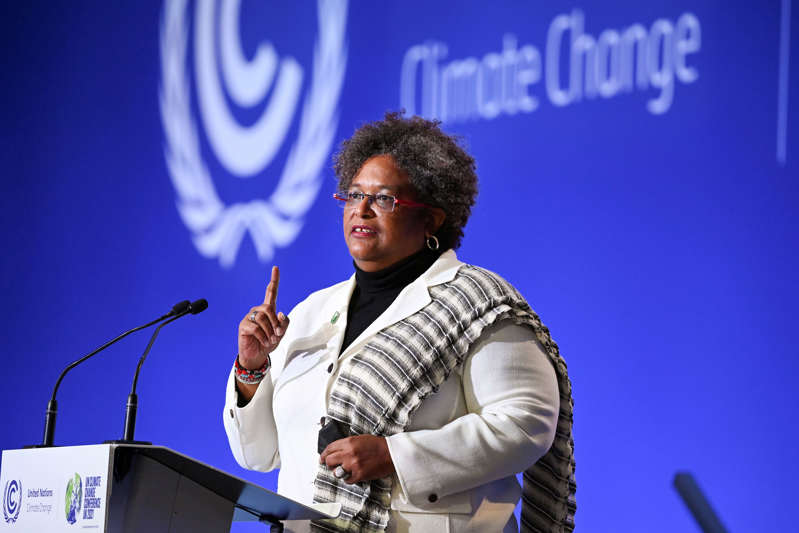 © Reuters/POOL COP26 in GlasgowLast month, Mottley at the UN Climate Summit in Glasgow called for $500 billion in annual issuance of Special Drawing Rights, an IMF currency, to finance a transition to renewable energy and limit the rise in global temperatures.

© Reuters/POOL COP26 in GlasgowWithout such financing, small countries would have to borrow to pay for the mitigation of climate change that has principally resulted from carbon dioxide emissions in the world’s major nations, Mottley said in an interview at the Reuters Next conference on Friday.

“The moral position has always been that the polluter must pay,” she said. “Now what’s the reality? The G20 countries have contributed 80 percent of greenhouse gases and have contributed virtually nothing” to help finance mitigation efforts.

The International Monetary Fund did not immediately respond to a request for comment.

Mottley has in recent months emerged as a voice for island nations that face the greatest risks from global warming.

Rising temperatures and sea levels are already affecting Barbados by shrinking its already-limited water supply, forcing villages to relocate from the coastline, and contaminating existing freshwater reserves with sea water.

Guaranteed financing for climate adaptation will help limit temperature increases to 1.5 degrees Celsius above pre-industrial levels, she said, referring to what scientists call a threshold for preventing severe effects of climate change.

“This thing has the ability to undermine our societies fundamentally and let us find a way, therefore, of adapting to this new reality,” she said. “It will require funding, and we don’t feel that all of the sudden it should come as debt, quite frankly, because we didn’t put ourselves here.”

The IMF this year issued $650 billion in Special Drawing Rights in its largest-ever such allocation as part of its response to the economic effects of the pandemic.

Mottley has noted that central banks of the world’s wealthiest countries have in the last decade injected $25 trillion into their economies as part of monetary stimulus efforts known as “quantitative easing.”

She has argued that similar amounts should be invested in adapting to climate change.

“Bottom line is, however, that the time lines that we have to adapt are not very long,” she said. “And therefore we say let’s at least take the funding issue out of it and provide greater levels of certainty for it.”