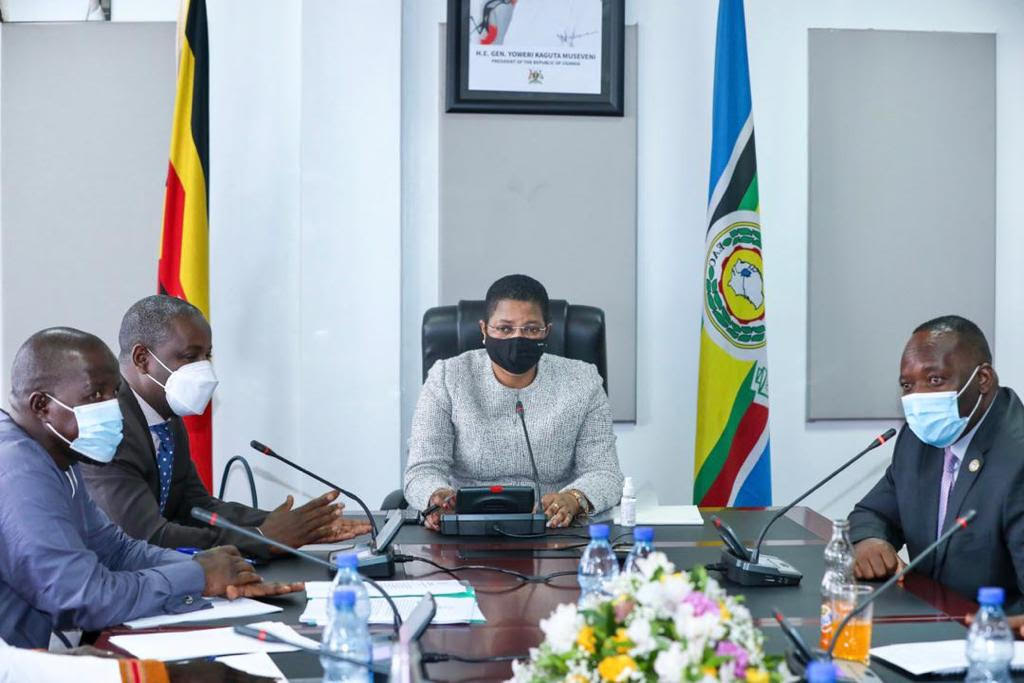 The Deputy Speaker of Parliament, Anita Among; the Leader of the Opposition in Parliament, Mathias Mpuuga; the Government Chief Whip, Thomas Tayebwa and the Parliament team captain, Asuman Basalirwa, in a meeting with captains and coaches of the parliament sports teams.

The Deputy Speaker of Parliament, Anita Among, has given a pep talk to Members of Parliament and staff preparing for the forthcoming East African Community Inter-Parliamentary Games urging them to defend their title.

The Parliamentary team is currently training for the games to be held in Arusha, Tanzania from 4th -17th December 2021. The national parliaments of Uganda, Kenya, Tanzania, Burundi and the East African Legislative Assembly (EALA) will be participating in eight sports disciplines that include football, netball, volleyball, tug of war, golf, basketball and darts.

In a meeting held between the leadership of Parliament and the captains of the different sports disciplines on Wednesday, 17 November 2021, the Deputy Speaker encouraged the team to even perform better following the support from Parliament.

Among said government gave the Parliamentary Commission assurances of funding towards sports. She noted that since the money availed is not enough, only core players will be facilitated to travel.

When Uganda hosted the games in 2019, the Ugandan Parliament emerged overall winners after taking home the football, netball and basketball trophy for both men and women.

Now as team Uganda finalizes its training, the task ahead is for them to defend their title and also emerge as winners in other categories.

The Government Chief Whip, Hon. Thomas Tayebwa, who is also a golf player, hailed the Deputy Speaker for championing the cause of sports noting that it was her personal initiative that led to a breakthrough in getting funding.

Honourable Mathias Mpuuga, the Leader of the Opposition in Parliament, observed that sports requires all the support that it deserves because apart from enhancing health and wellbeing, it is a stress reliever. Also present in the meeting was Hon. Asuman Basalirwa, the Captain of the Parliament team.

The EAC Inter-Parliamentary Games is key to enhancing relations between the East African Legislative Assembly (EALA) and the National Assemblies in the region.