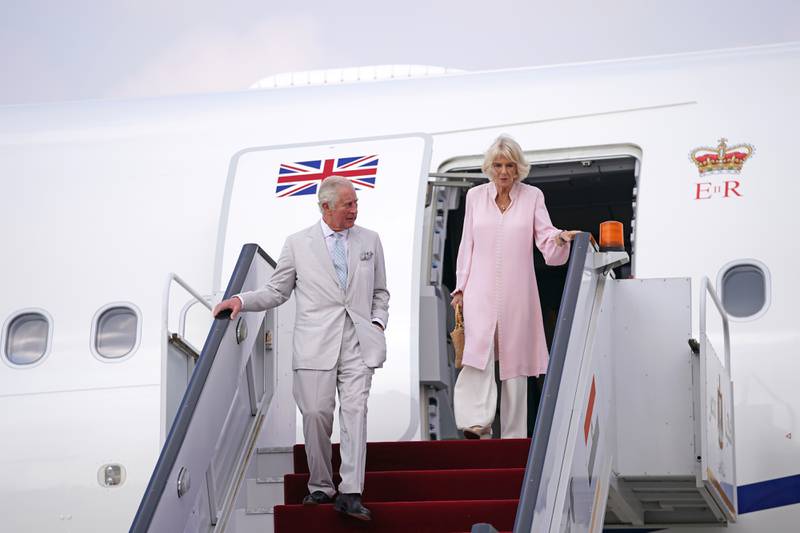 The Prince of Wales and his wife the Duchess of Cornwall arrive at Cairo airport in Egypt from Jordan, on the third day of their tour of the Middle East.
Kamal Tabikha
Cairo

The Giza plateau and parts of Old Cairo have already been secured ahead of the prince’s visit. Several markets were not allowed to open on Thursday for security reasons, particularly in areas of Islamic Cairo which have direct access to Al Azhar Mosque, where the prince is set to meet the Grand Imam of Al Azhar.

“We were asked on Wednesday night to clear out of the Giza complex and instructed to take our camels and horses out of the area before 2pm on Thursday,” said a tourism worker at the Giza Pyramids.

He told The National that tourists would be allowed to stay in the complex during the prince’s visit to keep the area busy to highlight the recovery of the country’s tourism sector.

The royal couple are expected to head to Cairo’s old quarter and the Giza Pyramids before making the two-hour journey to Alexandria, where they are set to visit the Bibliotheca Alexandrina along with some of the coastal city’s most prominent landmarks.

The Prince of Wales and Duchess of Cornwall arrived from Jordan, where they met environmental activists, fellow royals and visited the city of Gadara — a major Roman settlement in the Middle East — as well as the site on the Jordan River where Jesus is believed to have been baptised.

In Cairo, the couple will discuss environmental issues at the Al Ittihadiya Presidential palace with Mr El Sisi, who attended the Cop26 climate summit in Glasgow, UK, earlier this month and is hosting the next conference in the Red Sea resort city of Sharm El Sheikh in 2022.

In office since 2014, the Egyptian leader has been paying growing attention to the environment, encouraging the development of renewable energy and seeking to reduce pollution in large cities such as Cairo and Alexandria.

Prince Charles’s meeting with the Grand Imam of Al Azhar, Sheikh Ahmed El Tayeb, is of particular importance given his interest in interfaith dialogue.

Sheikh El Tayeb, for his part, has forged close relations with the Vatican and has also met the Archbishop of Canterbury, the most senior clerical figure in the Anglican Church.

The Al Azhar mosque in Cairo’s old quarter was built more than a 1,000 years ago and has become one of the foremost seats of Sunni Islamic learning.

The old quarter is also home to the Khan El Khalili bazaar, sites dating back to the Mamluk and Ottoman eras, and the city’s historic gold market and tea houses.

The heir to the British throne is expected to make comments on interfaith dialogue when he visits another major Cairo attraction, the Giza Pyramids just west of the capital.

Britain’s Prince Charles and his wife Camilla, Duchess of Cornwall, leave Jordan to fly to Egypt on the third day of their tour of the Middle East. Reuters

Prince Charles’s visit comes at a time when Egypt and Britain are enjoying close relations, with Mr El Sisi and Prime Minister Boris Johnson in regular contact about regional issues.

His visit to Egypt and Jordan went ahead despite concerns over Queen Elizabeth II’s health. But Prince Charles said in Jordan that his mother is “all right”.

“Once you get to 95, it’s not quite as easy as it used to be. It’s bad enough at 73,” he quipped in comments to Britain’s Sky News in Gadara.